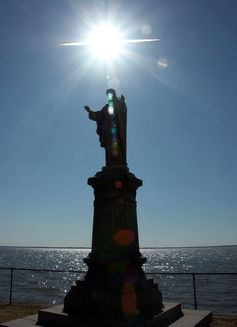 Teaching any sort of academic program with religious content can be a tricky undertaking. Religious passions, whether pro or con, can be volatile; religion is a matter about which people can become upset.

My doctoral studies were in the relatively safe arena of Greek philosophy – no-one really cares what you say about Socrates and his mates these days – but I taught Religious Studies for many years and it was, by comparison, a minefield of sensitivities. In all those years, however, I managed to only really upset somebody once.

The student in question was a mature French lady, and she took great exception to my matter-of-fact announcement in one lecture that Easter had many pre-Christian associations and had its roots in ancient pagan festivals.

She went blue in the face, spat out several French expletives, stormed out of the lecture hall and never returned.

I was surprised by this because I regarded the pagan roots of Easter to be an uncontroversial matter. For a start, the word itself, “Easter”, is usually regarded as being derived from Anglo-Saxon forms such as “Estara” or “Ostara” (and cognates) associated with a dawn goddess and common spring festivals celebrated in the British Isles and Northern Europe long before Christianity. According to some, those associations extend back to the Babylonian deity Astarte.

More obviously, the ubiquitous egg given as a gift (or munched as a chocolate indulgence) at Easter is a widely employed fertility symbol that signals the rebirth of vegetation and the end of animal hibernation after the northern hemisphere’s winter. (If you tend backyard chickens, as I do, you’d understand.) There is certainly nothing Christian about the Easter egg; it is pre-Christian and, more to the point, pagan in its history and its associations. That the Easter festival has pre-Christian, pagan layers of symbolism, therefore, I regard as an incontestable fact, but it seems that even such a “given” can be contested and can upset some people; such is the nature of religion, a field of cherished certainties.

The real source of the French woman’s peeve, I suppose, is the broader implication that there are pagan elements in Christianity. That is all I was suggesting, and again it seems to me a matter that should not rouse controversy. Nor does it detract from Christianity – on the contrary, it can and should be seen as a part of the accumulated richness of the Christian tradition.

When Christianity moved into pagan regions – especially in Europe – it would sometimes adopt the tactic of ruthlessly eradicating the existing religious culture. More often, though, it took the more pragmatic and compassionate approach of absorbing and adapting pagan rites, sites and institutions wherever they were not entirely inimical to the Christian spirit.

Rather than being manically hostile to all things pre-Christian, many of the wisest figures in Christian ideas – St Augustine is a conspicuous example – took the view that the pagan religions had, in their way, prepared the ground for Christ and that Christianity was not so much a replacement for paganism but a fulfilment of it.

In this way local pagan deities became Christian saints and Christian churches were built on pagan sacred sites. It was not so much a matter of invasion and eradication as a matter of adoption and conversion. The same held true for festivals and holy days. Christmas and Easter are obvious instances. Both are cases where Christ has been assimilated to aspects of pre-Christian solar worship and the mythos of the dying and reborn sun that is a guiding reality in the life of any agricultural people.

Christmas was assimilated with Yule and related festivals at mid-winter and Easter was assimilated with festivals celebrating the rebirth of sun in the spring. In doing this Christianity showed itself to be not some new, freakish creed from the Middle-East, but rather the fulfilment of great spiritual traditions extending back to the dawn of history.

Christ, moreover, was not just an obscure Jewish carpenter from Palestine, but, as the New Testament insisted, the Prince of Creation, the Logos, who was from the very beginning and who was not unknown before the Incarnation. Appreciating the pagan assimilations of Christianity enriches the Christian tradition; denying them impoverishes it.

It is true that some people use the pagan assimilation of Christianity to supposedly “expose” and undermine the Christian faith. It is a sort of “gotcha” polemic used by anti-Christians and atheists. But that is a simplistic misconception and it need not be the case.

To show that Easter or some other aspect of the Christian tradition has pagan or pre-Christian roots only demonstrates the wealth of the tradition. Living traditions are always like that. They soak up what came before them. Buddhism did much the same in its spread through Asia. Even Islam, for all its official hostility to pagan idolatry, soaked up, absorbed and assimilated, much of pre-Islamic Arab customs.

The sacred month of Ramadan was celebrated long before Muhammad. We should not be surprised that this is the case. Religious traditions never enjoy a tabula rasa. They are at their most destructive and self-defeating when they deny all that came before them. Conversely, they are at their most creative and fertile when they transform all the best things that came before them. Easter is an example of this. Not only did Christianity transform and sublimate the meanings of the Jewish heritage upon which it was built – Easter is a transformation of Passover – but as it moved into pagan Europe and beyond Christianity absorbed and reshaped much of the pagan order that came before it and it is richer for doing so.

It is even arguable, paradoxical though it might seem, that it preserved and nurtured much of the ancient pagan order that had already fallen into decadence and decay from the degradations of the Roman Empire. In any case, the proposition that Easter is a 100% purely Christian affair is manifestly unsustainable. You will find it presented as such by Christian apologists – especially of the literalist Protestant persuasion – but it shows an ignorance of history. Worse, it shows a failure to understand the way that religious traditions work and of the rich organic patterns of tradition that they weave, often at odds to their own rhetoric.

Religions are complex things. They have to be because human beings and life itself is complex. To fail to appreciate this fact is exactly the sin of the fundamentalist. Reality is seething and variegated; they want it to be sterile and monochrome.

The modern fundamentalist also fails to appreciate what is sometimes called “cosmic” religion. This failure is a symptom of modern, abstracted urban life. We are removed from such great cosmic facts as the turn of the seasons and the cycles of the sun.

For most Christians in the past Christ was much more a conquering solar deity who overcame the dark trough of winter and was reborn with the new grass at the spring equinox than he was an historical person.

This is what Easter is about, why it is celebrated at the first moon after the equinox and why it became assimilated to the same cycles and themes from pre-Christian times.

By Rod Blackhurst, Honorary professor, College of Arts, Social Sciences at La Trobe University. This article was originally published on The Conversation. Read the original article.