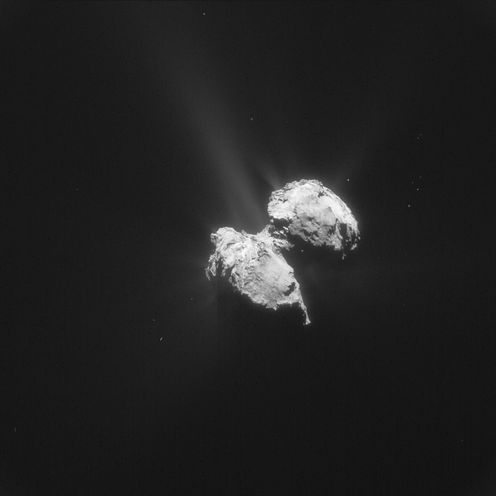 It has been a busy year for Solar System exploration – and particularly our galactic neighborhoods small icy bodies. Comets, asteroids, Kuiper Belt Objects and planetary satellites have all been in the news – from stunning images of comet 67P Churyumov-Gerasimenko at the start of the year, to the recent close-up of Saturn’s moon, Enceladus, via Ceres and Pluto.

Early January was a continuation of the stream of data from Rosetta, as comet 67P drew closer to the sun. Images were released of jets emanating from the sun-facing surface, from which it could be seen that sublimation of water-ice increased during the daytime, and died down at night. But because the dark surface of the comet retained some heat, the comet was not completely inactive at night – it was possible that fluid might exist for very short periods, leading to sub-surface hydrous activity.

One of the other significant results from Rosetta was recognition from magnetic measurements that the two lobes of the comet had been separate bodies, presumably brought together by collision.

Closest approach to the sun was in mid-August, a few weeks after the Philae lander signaled that it had woken up after its enforced hibernation. Unfortunately, communication between Rosetta and Philae could not be established reliably, leaving a certain amount of frustration that additional data could not be acquired from the surface.

Welcome to Pluto (and Charon) July brought us a close-up of Pluto. The images have been tremendous, turning Pluto from a fuzzy gray blob into a fascinating body of mountains, plains and valleys. Pluto’s closest, and largest, moon, Charon was also captured by the New Horizon mission cameras in similar detail. The two worlds are very different in their characteristics.

Parts of Pluto’s icy surface are crumpled into mountains and ridges. The “heart” of Pluto, around 1500 km across, is a flat and featureless plain, presumably resurfaced relatively recently, showing that Pluto is more active than anticipated. Charon, with approximately half the diameter of Pluto, is also a world of contrasts. The southern hemisphere is flat, relatively smooth and low-lying, broken mainly by impact craters, while the northern regions are fractured with much more topography. Separating the two halves of the moon is an extensive system of canyons, perhaps akin to the Valles Marineris on Mars, probably caused by tectonic stress.

Mission scientists have suggested that the southern region is younger than the northern, and has been resurfaced by cryovolcanism – instead of lava, cryovolcanos eject substances such as water, methane or ammonia – implying a frozen ocean below Charon’s crust. It should be remembered that the wealth of data now returning to Earth from the New Horizon’s spacecraft was acquired during a fly-by of Pluto that lasted a mere 15 minutes. Imagine what could be learnt with an orbiter.

The Dawn mission to Asteroid (1) Ceres was a bright spot – literally – in the planetary exploration calendar. At the start of the year, the spacecraft began to orbit the dwarf planet, and images revealed several patches of highly reflective material. At first it was suggested that the patches may be of water-ice. This would be unexpected, since the surface of Ceres is too warm for water-ice to be stable at the surface. It is now thought that the bright spots might be salts remaining following evaporation (or sublimation of water).

A ball of mud

Ceres is currently thought to be like a ball of compressed mud, possibly with a layer of water-rich slurry below a thin crust of mud – not an attractive description for the largest of the asteroids, but one which clearly shows that the minor planet has had a lengthy history of aqueous activity.

This is important because, like comets, asteroids have played a significant role in the delivery of water and other volatile compounds to Earth. The Dawn spacecraft spent most of 2015 orbiting Ceres at gradually decreasing altitudes – settling, at the beginning of December, in its lowest orbit about 400km above the surface.

Images have shown that Ceres is crossed by troughs and grooves reminiscent of those present on other (larger) planetary bodies. Some of the features are impact-related, but some seem to have been produced by stress fracturing of the crust, another example of Ceres' puzzling and sometimes contradictory history. The oceans of Enceladus

Although the Cassini mission has been operational within the Saturnian system for over a decade, and is coming to the end of its life, it is still returning exciting data from the icy moon, Enceladus. In October, the spacecraft took a dive through the plume at the south pole, flying only about 50 km above the surface.

Then, only earlier this month, Cassini completed its final close encounter with Enceladus, giving us pictures of frozen fractures and ridges. We know that Enceladus has a sub-surface global salty ocean – placing it with Jupiter’s moon, Europa, as a possible host to an ocean-floor ecosystem. The amazing images that have come from the missions to icy bodies have generated a great increase in public interest in Solar System exploration. A quick trawl through social media sites such as Twitter shows how avidly the missions are followed and results discussed, almost in real time.

If 2015 was a Golden Age for the exploration of small icy bodies, we can only hope that among the legacies of the missions is a generation of students enthused to continue investigation of our neighbourhood.

But what may be in store for small icy bodies in 2016? Work has only just started for the cameras on board Dawn, as the spacecraft starts its mapping of Ceres. There will be more images and information from Pluto and its satellites, especially Charon.

Cassini has made its final close fly-by of Enceladus, and the images will be returned throughout the coming year. Rosetta will watch 67P’s activity die down as the comet moves further and further away from the sun. But before we say a complete goodbye to comet Churyumov-Gerasimenko, maybe, just maybe, we will hear from Philae…