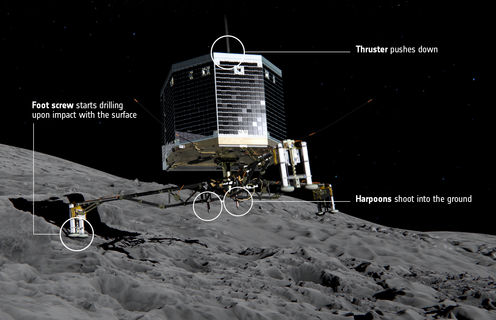 The first attempted landing on the surface of a comet is a huge landmark in the history of space exploration that will not only uncover further details about comets but could unlock further clues about the origins of our solar system and the development of life on Earth.

Comets are the icy remnants of the phase of planet building in our solar system, some 4.5 billion years ago. Thousands of them have been seen orbiting our sun and hundreds have been studied by Earth-based astronomers.

From these measurements we know that a large proportion of a comet is made of water-ice. This turns to vapor when heated by the sun, producing a transient atmosphere around the comet together with microscopic “dust” particles, eventually flowing into the the tails for which they are so well known.

Not only are comets fascinating bodies in their own right, they may also be the original source of much of the water on our planet. Many lines of research point to a hot, dry Earth in the early days of the solar system. While it is possible that some water was released from the Earth’s interior at this time, the suspicion has always been that comets delivered the rest when crashing into Earth.

We have been afforded a clearer picture of the composition and physical evolution of comets since 1986 when the European Space Agency (ESA) sent the Giotto spacecraft to study Halley’s Comet. Several others have followed, but all have only provided fleeting glimpses. Now the robotic Rosetta spacecraft is carrying out the first proper rendezvous with a comet.

The Rosetta launched in 2004 and completed three fly-bys of Earth and one of Mars en route to its destination. On August 6th of this year it matched trajectories with comet 67P/Churyumov-Gerasimenko and arrived within 100 kilometers of the icy nucleus. Since then European and American scientists have analyzed the 2.5 mile-long body via optical and infra-red imaging, and sampled the gas and small solid particles – comet dust – being released from its surface.

The onboard spectrographs, mass-spectrometers, microscopes and plasma sensors have been used to characterize the nucleus of the comet and the material it is already releasing while still more than 250m miles from the sun. Landing on a comet

Once the attached Philae lander is released, it will spend seven hours slowly descending to the surface. Philae has its own suite of instruments and cameras which will enable it to fully characterize the surface environment of a comet for the first time.

The isotopic, molecular and structural properties of a 4.5 billion-year-old time capsule will be freshly revealed.

Philae is an engineering marvel in itself – the gravity on the comet’s surface is so weak that an astronaut could easily jump up and escape from its gravitational pull. To make matters more complicated, the structure of the surface is relatively unknown. So how do you make sure a lander sticks to the surface and doesn’t bounce back into space?

For Philae, the answer comes in the form of two harpoons, ice screws on its three landing legs, and a small thruster to hold it down. Plus, given the surprisingly rugged surface of the comet as photographed by the Rosetta spacecraft, a few crossed fingers back at mission control.

Assuming success, Rosetta and Philae will spend the coming months refining their measurements at comet 67P and showing us for the first time how these bodies evolve and erode as they approach the sun. Central to this will be studies of the comet led by Ian Wright at the Open University.

By the time comet is closest to the sun next August, Philae will almost certainly be dead. Rosetta is due to stay with the comet until at least December 2015 – but right now, a scientific treasure trove awaits.