Why Rosetta Is The Greatest Space Mission Of Our Lifetime
By The Conversation | November 6th 2014 04:30 AM | Print | E-mail 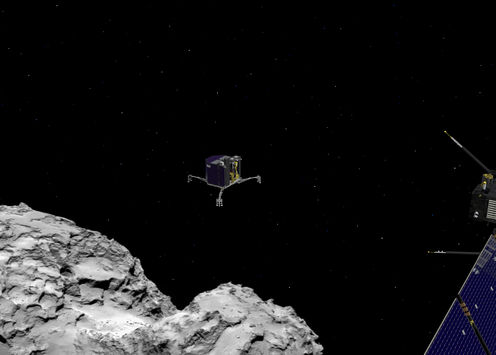 By Natalie Starkey, The Open University

With only a week to go before the Rosetta spacecraft drops its Philae lander onto the surface of comet 67P, I wonder whether there will be another space mission in my lifetime that is so inspiring.

Part of what has been so impressive is the length of time this mission has taken to finally get to the comet – 20 years since planning began (when I was still in high school), ten years since launch (when I was studying for my first degree). I feel very lucky that I am now employed as a space scientist at a time when all this work is coming to fruition.

Rosetta has now reached the bizarrely shaped rubber-duck comet and it has spent three months mapping its surface in the hope of finding a suitable spot to place its Philae lander. This is a huge feat in itself. It is the first time a spacecraft has entered into orbit around a comet, which is a celestial body with almost no gravity.

The images Rosetta has sent back have allowed us to learn so much about this never-before-seen world. The European Space Agency (ESA) can already be proud of its achievements so far.

The Philae lander – packed with a science laboratory, harpoons and even ovens – gives the ESA a chance to do more. The hope is that Philae will help answer some of the most basic questions about our existence.

The original ambition for Rosetta was for it to be a sample-return mission: land on a comet and bring back samples to analyze on Earth. But the crippling costs of achieving this meant that it had to be scaled back: how about we just land on a speeding comet instead?

This strategy may cost less overall, but it wasn’t going to be much easier. On November 12, when Philae attempts to land, all manner of things can go wrong. The gravity of 67P is so small that Philae could hit the surface, bounce off and be lost in the emptiness of space.

We will nervously wait for news about Philae’s fate. After Philae leaves Rosetta, it will take about seven hours to reach the comet surface. If Rosetta achieves the comet landing, I believe it will be the most exciting space mission of my lifetime. (Of course, I wasn’t alive for the Apollo landings which will remain the most amazing space missions in history).

One could argue that there are many other missions in recent years that are just as impressive, if not more so, than Rosetta. It is usually the ones with the big backing from the US space agency NASA, such as the Curiosity rover mission that spring to mind. However, most recently I was impressed with the Indian mission, Mangalyaan, that entered into Mars orbit this year after a ten-month journey – and with a tiny budget.

However, I have to admit, it sneaked up on me – I wasn’t really aware of Mangalyaan until a couple of days before the orbit was announced. This is where we find that a bit of quality promotion goes a long way.

Just take NASA’s Curiosity as an example, which continuously shares images of Mars' surface. Even before it reached there, videos such as such as the famous seven minutes of terror captivated audiences. The mission itself is of course impressive. Mars is about 150 times farther from the Earth than the moon. And the crazy sky-crane landing, getting it down successfully I was sure it would end in failure. But it didn’t. The science continues to beamed back by the rover.

ESA has started to play catch-up with NASA and its most recent video release, called “Ambition”, really took me by surprise. It is definitely something out of the ordinary: a big-budget-style sci-fi movie, with famous actors, such as Aidan Gillen of Game of Thrones fame, and a subtle yet powerful message relating to the Rosetta mission.

Whatever the movie cost to make, it was definitely worth it. We desperately need to inspire the space scientists of the future – and I spend a lot of time in schools chatting to children about their life ambitions in the hope they might want to follow me on a science career path.

My main words of advice to these children are similar to those that most stuck with me: aim high. I wanted to be an astronaut, so maybe I haven’t made it there (yet), but being a space scientist in such amazing times, when we are attempting to land on the surface of a comet, is not a bad second best.