There is bad news for those planning to go to Mars in the near future: a study in mice has suggested that radiation in space could cause cognitive decline in astronauts. However, we know from past research that mental, social and physical exercise can boost cognitive functions. With planned Mars missions moving ever closer, it might be be worth exploring activity as a way to counter radiation damage.

There are many hurdles to overcome to get to Mars. The obvious one, of course, is the amount of time it takes – about eight months. But for those brave enough to attempt such a journey, this may well be acceptable. What could be harder to accept, however, are the harmful galactic cosmic rays you’d be subjected to, produced by supernovae far away from Earth. This is a form of radiation that we already know damages the body and increases the risk of cancer.

Worse still, a new report suggests that this type of radiation also damages the brain. In this report, scientists exposed mice to charged particles at the NASA Space Radiation Laboratory. Six week later, they tested the memory abilities of these animals. Unfortunately for those eager to go to Mars, the news was not good.

The scientists used two tests of memory. The first is perhaps the simplest test available for mice: novel object recognition. Mice spontaneously explore new objects placed in their environment, but eventually get used to the objects and spend less time near them.

The task exploited this tendency by first presenting the animals with two identical objects, such as small statues. After the mice had spent some time exploring these, the researchers replaced one of the statues with a different object, for example, a salt shaker. If the mice had remembered exploring the statue, they would show a spontaneous preference for the salt shaker.

But after receiving a dose of radiation, the mice showed significantly less preference for a new object compared to mice who had not been irradiated. Indeed, depending on the type of charged particles that the mice were exposed to, in some instances they had next to no preference for the new object. This indicates that they did not remember the object they explored first. Can I get directions, please? Duncan Hull/flickr, CC BY

The researchers also did a second test placing one object in one location and a different object in another, within the same environment. The experimenter then moved one of the objects to a new location, while the other remained in the same place. Ordinarily, the mice would have spent more time exploring the displaced object compared to the object that had not moved.

This indicates that it had learnt the location of each of the two objects. Again, following radiation, the mice did poorly. For several of the doses of charged particles, the animals showed essentially no preference for the displaced object. In short, they either failed to learn the association between the object and the location in which it was initially placed, or they were unable to remember it.

So what was the underlying reason for these results? The scientists conducting this work next looked in detail at the neurons – the brain’s functional units – of the mice. In specific regions of the brain, the dendrites – the part of the neurones receiving inputs from other neurons – were less branched. In addition, the specific portions of the neurons where communication takes place, the dendritic spines, were also reduced following exposure to radiation. Mice with the largest loss of spines had the worst memory. 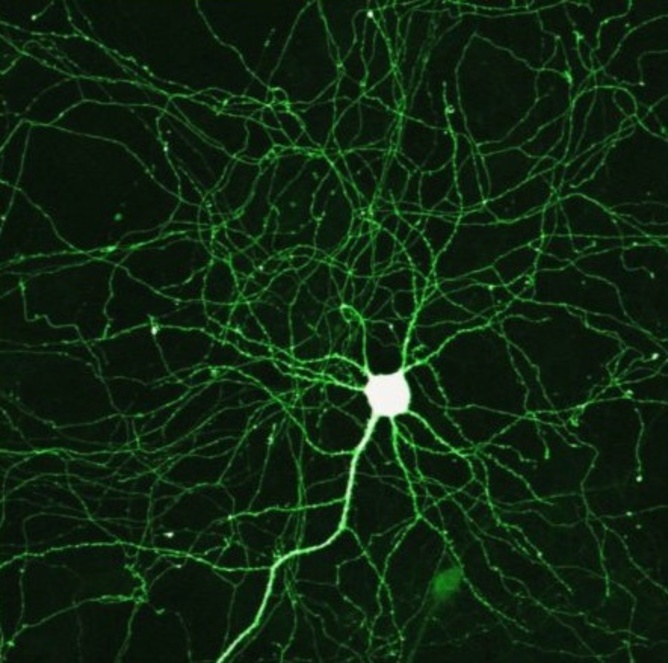 Neuron in the brain Mike Seyfang/flickr, CC BY

Of course we already knew that radiation is bad for you and that cell death is related to memory problems. While the research may have implications for astronauts, it is most likely not as simple as humans getting their neurons fried on the way to Mars and inevitably ending up demented. We now know that the brain is plastic and that the relation between brain damage and memory loss is complex.

So while the loss of connections between neurones likely contributes to the cognitive deficits in dementia, the rate at which this occurs may depend on what you do with your brain, how active you are and what experiences you seek. Current dementia research, for example, indicates that activity is protective. It seems that any activity – be it mental, physical, or social – to an extent protects the brain from succumbing to the worst ravages of dementia. In particular, learning and meeting new people are effective.

Ultimately, memory is based on synaptic plasticity, which is the ability of synapses to strengthen or weaken over time. By introducing extra activity which encourages such plasticity it may be possible to counter radiation damage to the synapses. What would be really useful is research that looks at the consequence of radiation in mice that are staying active and training their memory. If activity does indeed counteract the effects of radiation we could perhaps safely travel to Mars anyway – as long as we play chess and go on Skype dates on the way there.