Home > Physics > A Theory on (just about) Anything

David Halliday
Since "spacetime" is simply a term for a space that has a component we call "time", we need only concentrate on spaces in a somewhat general sense.  Now, as Derek Potter, on this site, pointed out to me, a little while ago, "To us, a space is somewhere to put a box :)"  So, let's take a short "detour" to address what we will mean by a space, in this series.

Einstein did something very different with his General Theory of Relativity.  Something that had not been done in science anytime before that.  He actually separated the space "where we put a box"—the space of "places" or locations—from the space of "directions" or vectors (velocity, acceleration, momentum, electric and magnetic fields, etc.).1

The space of locations is called a manifold.  This is probably an unfamiliar term for many (except that those familiar with automobile engines know about intake and exhaust manifolds).  You can just think about a manifold as being the set of all possible locations, possibly on some high dimensional curved "surface".2

We are all familiar with a curved manifold, and the tangent spaces to that manifold:  The surface of the Earth (whether considered to be a smooth sphere, or as a sufficiently smoothed version of the actual location complete with hills, mountains, and valleys) is a two dimensional manifold.  The tangent space to that manifold, at any given point on that manifold, is a mathematical (Euclidean) plane, which we can imagine—or, in some cases, partially

construct—at any given point on the Earth's surface.  Some ways in which we may partially construct or realize a tangent space at a point on the surface of the Earth is when we level a portion of the ground for the foundation of a building, or lay a board or sheet of glass on the ground.

So, from here on, we shall be only considering the tangent space—the vector space.  So we will no longer have to consider the collection of locations that is the manifold, even if it is flat.3

Mathematicians define a vector space in the following manner (underlined words/phrases are terms that are being defined):

Let F be a (mathematical) field (like the Real or Complex numbers).  A vector space over F (or F-vector space) consists of an abelian group4 (meaning the elements of the group all commute) V under addition together with an operation of scalar multiplication of each element of V by each element of F on the left, such that for all a,b ∈ F (read a,b in F, or a,b elements of F) and α,β ∈ V the following conditions are satisfied: 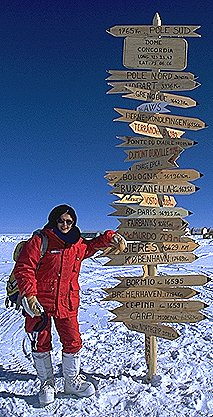 The important takeaway message is that a vector space contains things we call vectors, that have some "amount" in some "direction" (hence the reason we tend to depict them using arrows of various lengths pointing off in different directions).  These vectors can be added together, without having to worry about what order we add them (just like with ordinary numbers), to produce new vectors.  We can multiply these vectors by scalars—numbers like Real or Complex numbers—to also produce new vectors.  And the operations of adding vectors and multiplying by scalars can be combined in what would seem to be the "usual way" from our experiences with plain old ordinary numbers (Counting Numbers, Integers, Real and Complex numbers), via the operations shown in V2 through V5.  Other than that, the definitions simply make sure everyone is working with these things in exactly the same way, to avoid misunderstandings.

Remind me, why are we concerned about "vector spaces"?  Because, like the picture to the right, we use directions and "amounts" of things (like distance, speed, acceleration, electric and magnetic field, etc.) both in everyday life, and especially in physics.  Such seem to be reasonably natural, quite expressive, and useful.

The problem is that, at this point, we don't have any real way to determine magnitude, and even direction—especially of one vector relative to another—is not well defined.

OK.  Let's take care of this magnitude and direction issue...

All right, so what's so mysterious about having a dot or inner product?  Well, the real question is what is the inner or dot product?

This can all be succinctly summarized (for those that are comfortable with the terms) by stating that the dot/inner product is a positive-definite Symmetric bilinear (Hermitian) form.

The truth is, we now have, with this inner or dot product, the METRIC (hear sound of this shout, in a deep bass voice, reverberating off the mountainsides...).  We simply need to take a closer look, expanding the vector space in terms of a basis (as we always can do for a vector space), and, ultimately, relaxing condition D3, the positive-definiteness condition.

That's what we will be addressing next time.

1  Bernhard Riemann, a mathematician, created the geometry that caries his name in the nineteenth century in order to handle the geometry of curved surfaces without having to consider how such surfaces may be embedded in some higher dimensional space.

2  The inner or outer surfaces of intake and exhaust manifolds can be considered as examples of two dimensional manifolds, in this sense.

3  A flat manifold can be identified with its tangent spaces:  All the tangent spaces can be identified with one-another (made "the same"), and the flat manifold can then be considered to be "identical" to this tangent space.  This is what "allows" the usual physics where vectors, such as velocity, etc., can "appear" on the same space as displacement vectors (straight line movement from one location/point to another), and actual locations/points (and collections of such, like boxes and other objects).

4  An abelian group (over addition) is a group where all elements commute:  So, for a,b ∈ A (read a,b in A, or a,b elements of A), a+b = b+a.  Mathematicians define a group in the following manner:

Some will note that this list of axioms is missing "closure".  Very good!  This is because the text that I have used defines a "binary operation" in the following manner:

5  I know that Quantum Mechanics "needs" the Complex numbers.  However, even then, the only numbers we humans ever see from a Quantum Mechanical experiment are, again, always Real numbers.  Besides, we are dealing with classical level "things" (like velocities, accelerations, electric and magnetic fields, etc.) for the sake of this series.

6  It's actually not difficult to generalize an inner product space to being over the Complex numbers.  It's just that it will help (I believe) if we are a little bit more focused, here.

A Theory on (just about) Anything
More Articles All Articles
About

I am a Ph.D. Theoretical Physicist.  Not that that makes me an expert, or anything.

In fact, right now, I am working in the Environmental...