Tommaso Dorigo
I know, the title of this article will not have you jump on your chair. Most probably, if you are reading these lines you are either terribly bored and in search of anything that can shake you from that state - but let me assure you that will not happen - or you are a freaking enthusiast of heavy flavour physics. In the latter case, you also probably do not need to read further. So why am I writing on anyway? Because I think physics is phun, and rare decays of heavy flavoured hadrons are interesting in their own right.
Still here? Okay, then let me qualify the above statement. Heavy flavoured hadrons are ones containing at least one bottom or charm quark. They are special because their phenomenology is quite rich. The heavy quark has a lot of rest energy to disperse, and yet it cannot do it easily, since the only interaction that can change its flavour is the weak one. Weak interactions operate slowly. So heavy flavoured hadrons live an incredibly long time, comparatively speaking. We have then ways to detect their decay as well as study the phenomenology in detail.

In addition, heavy quarks speak louder to the Standard Model Lagrangian: they have more to say about fundamental interactions. For one thing, they couple more strongly than light quarks to the Higgs boson, so this makes their phenomenology more interesting. Not only do Higgs bosons decay frequently to bottom or charm quark pairs. Because of the long lifetime of the b quark, loop processes inside B hadrons, involving new particles not predicted by the standard model, could one day become measurable: this "indirect" observation of new physics is a not-so-secret hope of  many of my colleagues who specialize in B physics.

Loop processes, what are they? Huhm, let me try and explain. Imagine you are a bottom quark. You live inside a neutral B hadron, and spend all your life bouncing gluons off your pal Joe, an anti-down quark. Occasionally, though, you exchange other, rarer vector particles. This is fun, as when you do you may temporarily change appearance. Indeed, if you throw at Joe a W boson, you become a shining charmed quark. Typically this won't last for long, as Joe will usually throw back another W at you (otherwise the B hadron has decayed to a D hadron!), and when you catch it you'll turn back into the overweight bottom quark you've always been.

You just took part in what is addressed to as a loop process: the "loop" is a time-space path whose four corners are the points of emission and reabsorption of the W boson by Joe and you.

What Belle did (and reported here) was to look in a large sample of electron-positron collisions, whose energy was tuned such that pairs of B hadrons were copiously produced. The resulting data was sorted out to select candidates for the interesting, rare decay process shown below. In words, a neutral B meson (a particle composed of a anti-bottom quark and a d quark) turns into a charmonium particle (one made up by a charm and anticharm quark, of which the X(3872) is one instance) by emitting a quantum of electromagnetic radiation, a photon. Ain't that magical? You look at a substance, and poof! a flash of light is emitted, and the substance has transmuted into something entirely different. Alchemists would drool by even hearing that this is possible. And it is. 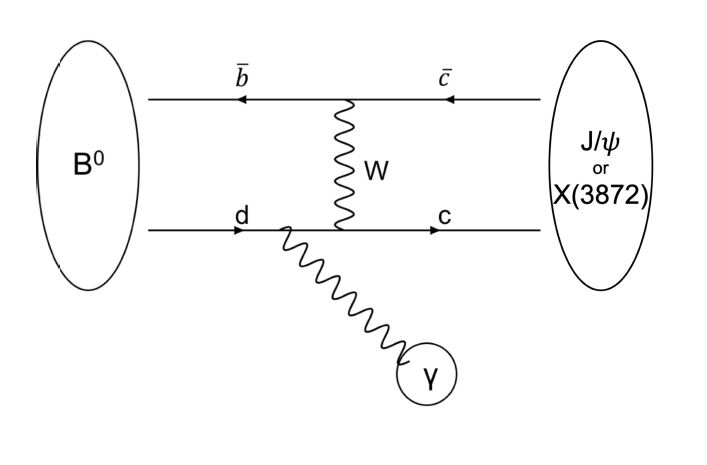 In the diagram, you can see that there is an emission of a photon by a quark line. This is incredibly interesting: seeing that photon equates to taking a snapshot of the B hadron while it is pants down, engaged in another weak exchange.

Note that the pictured diagram is not a loop process, but other loop processes not pictured do contribute to the rate of the discussed decay. What's intriguing is that by precisely comparing the rate of occurrence of those processes with the theoretical predictions we can verify whether within those additional loops everything that takes place conforms to the Standard Model, or whether instead there is some intruder, a new particle that alters the rate of such rare processes.

Also note that, without the emission of the photon, the neutral B hadron could never have turned into a charmonium particle (like the J/psi or the sought after X(3872) meson), as doing so would violate at least a couple of iron-clad physical laws (energy and angular momentum conservation).


Now, a very useful law of physics states that "everything that is not forbidden is mandatory". Stated differently, if a physical process does not violate any law (e.g., if it does not create energy out of nothing) then it is guaranteed to occur. Maybe it will be so exceedingly rare that you stand no practical chance of observing it, but still, there is a chance for it to occur, and it will, if the system is given enough time.

If we think at macroscopic objects, this law is actually quite surprising. In principle, if you took a pot of water at room temperature, and looked at it for enough time, you would likely see it turning into a block of ice, one day. That's because, with a very small probability, all water molecules may conjure their trajectories up in such a way to form a stable crystal structure. This does not violate any thermodynamical law, as the decrease in entropy can be made up by a corresponding increase somewhere else.

Unsurprisingly, watching a pot of water for 10^(10^10) years (am just throwing there a random, very large number - I haven't made any calculation) is not my idea of fun. Instead, in the microscopic world the law is more useful, as it allows to sort out what can not occur, such that if we see it happening we are sure that our description of Nature (the bitch, not the magazine) need to be enlarged with some additional particle or interaction.

The Belle measurement does not do that - for starters, the Belle scientists were not able to detect the very rare process, which the Standard Model does not rule out, but which indeed they should not have observed in the absence of new physics. But the measurement is already a step in the right direction, as new physics could indeed have made the decay mode observable.

To be quantitative, Belle established that the considered decay occurs with a relative probability of less than half a millionth. I.e., if you take 2 million neutral B mesons, you should expect to see less than one of them to decay that way. Since an upgraded version of the detector, now called Belle II, has just started taking (lots of) new data again, it is to be expected that much more precise and stringent limits will soon be produced on this and other rare decays. And, who knows, maybe the improbable will happen one day!