Tommaso Dorigo
Have you ever looked at the moon through a telescope, or even a pair of binoculars? Our satellite is really beautiful to look at - it is full of detail you can get lost in: craters, mountain ridges, canyons, plateaus. And there's no clouds to obscure the view (if you are a planetary observer and you put an eye on Mars a couple of years ago you know what I mean - a dust storm that went on for weeks completely hid the surface from outside observers).
As a 7 years old, when I first set my eyes on the moon with a small 1.66" refractor telescope, I was totally awed by the sight, and even now, 47 years later, I sometimes find the stamina to mount my 16" Dobson telescope and give a look at the moon for its own sake. My telescope of course produces gorgeous views of such an easy target, but it is rather designed for planetary and deep sky visual observations; I occasionally take it to a dark place in the Alps to watch galaxies and nebulae, but much more often I content myself with moon and planets from my urban home location.

Yesterday evening I decided that the clear sky, the quarter-moon still not so low in the evening sky, and the rising, well-positioned Mars were enough of a target. You have to know that a Dobson telescope, especially if largish, is not something you set up in a minute: it is made up by several pieces you need to assemble. The mirror itself weighs 30 pounds, and a number of operations that require a certain amount of effort and dexterity are needed to carry out the operation. And after you have assembled it, you need to align the optics - something that takes another 5 to 10 minutes. But once you are done, there is one further factor to consider: the mirror is warmer than the night air, and it requires time to cool down!

A warm mirror creates turbolence in front of it, seriously worsening the resolution at the eyepiece. And since the mirror is made by 2-inches-thick glass, it may take hours for it to cool down properly. Some instruments have fans aroudn the mirror, which  expedite the process, but not mine. All in all, you understand why setting up some observation is not completely trivial! Fortunately, observing the moon for fun does not require that the turbulence has completely gone away - you can get decent views at lowish magnification all the same.

As I set my eyes on the moon, I immediately noticed a small star next to its dark limb: an occultation was about to start! A lunar occultation takes place due to the relative motion of the moon and earth, which causes the moon to show an apparent speed of half a degree per hour over the background stars. As the moon is itself half a degree across, this is a small but noticeable motion. But the moon is a very bright object compared to all but the few brightest background stars, so it is a rare occurrence that you get to see any star in the field of view of the moon, at high magnification: your eye cannot simultaneously watch the moon's surface and see the faint stars around it.

When a star is bright enough to be seen together with the moon, however, it is a really nice sight. And when the moon slowly slides over it, the show is remarkable: as the apparent angular speed of the moon is of 0.5 arcseconds per second, while stars have apparent diameters of at least ten times less than that, their light takes a fraction of a second to disappear: it's an almost instantaneous turning off. So much so, in fact, that in the past an accurate timing of these lunar occultations was used to determine details of lunar topography. Lunar occultations have also in some cases allowed to discover that the occulted star was in fact a member of a close binary system.

Yesterday, the star in question was SAO164697, a magnitude-6 star located 211 light years away from us in the direction of Capricornus. At magnitude 6.3 that star is at the limit of visibility for the unaided eye, but with the 2000x higher light collection of a 16" Dobson, however, it appears as bright as Mars. It was quite a show indeed to follow it as it slowly got nearer and nearer to the dark silhouette of the moon (which can barely be made up when the moon is at the first quarter), and then disappear all of a sudden.

I would have loved to take a video of the event, but a Dobson telescope is a purely visual instrument. As such, it is highly impractical to take pictures or footage with it. I still made a clumsy attempt at capturing the scene, seconds before the occultation, by putting the objective of my cellphone in front of the eyepiece. I feared I would miss the occultation by fiddling with the cellphone so I only took one rushed picture, and  I was later surprised to see that I had managed to capture something! You can see the result below (the star is on the lower right side of the picture).

Later, with some more time, I managed to take a few slightly better pictures of the moon surface. I attach one below. The mirror's temperature had not settled yet fully, but the turbulence is a random phenomenon and sometimes you get spells of good seeing even with an imperfect setup. 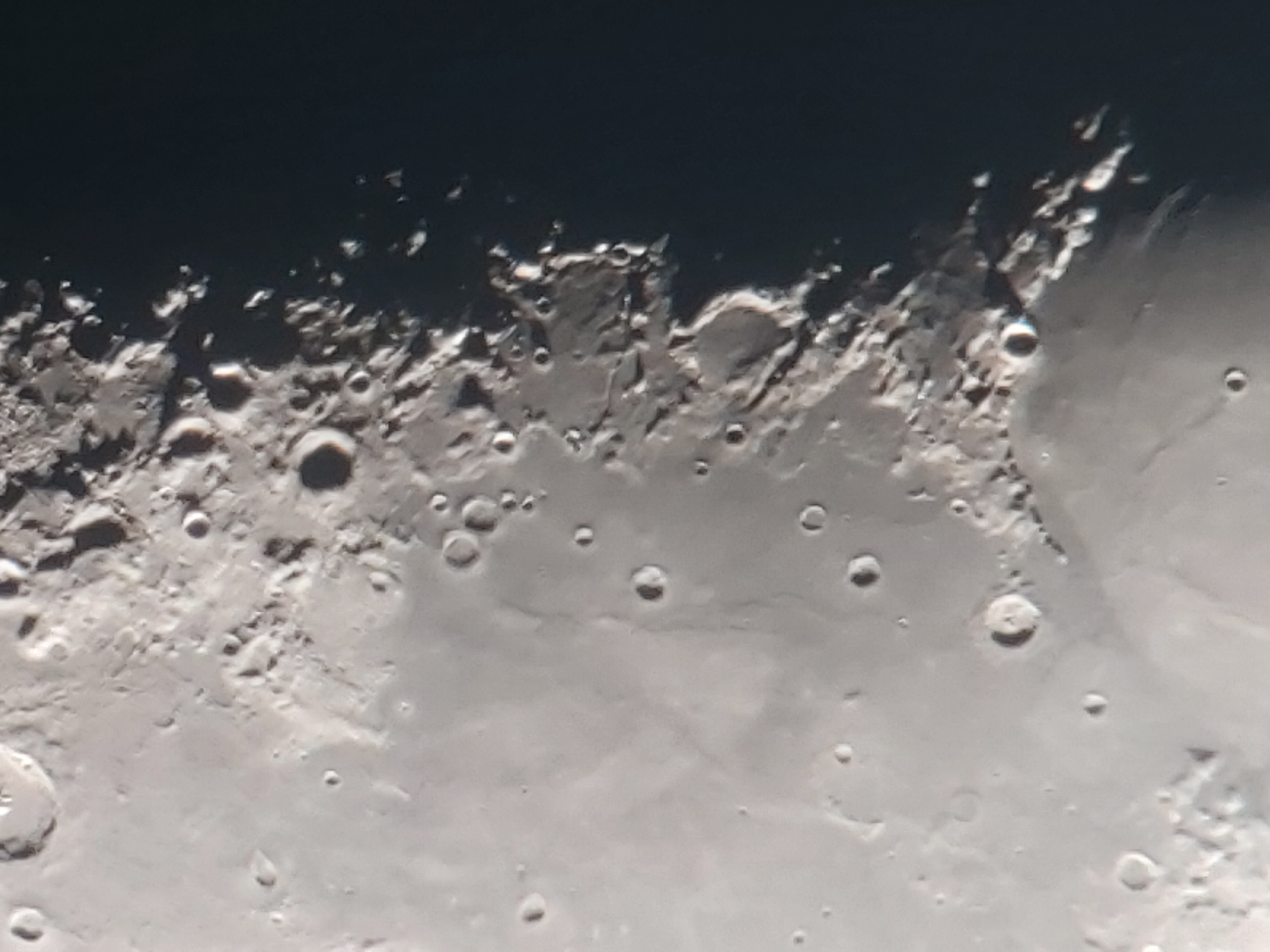 Finally, I wish to explain why serendipitous observations of lunar occultations, such as the one I was treated to yesterday, belong to a class of events I called "feeling-lucky-boosting" ones.

Lunar occultations are only nice to see when the star is observed to disappear behind the dark limb of the moon. When a star disappears behind the illuminated side of the moon, the show is not nearly as fun, and is much harder to observe due to the glare from the moon's surface. This works in our favor, as occultations at the dark limb are all we get with a waxing moon (the moon moves in the direction of its dark limb!), and vice-versa for a waning moon. And nine times out of ten, when we watch the moon it is waxing (we observe much more often in the first half of the night, and if there's a moon in the sky then, it's waxing!)

Because of this asymmetry we are likely, as we observe the waxing moon, to notice a star about to be occulted from the dark limb. This allows us to follow the event "for free", as if we stumbled on a winning lottery ticket. If instead, as we set our eye on the eyepiece, a star had just been covered by the moon, we would not notice it.... For an amateur astronomer, therefore, the serendipitous observation of a lunar occultation gives a feeling of being lucky, which is not counterbalanced by a similar rate of adverse occasions. Few similar "asymmetric" instances of this kind can be compared to it: one is, e.g., when you find a dollar bill on the ground. You only register these positive occurrences, because you are unaware of the cases when the dollar bill was picked up by somebody who passed by a minute ago.