Tommaso Dorigo
I do not keep crocodiles[*] in my drawer, so this short piece will have to do today.... Stephen Hawking, the world-renowned British cosmologist, passed away yesterday, and with him we lost not only a bright thinker and all-round scientist, but also a person who inspired two or three generations of students and researchers, thanks of his will to live and take part in active research in spite of the difficulties he had to face, which he always managed to take with irony. Confined on a wheelchair by ALS, and incapable of even speaking without electronic assistance, he always displayed uncommon sharpness and wit.
I very much like to remember him by pasting below a picture taken during a free-fall flight - a tale-telling proof that he wouldn't resign to his life challenges. Notice the Newtonian apple above him. 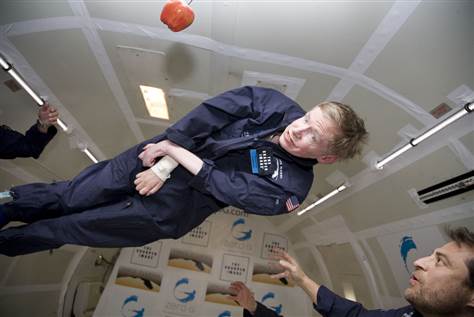 The contributions of Hawking to our understanding of the universe are very significant. The most well-known among those was on the thermodynamics of black holes, with his prediction that black holes can radiate electromagnetic radiation and even evaporate due to the resulting energy loss; but his research encompassed much more, from his early work of 1970, when he demonstrated that assuming general relativity and the cosmology theory of Friedmann the universe must have originated in a singularity, to later very significant contributions to research in quantum gravity.

Hawking also wrote several science popularization books, participated in shows, and was quite active in science outreach. He held very pessimistic views on humankind, which can be summarized in his prediction of our (early) extinction. I hope he was wrong on that one, or if you will I hope I will never know.

[*] In journalistic jargon, a crocodile is an obituary written before the passing away of the subject.