Tommaso Dorigo
Particle physicists call "jet" the combined effect of many particles produced together when an energetic quark or gluon is kicked out of the hadron it called home, or when it is produced out of the blue by the decay of a massive particle.
The clearest example of the first process are the collisions we routinely produce at the Large Hadron Collider, where pairs of protons traveling at close to the speed of light bang into each other head-on. Protons are like bags of garbage: they contain a complex mix of quarks and gluons. So what happens in the collision is that one individual quark or gluon inside one proton hits a corresponding constituent in the other proton; the two pointlike objects scatter off each other, and get ejected out of the proton containing them.

Now, quarks and gluons possess a "strong colour charge" that makes them feel the strong interaction. The peculiarity of the strong interaction (QCD) is that it grows with the distance between two charges: this in practice forces these objects to live bound inside colour-neutral hadrons. When you kick one of them out of the neutral system, QCD will get busy to avoid any coloured body to remain by itself. So the ejection involves the successive recombination of the original particle with others that "pop up" from the vacuum to neutralize its colour charge; these quarks and gluons are generated in the process at the expense of the initial kinetic energy of the ejected body. At the end of the day, one is left with a stream of almost collinear particles, which can be identified and measured with the detectors constructed around the collision point: a jet.

Much the same thing happens when a heavy particle, like a Higgs boson or a W boson, chooses to decay into a quark-antiquark pair (the Higgs can also decay to gluon pairs, but we will not consider those here). The two quarks are shot in opposite directions, in the reference frame where the decayed particle is at rest. Unable to combine into a colourless body, each original quark produces a jet of hadrons by itself. So in this case you end up with two independent jets as the product of the heavy particle decay.

Indeed, ATLAS and CMS have in the recent past proven that they can detect Higgs boson decays into pairs of bottom quarks. The H-->bb decay process is the most frequent (six out of ten H bosons decays that way), but it is real hard to distinguish from a huge background of random pairs of jets produced by more mundane processes in the LHC collisions. So finding a signal of H-->bb decays by measuring pairs of jets that contain b-quarks has been a complicated, but eventually successful task.

After 2012, the LHC experiments have been able to study the Higgs boson in quite some detail, but a lot remains mysterious about this particle: clearly, we have a lot of work ahead of us, especially since the LHC will continue to run, and produce more and more Higgs particles, in the forthcoming two decades. The larger data available for analysis means that we can exploit less frequent decay modes or signal topologies for the task.

One thing that we are going to do with conviction is to search for Higgs boson decays into b-jet pairs in events which resulted in the Higgs to be produced with a very large momentum. This is a rare occurrence, indeed, but it is also a proficuous one to seek. It turns out, in fact, that the background from regular QCD jets can be tamed more effectively in this "high boost" regime.

In particular, ATLAS and CMS have become very good at distinguishing Higgs boson decays to jet pairs which end up producing a single, fat jet. The two jets from H decay "merge" into a single stream if the Higgs is produced with large momentum. Surprisingly, instead of making things murkier, the fact that we are looking at a single fat jet helps the discrimination of backgrounds.

A new article by the ATLAS collaboration shows how to well reconstruct the mass of the Higgs boson from the decay products it produces, when it decays to a single energetic jet wherein two b-quarks produce localized subclusters of tightly-packed hadrons. The plot of the week this time is therefore a graph from that article, showing how well they can "see" the Higgs mass bump. This is a simulation, of course, but it faithfully reproduces our understanding of the underlying physics. The fact that this "bump" is narrow (the numbers in the picture evidence how a large fraction of it sits in a constrained mass window) bodes well for future searches, when QCD-induced backgrounds will compete to produce similar jets. 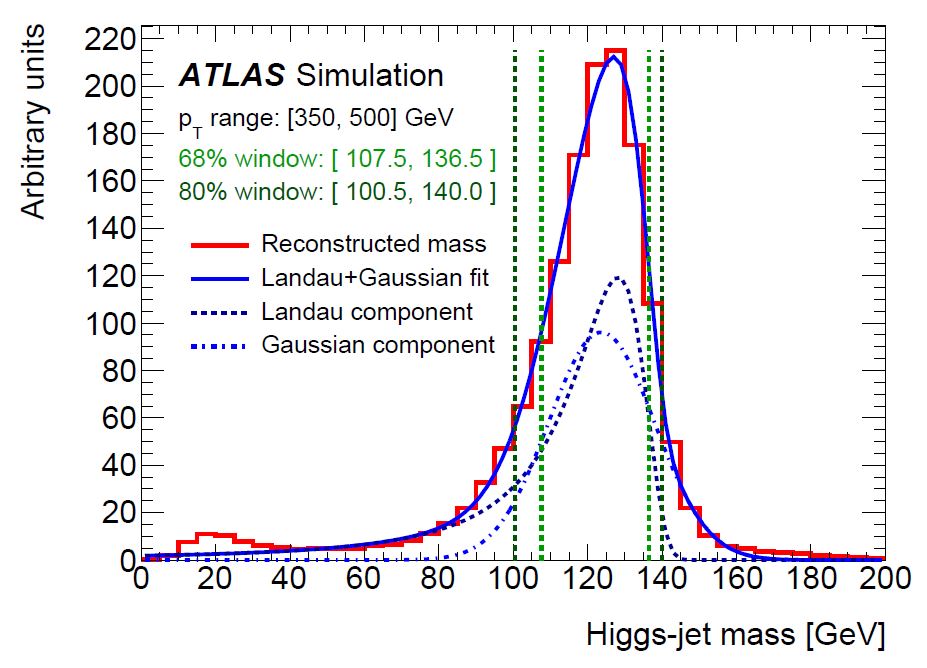 Above, the jets used for this graph all have a transverse momentum, pT, in a restricted range, so that one can assess the resolution achievable for the Higgs mass as a function of that variable. The red histogram shows how the simulated data distributes in the reconstructed mass; the blue curves show that the distribution can be parametrized by a simple shape, which combines a Gaussian and a Landau distribution. A small fraction of "die-hard" Higgs bosons that cannot be well reconstructed is also visible at the low end of the spectrum.

You can get to read detailed information about the ATLAS reconstruction technique in their original preprint article.