Tommaso Dorigo
I am presently spending a few days in the pleasant island of Crete, in the middle of the Mediterranean, where I am attending the eight edition of the "International Conference on New Frontiers in Physics". Crete is a gorgeous island at the crossroads of three continents, and because of its location it is brimming with relics of ancient to less ancient history. Anyway, this post is rather about physics, so let me go back there.

I have participated in several of the previous editions of the ICNFP conference, organizing parallel sessions and attending as a chair of sessions, as well as serving as judge of the posters presented at the conference. But this year was different. First off, I participated as an invited speaker to a memorial session on Murray Gell-Mann, the recently deceased theoretical physicist who received a Nobel prize for the idea of quarks as constituents of hadrons. But in addition, this year I have been invited also to accompany my wife, the soprano Kalliopi Petrou, in a concert for piano and voice which included beautiful songs by Ravel, Poulanc, Weill, Theodorakis, as well as solo pieces by Schumann. In due time I will post some excerpts of the concert here. But this post is rather about physics, so let me go back there...

One of the nice things about the ICNFP is that it is held in the west of the island, at the Orthodox Academy of Crete in Kolymbari. The place is at half-hour driving distance from the beach of Falassarna, one of the most beautiful stretches of sand of the Mediterranean. We visited it yesterday, which was the excursion day of the conference. Below you can see a picture of the place, but really, you have to come and see for yourself. But this post is rather about physics, really, so let me go back there!

In this post I will take the opportunity, by pasting graphs shown during talks at the conference (I am too lazy to dig them out of the public physics pages of the collaborations) to show you how large are the samples of Higgs boson decays that the CMS and ATLAS experiments have rounded up, exploiting the over 150 inverse femtobarns of proton-proton collisions delivered by the LHC to each detector during the 2016-2018 run. For those of you unfamiliar with inverse femtobarns, they amount to roughly ten million billion collisions.

How many Higgs bosons were produced inside CMS and ATLAS by that huge number of slaughtered proton pairs? Well, it is easy to compute the number. The cross section of Higgs production is of about 60 picobarns, and a picobarn is 1000 femtobarns. So you need to multiply 150 by 60,000, and take a factor of two for the two experiments: this makes the number of produced Higgs particles equal to 18 millions! The LHC is, indeed, a Higgs boson factory!

Now, not all of those 18 million Higgs bosons have been spotted by the detectors, of course. First of all, many of them decayed in ways that were not clean enough to warrant an effective selection. The experiments have, in truth, isolated samples of decays to b-quark pairs, W boson pairs, and tau lepton pairs - the three "second-best" decay modes in terms of purity with respect to background contaminations and clarity of the resulting signal. But here we only gaze at the two most convincing decay modes, the ones that guarantee the reconstruction of a narrow mass peak atop well-behaved backgrounds. The H-->ZZ--> four lepton decay mode is the cleanest, but the Higgs decay to photon pairs yields larger number of events. Let us see the graphs. 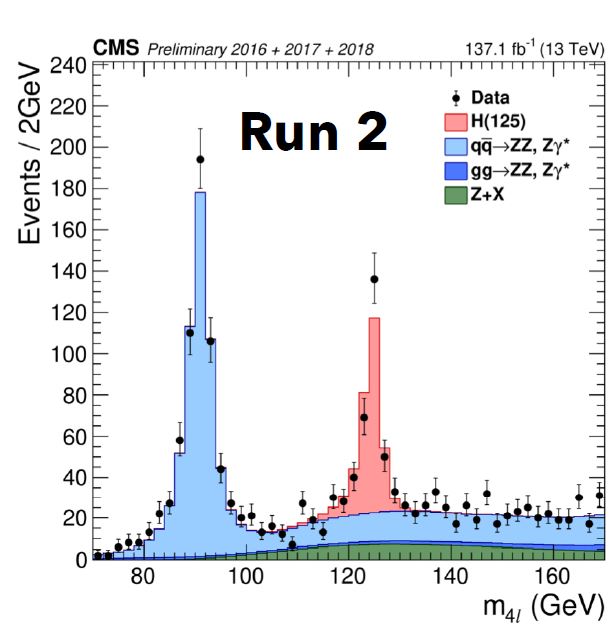 For the H-->ZZ decay mode please see the recently produced mass distribution of CMS shown above. In the picture you see the towering peak at 125 GeV due to fully reconstructed Higgs boson decays, sitting on the right of the equal-sized peak on the left, which is due to four-lepton events coming from a single Z boson decay. The data are displayed as black points, while backgrounds are in blue and green, and the Higgs boson signal that best matches the observed data is in red.

The Higgs signal above is quite a far cry from the first "discovery" plots of 2012, admittedly - of course, the data is an order of magnitude more, and the higher center-of-mass energy of the 2016-18 collisions (13 TeV versus the 7-8 TeV of the data used for the discovery) also increases the bang for the buck of Higgs particles. There are now dozens of events from this precious decay mode, which allow us to measure with precision a number of properties of the Higgs boson in addition to the mass and cross section.

For the H-->γγ decay mode see instead the ATLAS graph below, which also uses the full Run 2 statistics. Again, data are shown by the black points with vertical uncertainty bars (invisible in the top graph, better seen in the one at the bottom). The signal may look faint in the original mass distribution, where it sits on top of a large background from QCD-induced photon pairs and other backgrounds. Once the background model is subtracted (lower graph), however, you see that we are talking of thousands of Higgs bosons in one single picture! Again, these events also allow delicate measurements of production properties of the (by now not-so-) elusive particle. 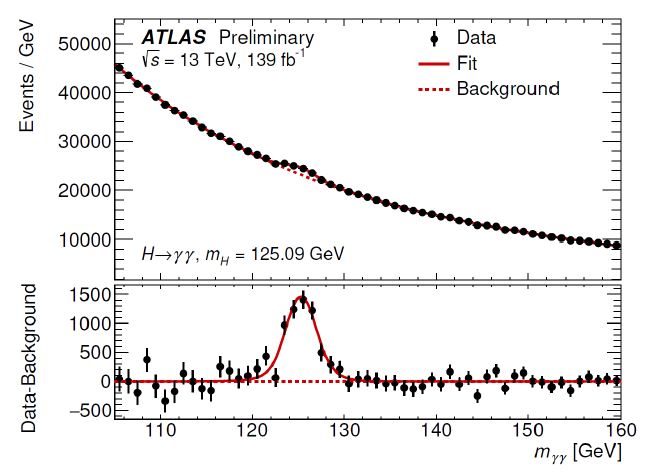 While the LHC will keep accumulating collisions for the next decade and more, in the program called "HL-LHC" (HL standing for High Luminosity), new particle colliders are being designed which can study the Higgs boson in far greater detail, as well as extend our sensitivity to rare and new phenomena. With their proposal, of course a debate over whether the required money is well invested or not has burst. For these machines are large, and of course, costly.

In the talk I gave at the Gell-Mann memorial session today, titled "From SU(3) to Three Quark Families: Completing The Picture Of Matter Constituents", I was able to show clear instances of theoretical intuitions that helped us complete the picture of Standard Model particles. And I made the point that all of those ideas had at their roots an experimental observation.

In other words, the false paradigm that theoretical ideas are drivers of experimental investigation can be exposed in its fallacy quite strikingly in the history of the discovery of quarks. For e.g., the idea that there be three quark families, put forth in 1971 by Japanese theorists Kobayashi and Maskawa, could not have been conceived if an experiment in 1964 had not measured a tiny but non-zero amount of violation of the CP symmetry of Nature by weak interactions. Similarly, the prediction of the existence of a fourth quark by Glashow, Iliopoulos and Maiani of 1970, and a ballpark estimate of its mass, could only come from the experimental measurement of an exceedingly small rate of decays of neutral kaons into muon pairs. Finally, the very intuition of a group symmetry behind the structure of hadrons, which paved the way to the quark hypothesis by Gell-Mann and the Aces hypothesis by Zweig (the two are essentially the same thing), has at its roots a painstaking classification effort by hundreds of measurements performed in the forties and fifties at the first particle accelerators.

Note that none of the experimental endeavours mentioned above had a clear, compelling theoretical prediction at their basis: the progress of particle physics in the past century, which led us from the discovery of the electron to the completion of the picture of matter constituents, is experiment driven. We measured things because we could: so not theory, but technology is the real driver of advancement in our knowledge.

For this reason, it is a colossal blunder, in my opinion, to declare that we have no motivation for building new experiments and accelerators since there is no theoretical hint that we would discover something new there. We simply have no choice. As Dante Alighieri wrote in his famous poem "La Divina Commedia" no less than 700 years ago, "Fatti non foste a viver come bruti, ma per seguir virtute e canoscenza" - you were not born to live like beasts, but to follow virtue and knowledge. It is not the first time I quote that sentence in this blog, and I think it will not be the last time.

We need to keep reminding ourselves, as well as the Sabine Hossenfelders out there, that we are not proposing new machines because naturalness predicts new physics at the TeV scale. We are proposing new machines because if we didn't build them we would be going against our innate desire, and I would add cathegorical imperative, to further our knowledge.