Tommaso Dorigo
The most recent preprint in the ArXiv this evening is an APPEC report on the neutrinoless double beta decay. This is the thick result of a survey of the state of the art in the search for a very (very) rare subnuclear process, which can shed light on the nature of the mass hierarchy of neutrinos. Oh, and, APPEC stands for "AstroParticle Physics European Consortium", in case you wondered.
I do not wish to, nor would I be able to, summarize in a blog post the hefty work of the committee members here. My ambition is to only give here a few hints of their recommendations, easily accessible in the first chapter of the report; but before I get there, maybe I have a chance to explain what it is that this fascinating research topic is about.

Beta decay is the process whereby a neutron transmutes into a proton, a thing that occurs spontaneously to free neutrons in about 900 seconds. When they go beta, neutrons emit an electron and an electron anti-neutrino: of course, the generation of the positive electric charge of the proton must be counter-balanced by the emission of a negative corpuscle: electric charge is conserved locally in the Universe. The neutrino, though, is there to balance out two additional important inequalities, if you look at a neutron on one side and a proton plus an electron on the other.

Having a third fermion, a neutrino, on the right allows angular momentum to be conserved, if two of the three decay products have spins anti-aligned, subtracting them off one another:

But then, the neutrino also has the purpose to balance out another kind of charge: the "lepton number" of the electron. If you start from a non-leptonic initial state, you can only create leptons in pairs, one having a positive unit of lepton number and the other a negative unit.

Curiously, while beta decay was indeed the process that suggested the existence of the neutrino (it was Wolfgang Pauli who first hypothesized its existence, in 1930), back then the neutron had not been discovered yet (it would take two more years, as it was first proven to exist by Chadwick in 1932). That's because beta decay involves also heavy radioactive nuclei, where a neutron well hidden within the atomic core turns into a proton.

All physicists could see back then was that radioactive elements emitted energetic electrons, and in so doing those substances changed their atomic number by one unit. The reason to invoke the presence of an invisible "neutron" escaping undetected (that was how the neutrino was first named, but the name later stuck with the heavy initiator of the decay) was the apparent non-conservation of energy in the process.

Beta decay was studied intensely in the thirties and forties of the twentieth century, and we got to learn a whole lot about weak interactions. First Enrico Fermi was able to develop a theory and compute decay rates from first principles; then he used the process in building the first atomic pile, at the University of Chicago in 1940. Much later, by exploiting very energetic proton-antiproton collisons we were able to produce the particle that does the trick: the W boson, discovered by Carlo Rubbia's UA1 experiment at CERN in 1983, is indeed the mediator of the charged-current weak interaction.

We thus nowaday describe beta decay as the process where a down-type quark (of which there are two in the neutron, as the neutron has a "udd" quark composition) turns into an up-type quark (thus making the neutron become a proton, "uud") by emitting a negatively charged W particle. The W then disintegrates immediately, yielding the electron and the electron antineutrino.

So all is explained, all is measured, and all is well... But if you think about the process, you come to realize that if you have two neutrons in a densely packed nucleus, it could be conceivable that they would both decay at the same time. The W bosons would then have a chance to emit two electrons, while bouncing off one another the electron antineutrino. The result of this magical trick would be that two neutrons would turn into two protons, by emitting two electrons, and... No neutrinos would come out!!!!

In reality, the process violates lepton number by not just one, but two full units, as we start from a initial state with zero leptons, and we end up with two electrond flying out. This could, however, be seen if neutrinos are Majorana particles - so that they are their own antiparticle. What is more, the measurement of the very low rate of this process would shed light on the mass ordering of light neutrinos: we would get to know if the hierarchy of neutrinos is "normal" or "inverted", as seen in the graph below. 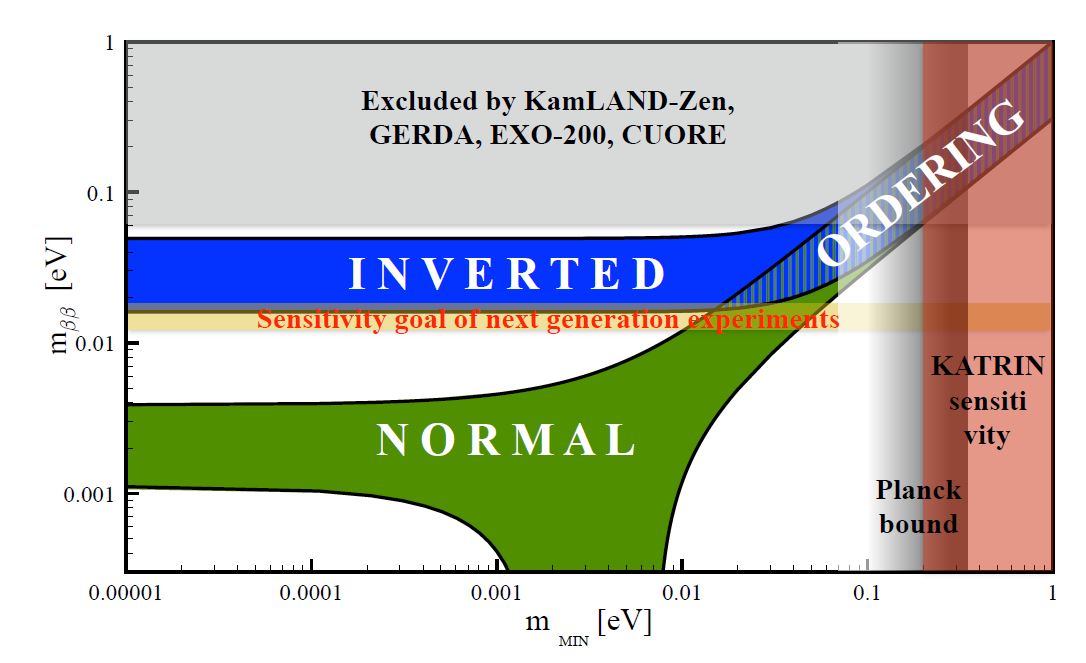 While the grey area on top has been sought for, and excluded by direct searches, experiments will need to reach a sensitivity in the range of 0.01 eV in the effective mass parameter m(ββ) (yellow line) to be able to prove that the mass hierarchy of light neutrinos is normal. That is something that should become possible in the next few years.

I think the topic is a bit too complex to discuss in this post, so I will stop here, recommending you to give a look at the linked preprint, which contains a very broad survey of this field of investigation, brimming with ideas on the exploitation of radionuclides in cunning ways, all meant to increase the sensitivity of the detectors and reducing backgrounds. As for the recommendations of the survey, it is unsurprising to see that they are all for pursuing with more intensity this quest.

Quoting from the first section, and skipping even recommendations to make the reading more interesting:

Recommendation 1. The search for neutrinoless double beta decay is a top priority in particle and astroparticle physics.

Recommendation 3. A multi-isotope program at the highest level of sensitivity should be supported in Europe in order to mitigate the risks and to extend the physics reach of a possible discovery.

Recommendation 5. The European underground laboratories should provide the required space and infrastructures for next generation double beta decay experiments and coordinate efforts in screening and prototyping.