Tommaso Dorigo
Particle Physics deals with the study of the elementary constituents of matter, and the interactions that they withstand. When non-insiders hear of elementary particles and the experiments that study them, probably their mind goes to experiments at the Large Hadron Collider, CERN's giant accelerator of protons and heavy ions that produced the collisions used by the ATLAS and CMS experiments in 2012 to discover the Higgs boson. The association with LHC and the Higgs particle is very likely because that discovery took the media by storm when it was announced, and rightly so.

Regardless of the importance of studying the smallest distance scales by creating collisions at the highest possible energies, which requires using the largest accelerator at disposal, particle physics is not just that. There are a large number of "smaller" or just different experiments around the world, and they concentrate on things that the LHC is not designed to study.

Here I cannot of course launch in a description of the many facilities around the world and the wealth of different experiments that study subnuclear particles and their interactions; however, I think it is important to also discuss these "minor" players, where the diminutive only describes the smaller size of experimental apparata and collaborations, and does not refer to the relative interest for the advancement of science.

Indeed, while we are hoping to see new physics at the LHC, and many believe that it is there, indeed, that the Standard Model of particle physics will start to break down, we might get surprised - as those "minor" experiments are also patiently testing our understanding of fundamental physics and they might be the first to show that there are things out there that the Standard Model does not describe.

So take the NA62 experiment at CERN. NA stands for "North Area", and the acronym is meant as an inventory number - that alone tells you how many different experiments there are going on! - but NA62, although a "small" experiment, is not without interest. NA62 studies kaons, which are the lowest-mass particles containing strangeness. They are composed of a quark-antiquark pair. The three lowest-energy kaons, which have a comparatively long lifetime, are the K+, the K-, and the K0. The K+ is made up by an up-quark and an anti-strange quark; the K- is constituted by the opposite combination, an anti-up and a strange quark; and the neutral kaon, K0, is made up by a down-antistrange or strange-antidown quark combination.

The interest of kaons and their phenomenology is a long-standing one, dating back to the fifties of the 20th century, when these particles exhibited puzzling behavior when they were discovered and studied in fixed-target collisions at the first accelerators. They were called "strange" because they could be produced in huge numbers when colliding protons with nuclear targets - an indication that a strong interaction was responsible of their creation - but then they took forever to decay (in a subnuclear sense!), which indicated that the interaction responsible for their disintegration was very weak.

A decade later, when the first classification of hadrons was in the making by the hands of Gell-Mann and Zweig, who understood that the different hadrons discovered in those experiments could be cataloged by their electric charge, spin and other properties, showing that they could be described as composite states of smaller particles (called quarks by Gell-Mann), kaons were instrumental in proving that a very weird asymmetry existed in Nature: the decay of kaons did not respect the symmetry called "CP", as proven in a landmark experiment by Christenson, Cronin, Fitch and Turlay in 1964.

The physics of kaons never really ceased to enthuse experimentalists and theorists. Indeed, NA62 is only one of the experiments actively studying these particles. NA62 concentrates on exceedingly rare decays of the kaons, that take place through very weak, second-order interactions. The main effort of the experiment has been the one of observing and measuring the rate of the decay of charged kaons to a pion and a neutrino-antineutrino pair, a process which the standard model predicts to take place only once per 10 billion decays. To see it, you thus need to observe gazillions of decays! This can only be done at a "kaon factory", and indeed, the experiment consists in a decay vessel fed by a large number of kaons produced in nuclear interactions of a hadron beam.

Recently, NA62 produced the first evidence of the decay process they are searching for. Being a very rare process, it is paramount to be able to distinguish it exceedingly well from any possible background capable of mimicking its signature. NA62 does this by studying all background processes in detail, sizing them up and then scanning the plane constructed with two kinematic variables that one may measure from the visible properties of the only charged particles detected in candidate events: the incoming kaon, and the charged pion emerging from the decay.

You can see the plot below, which has on the x axis the pion momentum, and on the y axis the squared "missing mass", which is a quantity resulting from the incoming kaon momentum and the outgoing pion momentum, once it is assumed that the outgoing particle is indeed a pion (it can be a muon, and this produces features in the distribution below).

As you can see, the decay of a kaon into pion-neutrino-antineutrino would populate regions of this plane which are kinematically inaccessible by the other processes that yield one single visible charged particle. On the bottom you can see the results of mismatching a muon for a pion, when the muon is coming from the very frequent decay of the charged kaon into a muon-neutrino pair; on the center of the graph, you can see what happens when you consider the decay of the kaon to a positive-neutral pion pair; and on the top are decays of the kaon to three charged particles, which are easier to flag but due to their huge rate still may constitute a background. The red boxes are regions where the signal is expected to produce a predominant, if tiny, rate of events. 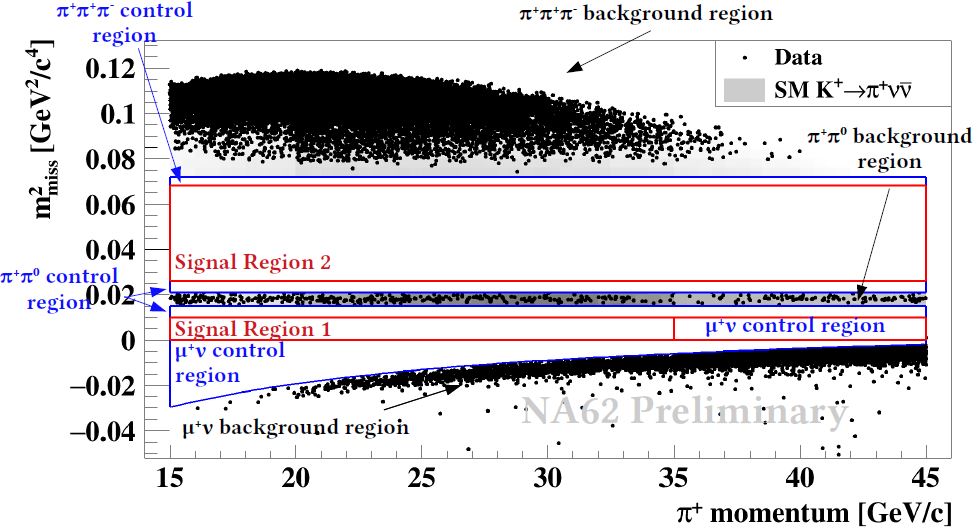 Of course, the signal regions are "blinded": analysts are not allowed to look in that region of the plane until every detail of the analysis has been fixed and backgrounds have been estimated. Then, once the box is opened, one may finally see if a signal has been caught. And indeed, here it is! 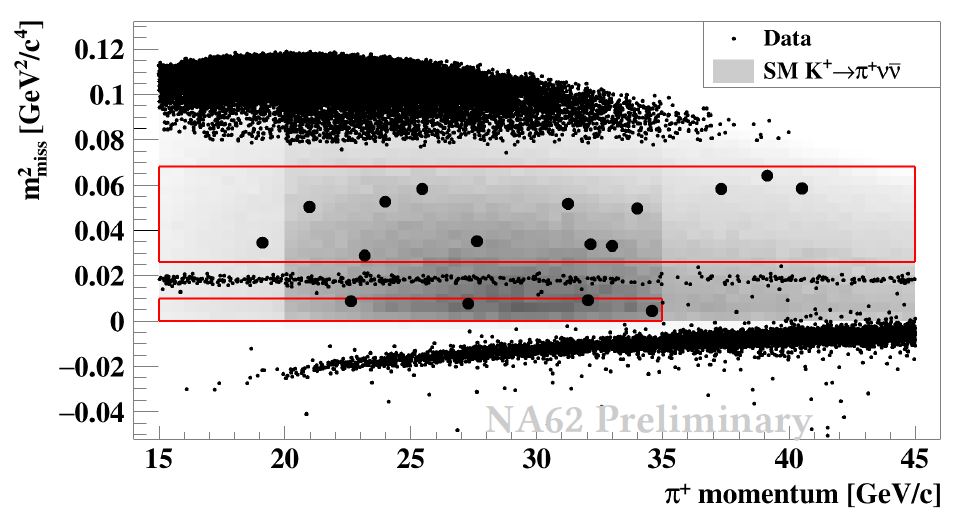 The signal region indeed contains 17 events, when only 5.3 are expected from backgrounds. The observation is quite compatible with the Standard Model expectation, which predicted that 7.6 signal events would be seen in addition to backgrounds, given the amount of data analyzed by NA62.

The result is impressive, but it is not the end of the story. NA62 needs to collect a larger signal by running for more years, such that they will be able to turn the branching ratio estimate into a measurement of a fundamental parameter of the Standard Model called the "Vtd" matrix element of the Cabibbo-Kobayashi-Maskawa mixing matrix. The reason why this inference is possible is that the rare decay takes place through one of the processes shown in the figure below.

As you see, you have a strange quark (the top left incoming line labeled "s" in the Feynman diagrams) that becomes a down quark (the line labeled "d" that exits from the bottom or the right) by force of a second-order weak interaction mediated by W and Z bosons; the processes also materialize the neutrino pair (labeled "v"). If you look closely, you will see that in all cases there is an internal line in these loop diagrams, which is contributed by the top quark. In practice, they take place also thanks to a top quark "becoming" a down quark through the emission of a W boson. That process contributes to the decay probability, so by measuring the latter one can infer the "matrix element" that describes the relative strength of that transmutation.

So, the work of NA62 is not over, but it is already time to congratulate them for this splendid new achievement! In fact, while the "statistical significance" of the observed excess of events is not yet at the level of 5-sigma (it is 3.5 sigma at present), which physicists usually require for a discovery to be proven, we can certainly waive the requirement in this case. The reason is that NA62 really sought for one signal, not hundreds. They optimized their analysis for the K->pi nu nu decay and found an excess that can be produced by a background fluctuation no more than once in several thousand trials. Since the 5-sigma criterion was designed to avoid the multiplication of spurious discoveries arising in multiple testing, while this is no multiple testing at all, I personally consider that the decay has been effectively discovered: 3 sigma are a very valid threshold in this case. Good job, NA62!

Tommaso Dorigo (see his personal web page here) is an experimental particle physicist who works for the INFN at the University of Padova, and collaborates with the CMS experiment at the CERN LHC. He coordinates the European network AMVA4NewPhysics as well as research in accelerator-based physics for INFN-Padova, and is an editor of the journals Reviews in Physics and Physics Open. In 2016 Dorigo published the book “Anomaly! Collider physics and the quest for new phenomena at Fermilab”. You can get a copy of the book on Amazon, or contact him to get a free pdf copy if you have limited financial means.