Tommaso Dorigo
Yesterday's seminar at CERN by Giuseppe Ruggiero unveiled the preliminary results of a search for the rare decay of charged kaon into a pion and a neutrino-antineutrino pair, performed by the CERN NA62 experiment. The result in truth had been already shown a couple of weeks before at the Moriond conference, so it's no news - or if you prefer, it's two nu's - as indeed (spoiler alert) one such event was observed, with two neutrinos inferred from it.

Observing decays of the kaon to pion plus neutrino pair is not an easy feat: if the Standard Model is correct (and we have no reason whatsoever to deny it) these are things that should occur at a rate of less than once in ten billions. It is four times more probable that you win six times in a row at the roulette by betting on a single number, than for a kaon to decay that way (or rather not, as chances are that after four or five wins in a row you would be dragged out by hulky personnel).

Measuring the rate of very rare processes is fun, but it is also informative. Some of us believe that it is in this business of rare decays that the Standard Model will first be refuted. For no matter how large the mass of extra-SM particles is -and consequently hard to produce them even in super-duper colliders- their presence can make itself felt in quantum loops involved in the decay of light particles like the kaon.

A quantum loop takes place when a particle "fluctuates" for an unmeasurably small instant into a virtual state made of more particles of any kind (provided that conservation rules are obeyed: the kaon charge cannot briefly disappear, for instance); the latter then recombine into the original particle or, as in loop-induced decays, into the decay's final state bodies.

It is the rarity of the SM decay to the considered final state what allows faint non-SM effects to become relatively significant. If the SM decay can only occur through quantum loops, like those shown in the figure below, the probability of the process is strongly reduced with respect to other more viable reactions. The existence of new particles could then produce a measurable effect as they, too, could circulate in those virtual loops.

The graphs above are not the full story in the decay of the K+ to pion and neutrino pair: they only show how the anti-strange quark in the K+ can turn into an anti-down quark. In the Standard Model, quarks of one species can only turn into quarks of another species if there is a change of one unit in the electric charge: e.g., a down quark (charge -1/3) can become an up quark (charge +2/3), or a top quark (charge +2/3) can become a bottom quark (charge -1/3). The mediator is always a W boson, which carries away the extra unit of charge. If you want a strange quark to become a down quark (such that the positive Kaon can turn into a positive pion) you need the intervention of _two_ W bosons. The graphs above are the simplest way (i.e., the least expensive one in terms of probability of occurrence) that this can happen: notice how the s becomes a d only through first being turned into a "up-type" quark (u,c,t all have charge +2/3).

The decay sought after (see figure) is one where the kaon (red arrow entering from the left) emits a single charged particle, the pion. This recoils against the neutrino-antineutrino pair (green arrows), which is unobservable. In order to be sure that the decay did not involve other particles (in particular, that there are no muons, other pions, or photons emitted at the decay point) a number of kinematic requirements and a redundant set of measurements are made by several sub-detectors.


The analysis and the selection of the events compatible with the decay is complex, and I don't think it is useful to discuss it here. Of course, when you are looking for a "one in ten billions" effect you have to use multiple selection tools and strict requirements to kill all backgrounds.

In the end, the "money plot" is one where two kinematic regions which should exclusively be populated with the rare decay signal are singled out. The graph is described by the measured pion momentum on the horizontal axis, and by the squared "missing mass" measured with a redundant set of methods. The missing mass is defined as the mass of a particle which, emitted opposite to the pion, would balance the energy-momentum conservation equations in the kaon decay. In the graph below, which is populated with all sorts of kaon decays to show their behavior in the graph, you can see that the decays K+ -> pi+ pi0 produce a horizontal band in coincidence with the squared mass of the neutral pion. 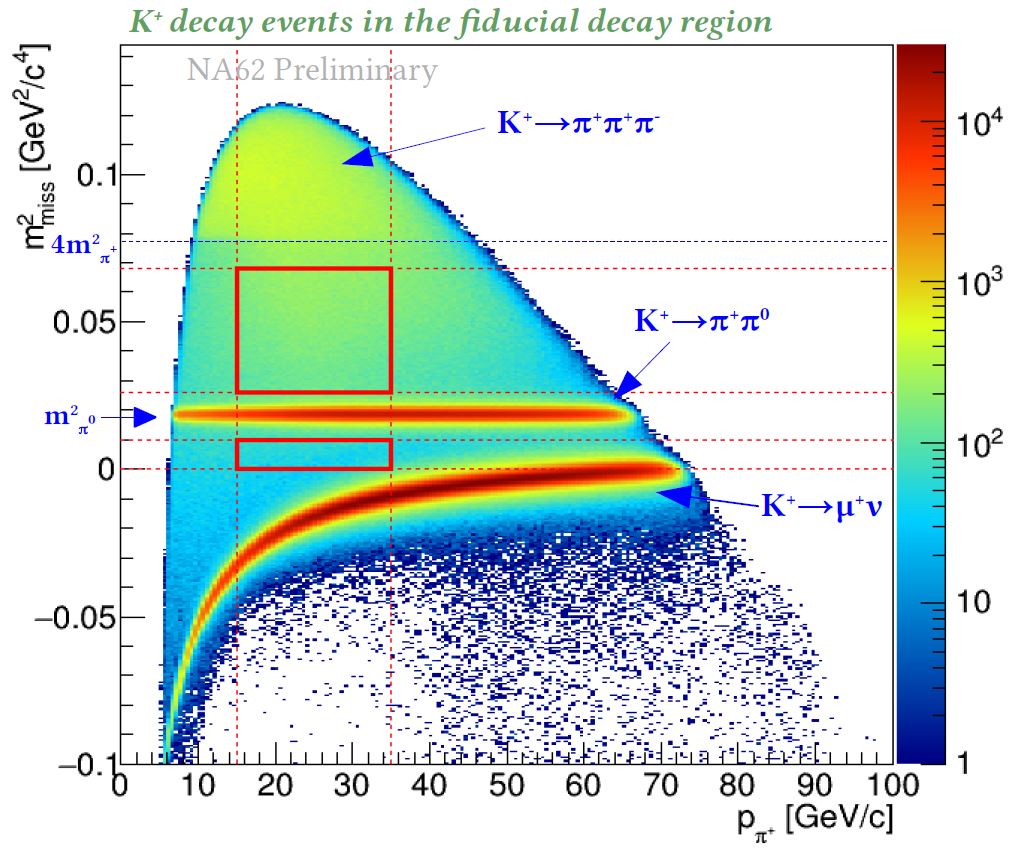 Above, the "temperature" of the areas of the graph reflect the probability to observe an event with the corresponding pion momentum and missing mass. The two red boxes indicate regions of the plane where a signal of the rare decay can be sought in events where no other particle signal is present besides the positively-charged pion (while in this graph all events contain other particles, or the pion is tagged as a muon).

The real data used for the measurement was of course blinded through all analysis steps, until the last moment. When one finally defines all procedures, selects the data and "opens the box", the surprise can be high. NA62 expected to see an average 0.15+-0.09 events from background sources, and 0.27+-0.04 from real SM decays of the K+. Here is what they saw: 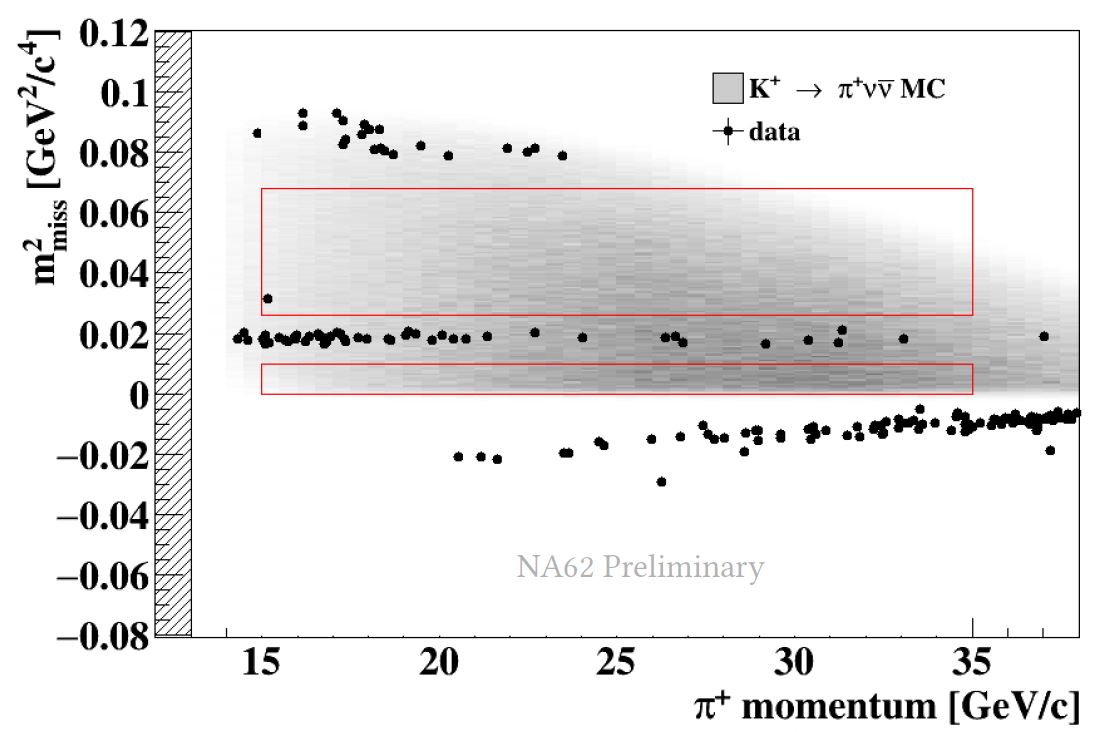 Aaand... One event is visible in the upper red rectangle, right at its lower-left boundary, but not incompatible with being a genuine signal event (although it sits in a region where the signal, shown by a grey cloud, is also not very dense). From the observation and the expected backgrounds, the collaboration extracts an upper limit on the K+ branching fraction at 14x10^-10, at 95% confidence level. This number can be used to constrain new physics theories that include particles liable to modify the rate of these rare decays. But NA62 is already looking forward to a x20 increase in statistics, which should be more than enough to precisely measure the branching fraction. And we are looking forward to that, too.