When Ignorance Kills Human Progress, And A Petition You Should Sign
By Tommaso Dorigo | December 1st 2017 03:43 AM | Print | E-mail

Tommaso Dorigo
An experiment designed to study neutrinos at the Gran Sasso Laboratories in Italy is under attack by populistic media. Why should you care? Because it's a glaring example of the challenges we face in the XXI century in our attempt to foster the progress of the human race.
What is a neutrino? Nothing - it's a particle as close to nothing as you can imagine. Almost massless, almost perfectly non-interacting, and yet incredibly mysterious and the key to the solution of many riddles in fundamental physics and cosmology. But it's really nothing you should worry about, or care about, if you want to lead your life oblivious of the intricacies of subnuclear physics. Which is fine of course - unless you try to use your ignorance to stop progress.

As a physicist, I am all in favour of your not being bothered with this kind of information. In fact, you really don't need it, if you are a pianist or a lawyer or a clerk. Yet we _must_, as a collectivity, further our understanding of the world, to win the challenges in front of us - global warming, food supply, diseases, overpopulation, life quality, space travel. I am not saying that neutrinos will pull anything off to help us fight those battles; but neutrino physics is part of a multi-pronged program that will most certainly help us.

I forgot one thing when I listed awesome challenges we face: human stupidity. That is a wondrous threat to our own survival. Stupidity is the engine of an attempt to kill the SOX experiment, which has chances to succeed. We must react, but first we must not be stupid ourselves - we need to look into the matter to understand where reason really is.

So take the SOX experiment at the Gran Sasso Labs. SOX is designed to study short-distance neutrino oscillations, targeting a long-standing anomaly in the observed properties of these subatomic particles, and finally allowing us to understand if there exists a fourth type of neutrino, called "sterile" as it does not interact with ordinary matter. In order to study the fine structure of the neutrino oscillations - the changing from one species to the other as the neutrino propagates - you need an intense source of neutrinos very close to a background-free, sensitive detector of large mass. The concept is the following: you emit neutrinos, allow them to propagate for only a very short distance, and detect their interactions with the matter in your detector, extracting information on their rate of oscillation as a function of the traveled distance.

At the Gran Sasso labs we have a very low background from cosmic rays, which otherwise spoil the sensitivity of similar experiments, as the lab is built under 2km of rock - the Gran Sasso mountain. There, a number of experiments study neutrinos, search for dark matter, and perform other physics measurements that would be impossible at ground level. 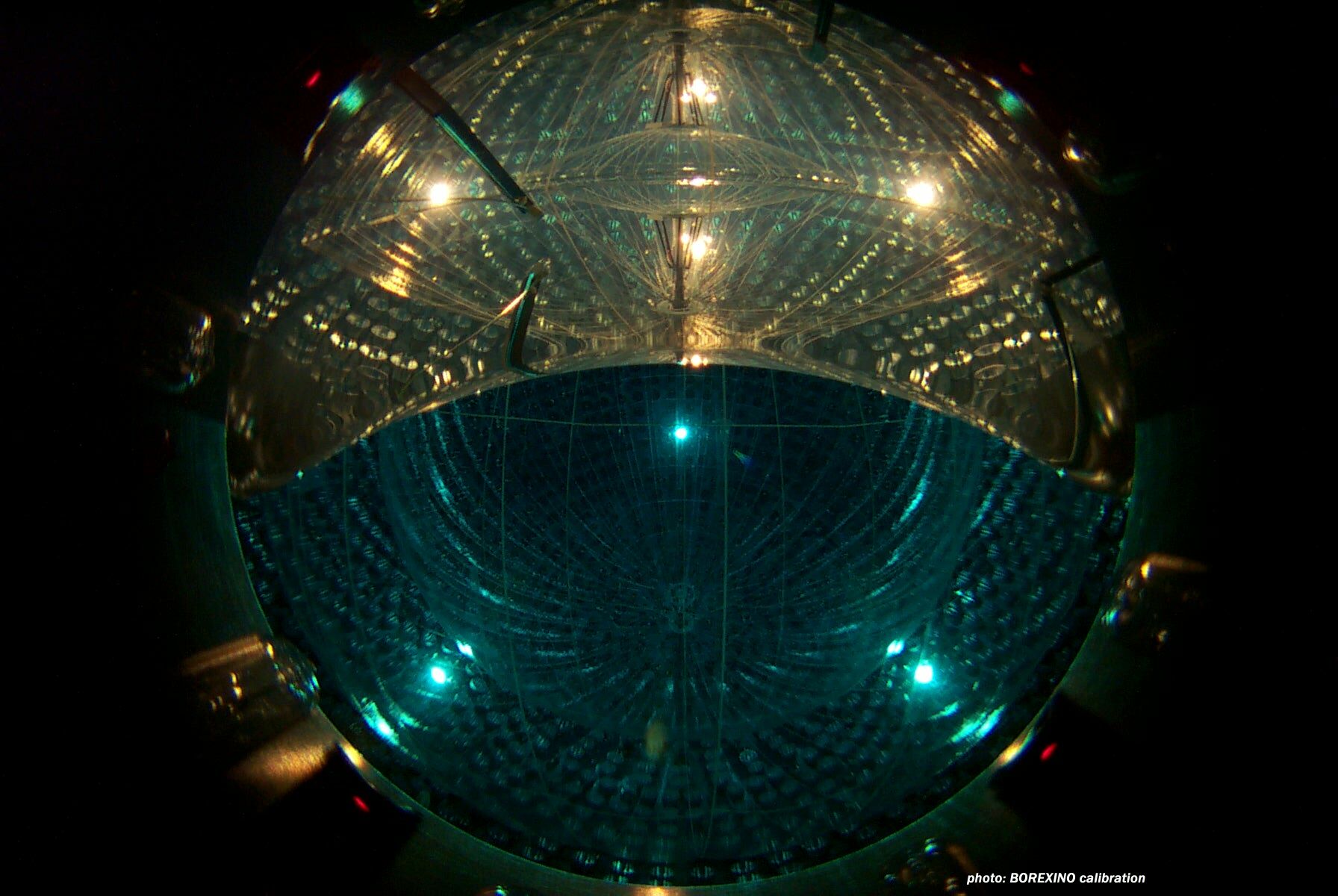 The Borexino experiment (see picture above) is a large steel sphere filled with the world's most pure liquid scintillator. It is designed to detect the faint signal left when neutrinos interact with matter in the liquid. To fight backgrounds from radioactivity and cosmic rays, it is shielded by being placed in a large water tank. Borexino studies the neutrinos from the sun, but with the addition of SOX it can effectively allow us to understand whether the results of a few past experiments (LSND, miniBoone), which were in disagreement with theory predictions, really imply the existence of a sterile neutrino.

Now, the problem with SOX is that it uses an intense radioactive source of neutrinos to allow for those measurements. The source is a 150 kCi (kiloCurie) radionuclide which will be incapsulated in a large steel cylinder block and buried 8.5 meters below the Borexino detector. And in Italy, when somebody say "radioactive", he or she immediately gets the attention of hundreds of ignorants, who for the largest part do not really care about whether there are risks for the population, and only wish to engage in a political battle. These people see the opportunity of winning consensus by misrepresenting things and making the population feel threatened. And they do that by spreading false myths on social media and all the other means of distribution of misinformation they can count on.

A lot of things have been said in Italy about the plans of SOX and the danger of getting this intense source (manufactured in Russia) into the Gran Sasso cavern. I am kind of disgusted by seeing to what heights can the misinformation campaign reach in order to achieve its goals. I am also rather depressed to see that the political party founded by stand-up comedian Beppe Grillo, the "Movimento 5 stelle", is winning this populistic battle, having already obtained some restricting orders on the SOX project from local authorities. These do not matter much, but I can see where the story might end if nothing is done to counter those attacks.

The experiment is very safe. The encasing of the source would not break even under a cataclysmic earthquake (something that has been argued to be the main security issue). I cannot nor aim to convince you here with details, as it would be beyond the scope of this piece. I only hope you can get informed by yourself on the matter, and take action if you wish so, by signing a petition at the Change.org site. (English text also provided there). Thank you for supporting science.


Tommaso Dorigo is an experimental particle physicist, who works for the INFN at the University of Padova, and collaborates with the CMS experiment at the CERN LHC. He coordinates the European network AMVA4NewPhysics as well as research in accelerator-based physics for INFN-Padova, and is an editor of the journal Reviews in Physics. In 2016 Dorigo published the book “Anomaly! Collider physics and the quest for new phenomena at Fermilab”. You can get a copy of the book on Amazon.