Tommaso Dorigo
Supersymmetry (SUSY) is a possible extension of the Standard Model (SM), the currently accepted theory of subnuclear physics. SUSY has the potential to "explain away" some of the  problematic features of the SM, by introducing a new symmetry between fermions (the stuff that matter is made of) and bosons (the vectors of the forces that hold matter together). Introduced in the seventies, SUSY was tested with increasingly stringent tests in higher- and higher-energy collisions at particle accelerators, but all searches for its particles have returned empty-handed. In particular, many physicists thought that the turn-on of the Large Hadron Collider (LHC) eight years ago would result in heaps of new discoveries of SUSY particles, which unfortunately weren't.

While still alive on the blackboard, in the wake of LHC null results SUSY nowadays is not anymore the favourite way to explain away some of the SM deficiencies; yet ATLAS and CMS continue to search for the signatures of "superparticle" decays, as for sure we cannot leave any stone unturned - if a signal is hiding in the large bounty of data delivered by the LHC, we have a moral obligation to find it! No, experimentalists never leave signals unfound there - the scenario in which the data gets published and then some parvenue picks it up and wins a Nobel prize is not to their liking.

While reading a Facebook thread today, I was reminded by my colleague Andrea Giammanco that such a modus operandi of "turning every stone" did not look from the outside the one that the Tevatron experiments  CDF and DZERO were adopting. For 22 years ago theorists were very worried that SUSY was not pursued with enough momentum by those experiments, which were then leading the new physics explorations at the high-energy frontier. In fact, I included in chapter 8 of my book "Anomaly!" a description of the facts around the sending of a letter by theorists to the Fermilab management on the topic. The one below is the relevant text - it is the part of the chapter with a subtitle "Sleeping on the job".

1995 had been an eventful year for CDF: the top discovery had cast the experiment under the spotlights worldwide, the Tevatron had delivered almost 100 inverse picobarns of collisions, and experimentalists had been extremely busy on a number of fronts. The high instantaneous luminosity that the accelerator had been providing toward the end of Run 1B had put pressure to all the scientists who operated the detector. Under highluminosity running conditions, five lost minutes of data taking meant losing on average one clean Z decay to lepton pairs; and three hours of down time were enough to lose a top-pair event. In order to collect all the data they could, shift crews alternated day and night in the control room, keeping all systems up and running normally, and promptly reacting to their occasional hiccups. Trigger settings were constantly revised in order to adjust them to the changing running conditions and to keep the dead time below the psychological threshold of 20%. Subsystem experts carried
pagers 24/7 and spent sleepless nights attending to their detectors, ensuring a faultless operation. The members of the Offline group were also severely burdened, since the large flux of data called for an increased effort to produce calibration constants, reconstruct the events, and make "production datasets" quickly available to analysts.

And then there was the production of scientific results. A team of 4 researchers could work full-time for one or two years to pull off a measurement worth being published. Once formally blessed, the result would be reviewed by three "godparents" assigned by the spokespersons. These internal reviewers would request further verifications, changes, additions, checks. Then the drafting of a physics article would follow along with a phase of "collaboration wide review" when every Joe or Jane would have the chance to raise questions. Everything had to be answered in good order, supporting material had to be provided to anybody who asked for it, and innumerable tweaks had to be made to the text before submitting it to a scientific journal. All in all, the completion of a typical CDF publication took a dozen man-years of work! In 1996 alone, 17 such publications were produced.

Despite all the above activities, CDF must have been giving a different impression to the outside world. Particle theorists, in particular, while quite interested in the new observation of the top quark and in the measurement of its properties, were more intrigued by the possibility that Tevatron data could finally break the standard model. Most phenomenologists were especially interested in the many signatures of supersymmetric particles that CDF and DZERO could detect: supersymmetry was already all the rage in those years. They thus looked at the Tevatron with a mix of apprehension and hope. The Fermilab experiments were producing several searches of supersymmetric particles such as charginos, neutralinos, gluinos, and squarks, yet those analyses appeared insufficient: supersymmetry could be searched for in literally dozens of independent ways. It had to be there and the Tevatron was not doing enough to unearth it!

The matter came up one summer evening of 1995 in a conversation at Opal's restaurant in Santa Barbara, where Pierre Ramond, Joe Lykken, Gordon Kane, Mary Gaillard, and Paul Langacker were having dinner. The five theorists were participating to an ITP workshop at the University of Santa Barbara titled "Unification: from the Weak Scale to the Planck Scale." The workshop had the goal of gathering together string theorists and model builders to create the grounds for a coherent effort in the production of new ideas in the field. Unfortunately, the plan failed, since all stringers were huddling off by themselves the whole time, talking about the then newly discovered "string dualities," a recent exciting development in string theory. One thing united all participants to the workshop, though: they were completely sold on the idea that supersymmetry was the correct way to extend the standard model. In spite of the dearth of experimental hints in that direction, the theoretical benefits of SUSY were hard to ignore. It looked like no other theory could match the elegance and depth of the enlarged symmetry of a supersymmetric world. SUSY was also very welcome by string theorists, as the correctness of string theory could be argued to imply the existence of a supersymmetric copy of standard model particles.

In the face of all those theoretical motivations, it looked as if too little emphasis was given to SUSY by experimental searches at the Tevatron. To make the matter more urgent to US physicists, Pierre Ramond reported that he had just flown in from Europe where he had witnessed the strong excitement of CERN physicists for the ongoing upgrade of the LEP collider to LEP II. The increased center-of-mass energy of the electron-positron collisions about to start being collected by the four LEP experiments promised a lot. CERN would soon give itself a fighting chance of putting its European hands around the coveted trophy of new physics beyond the standard model, by being the laboratory where new supersymmetric particles were discovered!

While LEP II was anticipating those promising new datasets, the Tevatron had already a much broader territory to investigate at its arms' reach: CDF and DZERO were sitting on a huge pile of data where hidden treasures might be hiding. The thought that the two Fermilab experiments were not investing enough efforts in SUSY searches was disturbing. The five colleagues that evening found out they fully agreed that it would be a shame for particle physics in the USA if the chance of the discovery of the century were stripped from the leading center of particle physics in America and offered on a silver tray to CERN.

Something had to be done. Ramond put forth the idea of writing a letter to the Tevatron experiments; this found everybody enthusiastic. The five theorists spent their evening laying down the scheme of the text and a list of prestigious names who could be asked to add their signatures below it: Jonathan Bagger, Vernon Barger, Howard Georgi, David Gross, Lawrence Hall, Frank Paige, Roberto Peccei, Joseph Polchinski, Steven Weinberg, Frank Wilczek, Edward Witten, and Bruno Zumino. Back from dinner, Ramond and Lykken started to draft the letter. After a few revisions, the letter was sent to the 12 potential subscribers identified at the dinner. All of them agreed to sign it, except Howard Georgi. And so it was that in the fall of 1995 the letter reached the hands of Fermilab director John Peoples, as well as those of the experiments' spokespersons Paul Grannis and Hugh Montgomery (DZERO) and Bill Carithers and Giorgio Bellettini (CDF). The text, dated November 15, was a statement of the belief of the 16 subscribers:

"As the union of special relativity with quantum field theory sixty years ago predicted the existence of antimatter, supersymmetry [...] predicts a new form of matter, the superpartners of the elementary particles. It is our belief that the measured values of many of the standard model parameters point to their existence [...]:
- The large value of the top quark mass [...] yields a natural explanation of electroweak symmetry breaking [...]
- The measured value of the weak mixing angle is linked, through supersymmetric unification, to the existence of superpartners with masses of hundred(s) of GeVs
- The absence of corrections from new physics in the precision measurements of the standard model is naturally explained by the decoupling of the superpartners from its radiative structure.

Theorists thus urged experiments to invest more efforts in the hunt for SUSY:

"We, the undersigned, believe that Fermilab has unique detection possibilities for supersymmetry, and urge you to direct your laboratory's efforts in that direction, and ask the leaders of the collider detector collaborations to intensify their search for massive superpartners."

[Below: the header of the letter sent by 12 theorists to the Fermilab management] 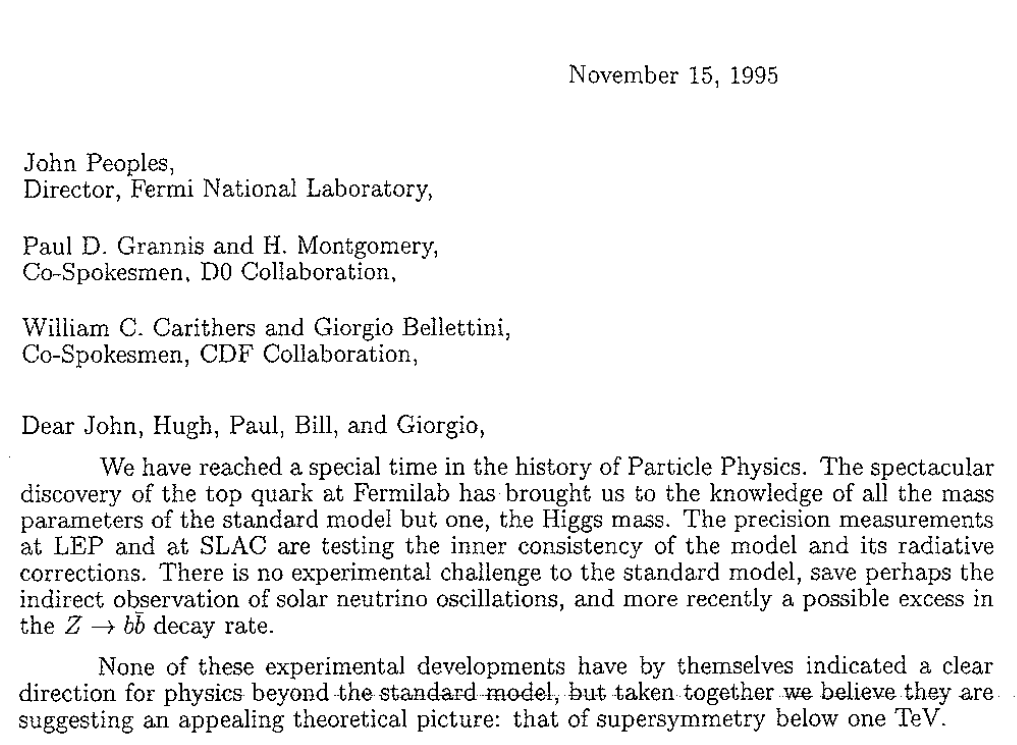 By reading the letter two decades after it was written, one cannot help grinning at the questionable encroachment. Without being asked to do so, 16 influential particle theorists attempted to steer the physics program of the Fermilab experiments toward a broader plan of investigations of supersymmetric signatures. Those studies of course were a good thing in principle. But the resources needed would have to be drawn away from other interesting measurements and searches. With hindsight, the three "experimental hints" that the theorists mentioned in their letter do not look that compelling. Yet, the call to arms had significant consequences for the research program of CDF and DZERO.