Tommaso Dorigo
Our current understanding of the Universe includes the rather unsettling notion that most of its matter is not luminous - it does not clump into stars, that is. Nobody has a clue of what this Dark Matter (DM) really is, and hypotheses on what it could be made of are sold at a dime a dozen.
On the other hand, we clearly see the gravitational effects of DM on galaxies and clusters of galaxies, so the consensus of the scientific community is that one of those cheap theories must be true. What make this very close to a dream situation for an experimental scientist is the fact that we do have instruments capable of detecting, or ruling out, dark matter behaving according to most of the majority of those possibilities.

In the course of the past few decades a number of experiments looking for dark matter have been proposed, and many have been built and are collecting and analyzing their datasets. The general idea for ground-based searches is that if dark matter is made of particles, like luminous matter is, then we ought to see its interaction with ordinary matter as it drifts past us while our planet moves around. In fact, if these particles do not shine then they presumably do not clump together into large structures. Most theories predict that DM thus just hangs around galaxies, weakly bouncing off ordinary matter without significant macroscopic consequences other than their own weight making a difference in the way galaxies rotate and move around.

One of the most sensitive experiments looking for dark matter particles is called XENON-1T. It is a large vessel of 2 tonnes of liquid Xenon (hence the name, save for the 2x1 offer of more active material), subjected to an electric field and observed by photomultiplier tubes.
The idea is that when DM hits a Xenon nucleus, it produces both visible photons through scintillation, and electrons. Detecting a signal from both results in a precise reading of what took place, as the electron signal can be mimicked by beta decay backgrounds, which does not produce photons, while the photon signal can be due to neutron backgrounds, which do not produce strong electron signals.

Technically the arrangement is called "time projection chamber", as the coordinates where an interaction is produced can be located by converting into a traveling distance the time it takes for an electron to drift through the electric field, finally yielding an electroluminescence signal which is delayed with respect to the primary photon signal produced by the collision.

In order to be sensitive to small fluxes of potential DM crossings, the detector is conveniently located in the Gran Sasso laboratories, in central Italy, and is thus shielded by the Gran Sasso mountain sitting on top of it. The rock is effective as a background reduction, as it stops most of the cosmic radiation. The most insisting and penetrating particles are dealt with by a muon veto, provided by a water Cherenkov system around the sensitive tank.

In previous analyses of the collected data, XENON used both the prompt photon signal and the delayed electron signal to characterize the possible DM candidate collisions. This, however, restricts the sensitivity to DM masses above a few GeV, because lighter DM particles would not produce enough of a photon signal to be detectable. In the article published on the Cornell ArXiV two days ago, however, the collaboration used only the electron signal, reaching out to much lighter mass. The absence of the photon signal forces the scientists to fight backgrounds much harder by tighter selections on the event characteristics, but the net result is an increased sensitivity.

When we talk about sensitivity and DM mass you should immediately have in mind what the money plot of these searches is. This is a graph where on the x axis you put the putative mass of the DM particle, and on the vertical scale you put the rate of collisions, or a function of that.

Physicists, who like to make things complicated to laymen, prefer to plot their results in terms of the cross section of DM-matter interaction on the y axis, but at the end of the day it does not matter much - the graph will look the same: large rates are excluded by previous searches, and the experiment which can chop off a wider swath of unexcluded "cross section versus mass" regions wins.

It is a bittersweet win, to be sure, as everybody would love to see a signal rather than meekly place an exclusion boundary a bit lower than the other guy. But still, this is great science if you ask me: we are wiping off the board many of the proposed models for how a possible dark matter particle could be and how it could interact with ordinary matter.

The article on the arxiv spends a lot of ink explaining how accurate event selections could make up for the waived photon signature, still taming backgrounds. You are welcome to read the details here. But if you are only curious to know what is the net result, the following graph will do the job. It is an extract of a figure in the paper, which shows upper limits on the cross section versus mass, for different kinds of physics signals. 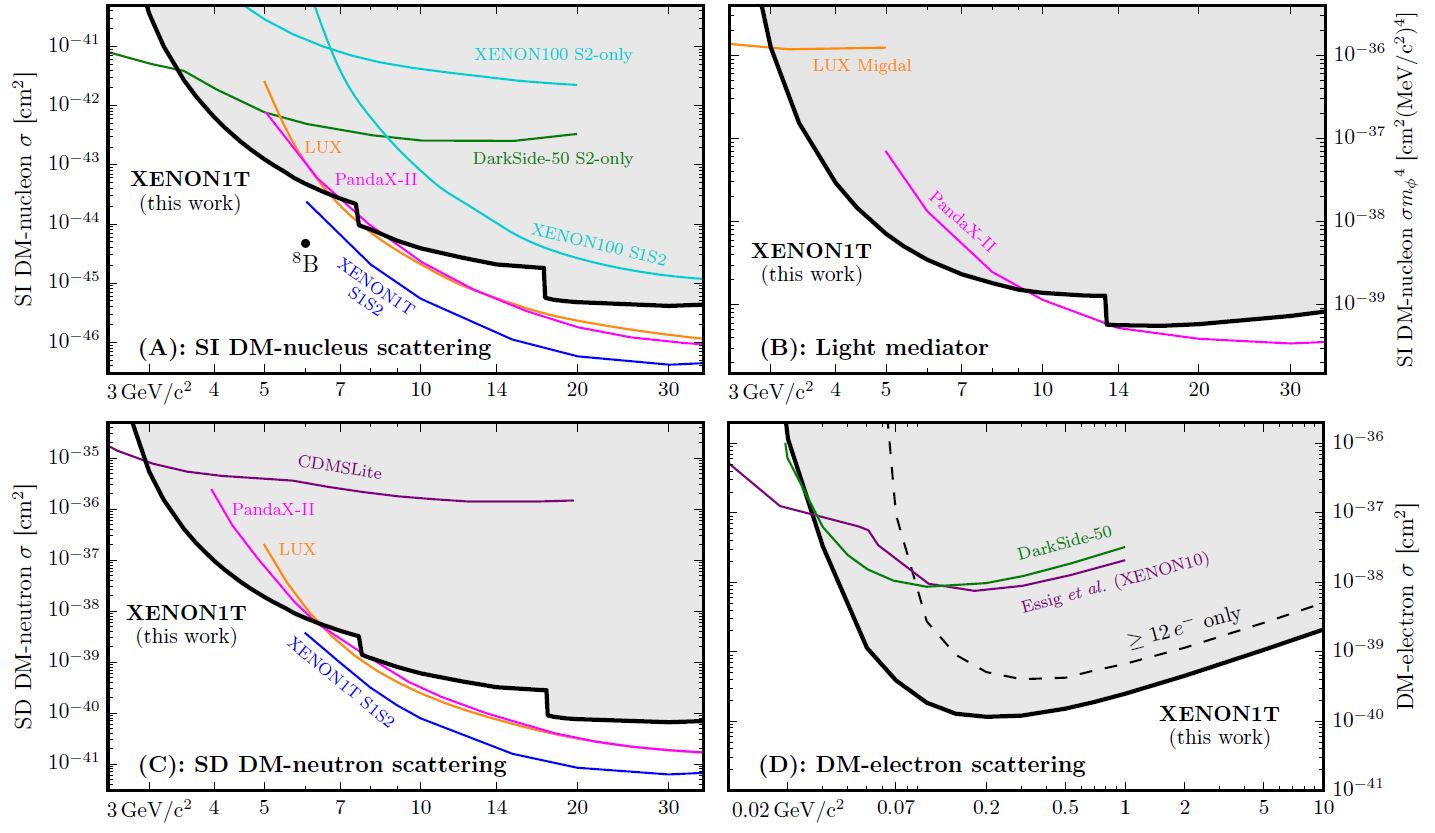 On the top left you see the so-called "spin-independent" cross section limit on DM-nucleon collisions. The idea is that you check what the hit rate of DM particles can be on individual protons or neutrons in the Xenon nuclei. Here you can see that the new analysis does not break a lot of new ground: the dark line only extends a little bit below others in the 3 to 6 GeV mass range. Note, however, that the vertical axis is in logarithmic scale (as the x axis is, although this is irrelevant here): the small curved triangle which was excluded corresponds to having limited the interaction rate of a DM particle of 5 GeV, say, by one order of magnitude more than what we previously knew.

By the same token, on the top right you see that in the same mass range the new XENON result extends down the cross section limit by up to two orders of magnitude, for models which include the existence of a light mediator in the DM-matter interaction.

On the bottom left, a similar picture is drawn for the so-called "spin-dependent" cross section of a DM particle interaction with neutrons. The biggest gain is however shown in the bottom right panel, where the cross section for direct scattering of DM particles off electrons is shown to be constrained by over one order of magnitude for DM masses below 0.1 GeV, and by over a factor of two above that value.

Overall, it is very nice to see (especially if you already knew) that applying new data analysis and reduction techniques pays such strong dividends. This also shows, in my opinion, that these DM search experiments have still a lot of optimization work to do! In any case, I congratulate the XENON colleagues for their careful work and these new great results.