Gareth Fabbro
I'm getting my geophoto today in early, as it is the lab's Christmas party tonight...

Today's photo is of Iguazú Falls, which straddle the Argentina/Brazil border (spelt Iguaçu on the Brazilian side).

I posted this picture mainly because it is pretty, and waterfalls are geological, right?  But if you do want some geology, the rocks that you can just about make out behind all the water and vegetation are basalts, and a particular type of formation known as a flood basalt.  Flood basalts represent periods of intense volcanism, and are sometimes thought to lead to mass-extinction events.  They are thought to happen when a new plume of hot material rises through the mantle and reaches the crust, and often occur around the breakup of continents.  The flood basalts here were erupted about 100 million years ago, during the opening of the South Atlantic.  Some of the same flood basalts are found today in Africa. 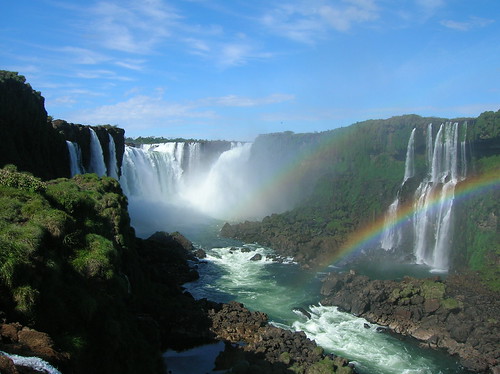