Mi Cro
CMOS Imaging sensors are the sensor of choice for most consumer digital cameras. They tend to be cheap, low power, compatible with the fabrication equipment that much of modern digital electronics is manufactured on, and other than the very early generations fairly high quality.
Canon EOS cameras became the defacto standard for astrophotography due to low noise and direct access to uncompressed RAW image formats.

CMOS sensors use a reverse biased PN (or PIN) junction (diode) as a photo-detector. In the Canon sensor the diode which acts like a capacitor is charged with 5v, and when struck by a photon, electron-hole pairs at the junction dissipate some of the charge. After some amount of exposure time, each photodiode's remaining charge is read, amplified based on the ISO setting of the camera, and then stored as the pixel value. Ultimately as the array of diodes are read, they compose an image.
Reverse biased diodes have a leakage current. This leakage has a strong correlation to temperature, and in long exposure imaging reduces image quality.

But some very clever people have figured out how to create a statistical map of thermal noise and subtract it (as well as circuitry noise) from your astronomical images greatly enhancing the quality.
But to get the right map, the images of thermal noise have to be taken at the same temperature and for the same exposure time. This requires logging of temperatures while your imaging, so you can (usually) later on take your Dark images. You take them later because you don't want to waste half your night not capturing data.

I remembered that in many cheap thermometers they use a diode to measure the temperature. And I thought it might be useful to be able use the camera to know what temperature the sensor was at. But what was lacking was a calibration.

So I set out to test my theory, and calibrate my camera. Because sensors use power, they will warm up during use.
So, my procedure was to take a series of 10, 10 sec dark exposures (lens cap on) right after powering up the camera at various temperature in the garage during the winter. And then plotting the image means out in a line graph.

But, I didn't get a smooth line(I'd show you, but I can't find them). Some of the data points were as I expected, but some were higher than they should have been. I messed around for a few days trying to figure out that I'd done wrong. At which point I decided maybe the problem was with the means. I'd not actually looked at the frames I collected, just the stats of the image.

When I actually looked at them, About 1 in 10 had images, a handful of pixels exposed, some near full exposure. Then I remembered, some more seasoned astrophotograpthers had mentioned you can sometimes detect tracks of cosmic rays in your images. 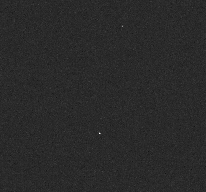 To really see the tracks left, download these little pictures and zoom in to a few hundred x.

Some of the pixels that were exposed would be a brightly lite image if it was a whole sensor full, and knowing that what was measured had to arrive in some very small fraction of a second, their intensity must have been very high, sort of cool to think.

I thought about making a thick metal shield to limit which direction I detected them from, but the thick aluminum tube I had wasn't big enough for the whole camera, but some day I might still. I'd like to know if they're solar or extra-solar cosmic rays.

Anyways, I selected a couple of pixels that were clear of cosmic rays in each image and plotted those out, and I had a nice line, just what I expected to see.

Not long after my camera failed, and I got a newer, better one. And if my imaging is done near freezing there's not a lot of thermal noise, so I don't take a lot of darks, but If I need to match temps, I know where I can find a thermometer.
Virtual World(s)
More Articles All Articles
About