Chris Rollins
It's been nearly thirty years since the last application for construction of a nuclear power plant was filed in the United States. Despite the age of the reactors already operating, however, the amount of our power generated using nuclear sources is second only to coal. The energy generated by nuclear plants is also increasing steadily, as delays in refueling shorten and reactors operate for longer periods of time. However, there are still numerous environmental concerns regarding the waste products generated by American nuclear reactors - by 2010, the total amount of dangerous waste will exceed 77,000 tons. Now, researchers have found a way to reprocess that waste using new technology while still generating power.

Conventional reactors in the United States create something called transuranic waste - a byproduct of the uranium used in fission reactions that is highly radioactive and decays very slowly. This waste is currently stored in sites around the country. Methods to reprocess nuclear waste exist and are commonly used by the Japanese and French in their reactors - however, the highly toxic nuclear "sludge" (as scientists call it) is too unstable to burn in conventional reactors. 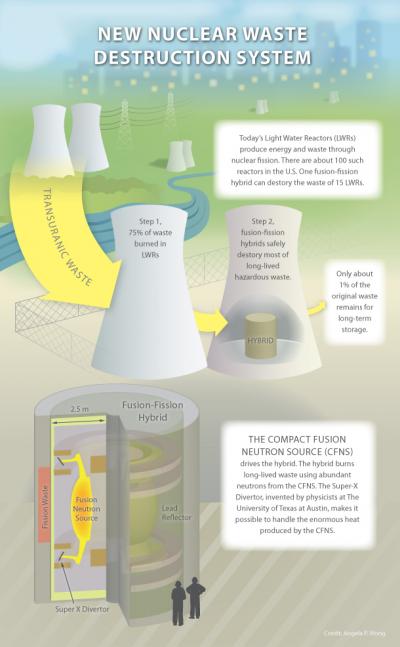 Second Step: The waste from traditional reactors can be reprocessed into a less harmful form with the help of a fusion reactor. Photo Credit: Angela Wong

Now, physicists at The University of Texas at Austin have come up with a way to reprocess nuclear sludge using a much newer technology - nuclear fusion. In a conventional nuclear reactor, uranium atoms with an extra neutron expel that neutron and release a little bit of heat. When that neutron strikes another uranium atom, the next atom absorbs that neutron and re-emits it, again releasing heat. Combined, all of the reactions in the uranium produce a significant amount of heat, which is essentially driven by neutrons.

Fusion power, by contrast, involves fusing together two hydrogen atoms into a helium atom - a process that produces neutrons and a great deal of heat. By combining a fusion reactor with a fission reactor, the physicists have provided a neutron source to burn the sludge while also producing heat, and therefore electricity, from the fusion reaction itself.

"To burn this really hard to burn sludge, you really need to hit it with a sledgehammer, and that's what we have invented here," says Mike Kotschenreuther, senior research scientist with the Institute for Fusion Studies (IFS) and Department of Physics.

The fusion reactor UT has developed is called a Compact Fusion Neutron Source, and it depends on a crucial invention called the Super-X Divertor: a method of containment for the high amount of particle flux and energy present in a small fusion reactor.

"The intense heat generated in a nuclear fusion device can literally destroy the walls of the machine," says research scientist Prashant Valanju, "and that is the thing that has been holding back a highly compact source of nuclear fusion."

What's promising about this technology is its efficiency. Each CFNS reactor can process the waste of 10-15 conventional reactors while generating electricity in the process. The researchers view it as a bridge technology - a stepping stone from fission to fusion. Eventually, scientists hope to be able to harness the full power of fusion in a self-contained and self-sustaining plant. International projects such as the International Thermonuclear Experimental Reactor are working toward that goal. The reality is, however, that there is a large amount of nuclear waste waiting to be processed and it needs to be dealt with. Besides, any research into fusion technology will aid the development of full-fledged fusion reactors such as ITER.

"The hybrid we designed should be viewed as a bridge technology," says Swadesh Mahajan, a senior research scientist. "Through the hybrid, we can bring fusion via neutrons to the service of the energy sector today. We can hopefully make a major contribution to the carbon-free mix dictated by the 2050 time scale set by global warming scientists."

Nuclear power may still scare many people, but it's quickly gaining popularity as the effort to reduce greenhouse gas emissions accelerates. If their new reprocessing technology proves feasible, maybe they'll create some converts.

"Most people cite nuclear waste as the main reason they oppose nuclear fission as a source of power," says Mahajan. Kotschenreuther agrees that their inventions might make the general population come around. "Our waste destruction system, we believe, will allow nuclear power-a low carbon source of energy-to take its place in helping us combat global warming."