Chris Rollins
As early as 1890, people were beginning to think about harnessing the power of the ocean. During the twenty-year span between 1890 and 1910, there were wave power generation stations built all along the Southern California coast. The advent of cheap petroleum coming straight from the ground, however, has taken the focus off of energy generation solutions such as wave power for decades now, and as a result the only surviving wave motor from the large Southern California program is buried in the sand at the foot of the Manhattan Beach pier. Now, thanks to the huge push toward green energy sources and freeing the world from oil, wave power has seen a flurry of research and innovation in recent years.

Wave power utilizes the vertical motion of waves to generate electricity. In most designs, the wave motion is turned into mechanical motion through the use of something buoyant and then converted into electrical energy. This is different from other oceanic energy-creating techniques such as tidal, which uses ocean currents or tidal forces to generate power.

Although many prototypes are being tested and verified by different companies and educational institutions, there is currently only one commercial wave power plant in operation, three miles off the coast of Portugal. A fleet of wave generators produced by Pelamis Wave Power will eventually generate 21MW of electricity by utilizing the differential rotation between four long, rigid sections as the waves pass underneath them. The motion increases the pressure in a working fluid inside the power-generation units, which is then used to drive a hydraulic motor. The hydraulic motor drives a generator, which feeds electricity through a transformer and out through a single cable. Each Pelamis unit generates a maximum of 750 kW - enough to power about 750 homes - when wave conditions are nominal. 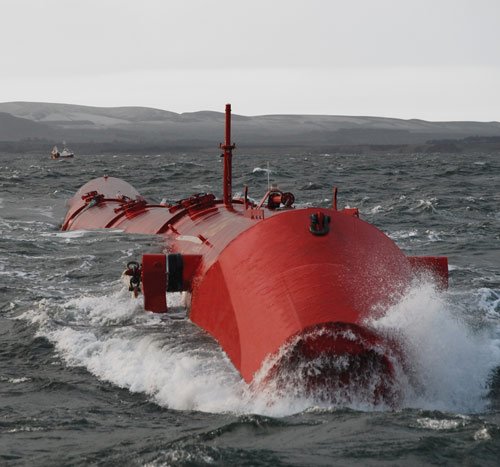 Requiring nominal wave conditions is a significant drawback of wave power. Most devices have to be "tuned" to the most common frequency of waves in the region (called the spectral density). Only during conditions where the frequency of waves is nominal is the unit living up to its full generating potential. Additionally, wave power generators have to deal with storm conditions, which can wreak havoc on even the strongest seafaring equipment.

New innovations attempt to deal with the wave frequency problem. One, called Wavebob, uses a floating station with a chamber attached beneath it. Differential motion is generated between the two because of different buoyancies. The device can be tuned to specific types of waves by altering this buoyancy on board. Wavebob offers an autonomous control feature, allowing an immediate response to ocean conditions. 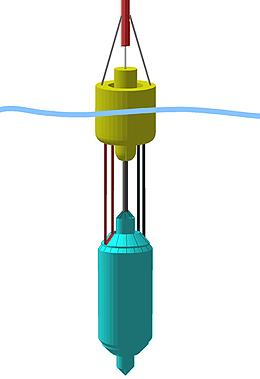 Different Buoyancies: The Wavebob can alter the buoyancy of the buoys to account for different wave frequencies, or can rapidly detune in the event of a large wave. Photo Credit: Wavebob

Most recently, researchers at MIT have developed a way to harness a large number of wave frequencies using an entirely different scheme. Instead of using mechanical motion, the MIT design has an open chamber which allows water to flow in and out, increasing and decreasing the air pressure in a closed part of the chamber. This differential pressure is used to move air and drive a turbine. Using a computer model, the MIT team was able to optimize the shape of the chamber to operate over a wide range of wave frequencies, increasing the overall efficiency of the unit.

Scientists at the University of Uppsala in Sweden have greatly simplified wave generator designs using a linear motor instead of a rotating turbine to generate electricity. Turbines require a high speed to be efficient, and although waves contain plenty of energy, that energy is presented through force, not motion. In order to run a turbine, that force needs to be converted to motion through a gearbox, which adds complexity. Using a linear generator highly reduces the number of moving parts and therefore reduces maintenance costs - especially in the harsh ocean environment. The only additional part required for the device is an AC/DC converter, which allows the power to be transmitted to the grid. Uppsala University is already testing one set of generators, with two more plants planned in the near future.

Wave power, like other renewable energy sources, has yet to reach the operating and development costs to allow it to compete with fossil fuels, and it may be many decades before prices fall low enough to spur major investment. However, as the value of oil flirts with high prices, more and more governments may be interested in harnessing the power of the ocean.

Chiang Mei, the Ford Professor of Engineering in the Department of Civil and Environmental Engineering at MIT, sounds optimistic: "Given the future of conventional energy sources, we need lots of research on all kinds of alternative energy. Right now, wind energy and solar energy are in the spotlight because they've been developed for a longer time. With wave energy, the potential is large, but the engineering science is relatively young. We need to do more research."