If you want to know how a wind turbine works you may visit Wikipedia or the Office of Energy Efficiency and Renewable Energy. 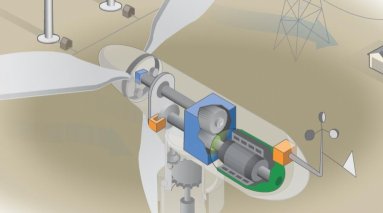 You would not normally look for scientific information on a case law web site, but there is now an excellent scientific description of wind turbine basics in a judgement on patent law as applied to a wind turbine design.

In Wobben Properties GmbH v Siemens Public Ltd Company&Ors [2017] EWCA Civ 5,  Lord Justice Kitchen sets out the basic science behind wind turbines and their operating principles.  The extract below covers the basics, but the full report on BAILLI is well worth reading.

7.  The patent is directed to a general wind turbine engineer, referred to by Mr Butterfield as a systems engineer. This engineer would obtain input from a control engineer where necessary. Both of these engineers would have similar backgrounds and be interested in the control aspects of a turbine. The following description of the common general knowledge of such a systems engineer, the notional person skilled in the art, is drawn in large part and with gratitude from the decision of the judge and from those parts of the reports of the experts about which there was no dispute.

9.  Wind turbines convert the kinetic energy of the wind into electrical energy. This is achieved by a generator. A generator is designed to have a maximum electrical power output, the rated power, at which it can be operated continuously. Exceeding this limit can lead to the generator overheating or suffering other damage. By 1995 commercial wind turbines generally used synchronous generators or induction generators. They both have an input shaft and when torque is applied to that shaft, the turning motion produces electrical output from the generator. It also induces a reaction torque on the shaft. When a synchronous generator is connected directly to the electricity grid, the reaction torque is such that the rotation speed of the generator is locked to a fixed multiple of the grid frequency. When an induction generator is connected directly to the electricity grid, the generator speed is not locked precisely to the grid frequency but instead will vary or slip by, for example, 2 to 5% around a fixed multiple of the grid frequency.

10.  At the priority date, the majority of commercial turbines contained synchronous or induction generators which, when the turbine was generating power, were connected directly to the grid. Once there is sufficient wind to make generating electricity worthwhile, the turbine is connected to the grid and the rotor rotates at its constant or near constant rate determined by the grid. As the wind speed increases, the power generated by the turbine increases (power = torque x speed) until rated power is reached. If the wind speed increases still further, the power generated by the turbine is held approximately constant using aerodynamic control methods such as pitching the blades into the wind (feathering), pitching the blades to induce a stall or designing the blades so that they stall automatically. Yaw control can also be used to turn the turbine out of the wind.

11.  Variable speed turbines were also in commercial use although relatively few manufacturers were producing them. Variable speed operation requires some form of power electronics to decouple the generator speed from the grid frequency. The power electronics normally convert the electricity from an alternating current produced by the generator to a direct current and then back to an alternating current at a fixed frequency suitable for the grid. The power electronics also allow the reaction torque of the generator to be varied. Variable speed turbines which have the ability to vary the pitch of the blades are called variable speed variable pitch (VSVP) turbines. This combination of features, that is to say the ability to vary both the torque and the blade pitch, was referred to by the judge as the "two knobs to turn" feature. Wobben describes VSVP machines as being "old and new" at the priority date. The idea was old but commercialisation had been held back by the high cost of power electronics. By 1995, the priority date of the patent, the falling price of power electronics had made VSVPs commercially feasible and the industry was focused upon them.

12.  As Professor Leith explained, below rated wind speed, VSVP operation allows the rotor to operate at different speeds, depending upon the wind speed. In slower wind speeds, the reaction torque can be adjusted so that the rotor rotates at a slower speed. In higher wind speeds, the torque can be adjusted to allow the rotor to rotate more quickly. Adjusting the rotation speed to match the wind speed in this way maximises the power generation efficiency of the turbine. VSVP operation can therefore be used to increase the efficiency of the turbine in the operating region below rated wind speed.

13.  When the wind speed increases above the rated wind speed, the turbine is operated at approximately constant rotational speed. The reaction torque and the output power of the generator are held constant, and the rate of rotation is held at approximately the rated rotor speed by continuously adjusting the pitch angle.

14.  These different modes of operation are the foundation for the practical advantages of the VSVP turbine, as I shall now explain.

The advantages of VSVP operation

15.  VSVP turbines have two advantages over constant speed turbines and these are conveniently described by reference to this diagram which must be seen in in colour: 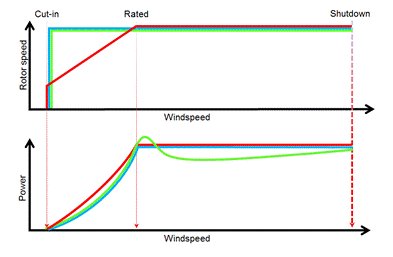 Read more >>
.
The Chatter Box
More Articles All Articles
About