Michael White
What kinds of genetic changes are required to evolve significant changes in body shape and size? The availability of affordable, state-of-the-art DNA sequencing and array technology has made it possible to study evolution at a level of molecular detail inaccessible just a decade ago. 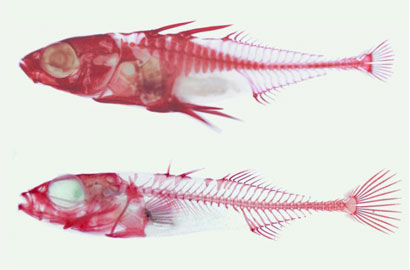 Researchers are uncovering the details of molecular evolution, and answering some interesting questions along the way, such as the relative importance of changing genes themselves versus changing how those genes are regulated. Recall how genetically similar we are to chimps, and yet how morphologically different we are. Or think of the fact that humans have ~22,000 genes (give or take a few thousand) - not much more than a nematode worm that has only 1000 cells. Intuitively, this seems to suggest that the key difference between worms and chimps and humans is not what genes you have, but how those genes are regulated. However, we can't just assume this conclusion; we have to go look and see whether protein-coding or non-protein-coding DNA changes are the favored means of achieving evolutionary change. (Not surprsingly, the answer so far seems to be both.)

In any case, there are many more questions like this about molecular evolution that we can now begin to answer with the modern experimental and computational tools available to biologists. But even with the slew of modern tools we have available, many of today's biologists are studying evolution by taking a page out of Darwin's playbook: they are studying evolutionary change at its most incipient point, at the level of differences between members of the same species. In other words, variation between populations of the same species is just evolution on a small scale, because different populations of the same species are what, in some cases, give rise to new species.

What's the advantage to studying variation within a species? In a word, sex. You can cross-breed two different members of the same species, but not, in most cases two members of different species. (For one approach to getting around the problem of species barriers, check out this research.)

The Benefits of Breeding

Why is cross breeding so critical? It's a powerful way to identify those genetic changes that actually make a difference. To illustrate this, imagine that you want to know what genetic changes make humans different from chimps. You can compare the two genomes and note the differences, but it's difficult to tell which of those changes are actually meaningful functional changes. We do have ways of guessing at which changes might be selectively neutral changes, and which ones are under the pressure of natural selection, but even if we can identify which regions of the human genome have been under selective pressure to diverge from the chimp genome, we have no idea what the functional effects of those changes are.

What we want to do is the classical problem of genetics: we want to connect genotype with phenotype, genetic variation with variation in physical traits. To do this, we turn to cross-breeding within species. The idea is that you cross two different animals (or plants or yeast) with big differences in your trait of interest, to generate offspring. Those offspring will resemble their parents to different degrees. If you cross a lean breed of pig with a fat breed, you'll get offspring that are lean, fat, or something in between.

In other words, each offspring has received a different genetic inheritance from each parent. The next step is to correlate that genetic inheritance with the phenotype, with the traits in the offspring. Let's say that all of the fattest piglets, in our hypothetical cross, received Dad's copy #1 at position z on chromosome 11. We would strongly suspect, then, that Dad's #1 variant of whatever gene is at that position contributes to being a fat pig.

Looking for correlations like this after a cross is a little more complex than I've laid out here, but you get the idea. The result, at the end of this process, is a set of quantitative trait loci, or QTL; regions of the genome (usually somewhat large regions, not yet narrowed down to single genes or single genetic variants) that genetically contribute to a particular trait.

Finding QTL is the reason why studying evolution by studying variation within a single species is so powerful: at the end of the process, you have focused in on only those regions of the genome, only those genetic differences between physically different individuals, that actually contribute to variation in a particular trait. The genomes of any two parents from the same species will be filled with genetic differences, but which differences matter? QTL hunting answers that question.

One particular focus of study has been the protective, bony pelvic girdle, which has been lost on some freshwater populations. Researchers in the lab of David Kingsley, at Stanford, are interested in understanding what kinds of evolutionary genetic changes lead to the evolution of pelvic reduction. Following the QTL-mapping procedure I outlined above, they've zeroed in on one particular gene called Pitx1. Changes in this gene explain much of the evolutionary changes in pelvic girdle observed in different stickleback populations. Evolution as acted on the same gene, again and again, to reduce the pelvic armoring that is important for survival in marine environments, but appears to be a hindrance in freshwater ones.

Pitx1 is a developmental regulator gene that is expressed in the developing hindlimbs of many different vertebrate species. The Kingsley lab discovered that populations with reduced pelvic girdles were missing a key regulatory region near the gene that controls expression of Pitx1. Without this regulatory region, Pitx1 is poorly expressed and the fish don't develop a pelvis.

One of the amazing results of this study is repeat performance of evolution: in 9 of 13 pelvic-reduced populations, this key regulatory region was missing, but it was deleted by different mutations. That is, evolution independently hit upon the very same genetic solution for pelvic reduction in these fish 9 out of 13 times. And in 21 stickleback populations with no pelvic reduction, the Pitx1 regulatory region was always intact, which means that it's critical for maintaining pelvic armor.

Because sticklebacks are so manipulable, the scientists could directly test the effects of this Pitx1 regulatory region. When they put that Pitx1 regulatory sequence back into eggs from fish with no pelvis, the eggs developed into fish with pelvic armor.

The lessons of this this research are clear: we can watch evolution in action, at high molecular resolution, by studying variation within species; evolution can hit upon the same solutions over and over, and finally, sometimes regulatory changes are the key to phenotypic change.