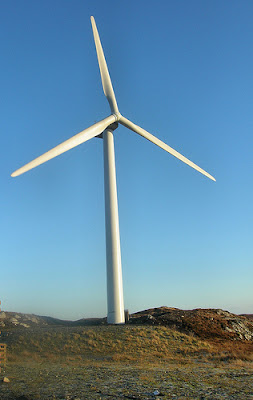 It takes about as much energy to make the nitrogen fertilizer for an acre of corn (150 lbs) as it takes to drive a car 600 miles, and because it is made using natural gas it has a carbon footprint equivalent to driving the car 650 miles.  Now imagine that for more than 90 million acres of corn.  That is a lot of energy.  But what if that energy and greenhouse gas footprint could disappear?  This might actually be possible.

By way of background, nitrogen is one of the three most important minerals that plants need to grow, and the basis of the protein we require in our diets.  Some plants call legumes “fix” their own nitrogen with the help through a mutualistic relationship with a particular kind of bacteria.  From an environmental point of view, this sort of  biological nitrogen fixation is the best way to make nitrogen fertilizer.   US farmers already plant about 100 million acres of legume crops (soybeans, alfalfa...).  We could probably supply a fair amount of additional nitrogen if legume-containing winter cover crop mixes were more broadly used.  Still, to grow our conventional crops like corn, wheat, barley, fruits, most vegetables.... we need to make synthetic nitrogen.  Even organic is dependent on that flow (see previous post, Cows Don’t Make Fertilizer).

Large scale, crop-available nitrogen production became possible about 100 years ago when two German scientists named Haber and Bosch sequentially figured out how to turn the nearly 80% nitrogen in the atmosphere into plant available forms.  All it takes is a source of hydrogen, the air, and a catalyst to make ammonia. They got a Nobel Prize for this, but the big down-side has been that the most cost effective way to do the Haber-Bosch process has been to get the hydrogen from natural gas.  The question is whether there is an alternative to this major use of a fossil fuel (~5% of total natural gas use).

The Answer My Friend, Is Blowin' In The Wind

Bob Dylan was famously vague about what "the answer" actually was, but I'm guessing that he wasn't thinking about a solution to the fossil fuel dependency of crop fertilizers.  Even so, his reference to wind may actually be part of the answer to this real-world dilemma.   The Haber-Bosch process just requires hydrogen and that can easily be made using electricity and water (electrolysis).  The electricity could be from a renewable source like wind, solar, hydro etc.  I once wrote a blog post wondering if it might be possible for someone to develop a small-scale Haber-Bosch process that could be run using something like wind energy.  It turns out that at least three groups were already working on different approaches to just such an invention ( University of Minnesota, Electrogen Hydrofuels, Altmerge).  I am really excited about this possibility, particularly the later two because they are working on very small scale units.  For instance the one from Electrogen is designed to fit in a standard truck/rail container.

If any of these processes can be successfully commercialized, it could dramatically alter the fertilizer paradigm.  It would give farmers a way to locally and independently produce their own fertilizer and thus avoid the price fluctuations driven by the general energy market.  A farm could install a wind turbine and one of these units and let it make the next season’s fertilizer any day that the wind blew.  These companies are also working on ways to turn the ammonia generated into something easier to store like liquid ammonium nitrate (not the dry form that can be turned into a bomb).

Such a system might also be able to provide village-level fertilizer generation in parts of the world where small-holder farmers don't have practical access to nitrogen fertilizer today.

This nitrogen fertilizer would be "carbon neutral" from a manufacturing perspective.  Since the energy used to make fertilizer is a large part of the overall carbon footprint of agriculture (about 40% for a corn crop), this change would be highly significant.  Nitrogen fertilizers will still always have other environmental issues, but there are sustainable soil health management systems that best address those.

The irony is that this sort of carbon-neutral nitrogen fertilizer wouldn't qualify under the current rules for use in organic because it would still be “synthetic.”  Of course plants don’t care about this.  They can only absorb nitrogen in its nitrate or ammonium ion form which is the same whether it originated as synthetic or natural fertilizer.