More than half, namely 60% of college graduates are female. Is this discrimination against men? And is the currently loudly demanded (and at Missouri University apparently well received) number of 10% Black faculty reasonable, or is this rather racist anti-East-Asian anti-Semitic discrimination?

Students of different university majors have different average IQ values. The worst is physics and astronomy with an average IQ of 133, followed by philosophy with 129, both far away from the population average, which very roughly is around 100. The best is social work’s <g> = 103. However, high IQ fields have few students! Many US universities are heavy on education majors and suchlike, so their average student is hardly more intelligent than the average US population.

China’s universities for example are still elitist and therefore surely fail to advance the coincidental, rapid steamroller advance of China any further. US universities approach progressive equality and will thus reverse the completely unrelated and counter-intuitive, mysterious decay of the US. 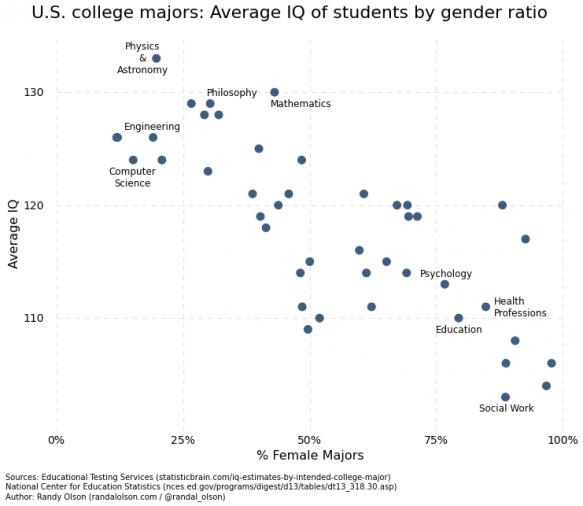 The IQ distributions of the US population are as follows [Ashkenazi(m) Jew (AJ), East Asian (EA), Caucasian White (CW) (the 62.6% population contains Middle Easterners, the g values not!) separated into male (CWM) and female (CWF), Hispanic (H), and Black (B)]: 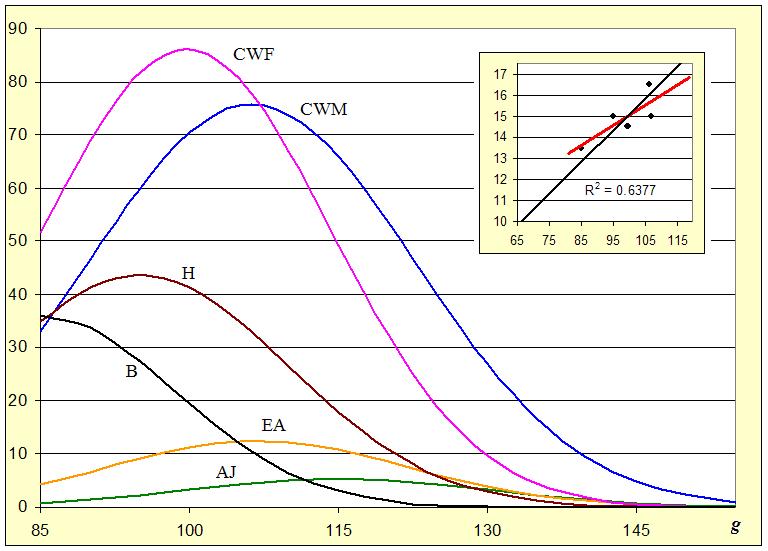 Figure 2 Caption: The IQ probability density functions for the US population, approximated by scaled Gaussians f = 10000 * p * exp[– (g – <g>)2/(2 Δ2)]/√(2Δ2 π). The inset shows the standard deviations Δ versus the means <g>; the AJ standard deviation is taken according to the short red line, which is the empirical linear regression, while the long black line is the linear regression fixed at the coordinate origin and indistinguishable from the assumption Δ/<g> = 15/100 [adapted from S. Vongehr: “From Jewish IQ to Jewish Achievement: A Doubly Right Wing Tail Issue.” Journal of Non-PC Not-Publishable Research (2015), use as much as you like if you want to destroy your career.]

Assume that it is ‘natural’ (WARNING: Nature = Rape) that universities have a lower IQ limit of about 90 and that there is no high IQ limit. Under this assumption, integrating the sub-populations from 90 to infinity, only 47% of the university population would be female and there would be only 6% Blacks on campus! Obviously, this cannot be, because males should be in the minority (they have penises!) and Blacks are 12% of the population.

It is much better to have also a high IQ limit. Naturally privileged high IQ people do not need cushy social science faculty positions to survive. High IQ helps tolerate homelessness and finding food containing trash cans - high IQ people need therefore be removed from their jobs, starting with faculty positions, replacing them with low IQ homeless persons. Assuming a lower limit of 90 and an upper limit of 110, the numbers are 54% women and indeed 9% Blacks! This is almost the 60% observed and the 10% demanded!

In order to advance civilization and beat China, it is advised to adjust the IQ levels of US university populations into an 85 to 105 range, which would be consistent with 56% women and 12.3% Blacks. Both the desired numbers (60% and 10%) cannot be obtained together in this model, but nobody cares about that women are already far over-represented anyway (they do not have penises, so all is good), and it is much more important that the Black university population reflects the Black overall population of about 12.2%, because racism.

Conclusion: Women and Blacks are strongly discriminated against in the US university system. We need revolutionary measures now! I support the current demands of the Black students that have sadly lost their media spotlight due to the French not being welcoming enough toward Islam. Removing all people with IQs 105 and above from US campuses is long overdue. It would improve the overall situation immediately, simultaneously solving both main problems (incomplete domination by females as well as lack of over-representation of Blacks). Such will also for example give a tremendous boost to physics departments, which are traditionally held back by their extreme lack of low IQ individuals.

Taking my own role in this abominable racist sexist Nazi society seriously and taking responsibility, I have gone ahead role-model-style, removed myself from US academia, and even sneaked myself into the Chinese academic system in order to help triggering its inevitable demise from unsustainable high IQ.

Appendix addressed to the Nazis out there: You vermin want something fascist such as a swastika shaped university IQ distribution of 130 and up for faculty. Assuming 110 and up for students, White men would naturally outnumber White women more than 5 to 3 (48.4% and 28.1%), and Blacks would be less than only 1.5% of the student population. In that case, Jews and slit eyes, which are combined only 7% of the overall US population, would make up more than 12% of the student population and thus be justified in their high numbers as they are today, which makes baby Hitler cry.

UPDATE:
Many may have become confused by the sarcasm (white penises mentioned repeatedly). For clarification: It is not sarcasm to ask for lower IQ in order to combat elitism/abelism. Sarcasm is not the reason for why I did not just simply calculate target rates for different ethnic groups on grounds of population weighted IQ distributions. The "great ideas" and science of high IQ people have at least as often brought on disaster and increased suffering as they have abated human suffering. Who is to say whether it is not somehow "better" to have Blacks strongly over-represented in US universities, just as it is today? Doubly relaxed Darwinian selection (buildup of genetic load) and low-IQ immigration rapidly decrease the average IQ of Western populations ("rapidly" used strictly scientifically, namely compared to all other known, more "natural" evolutionary IQ changes, such as Ashkenazim IQ over the last 700 years for example). US affirmative action accelerates even that rapid decay, resulting in universities (and generally institutions) that in many fields can already not compete with East Asia's. However, winning a Darwinian struggle does not prove moral superiority! Nor is the Darwinian macro-struggle thus decided(!), because these issues are soon overshadowed by two inevitable developments:
(a) Robots/AI-sentinels, which, when taking our jobs, will inevitably lead to a stop to the current PC denial of physical/biological constraints ("racism"). All non-enhanced humans will be low-IQ.
(b) Gene modification reducing genetic load and selecting for high IQ offspring [which could be offered especially to Black parents (instead of only to parents in China, as it is now and will increase the already higher East Asian IQ yet further, on top of less genetic load and so on)].
Alpha Meme
More Articles All Articles
About