Although boredom very rarely escapes the notice of those suffering from it, constructing a purely technical instrument for reliably recognising boredom in humans is currently rated as a non-trivial task.

But recently, a team from George Mason University, the University of North Carolina, the Georgia Institute of Technology and the Naval Research Lab, Washington, DC have between them devised a provisional system for doing just that. 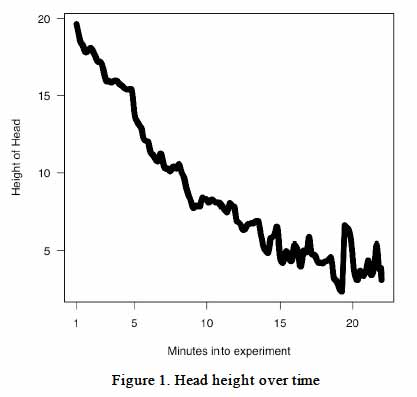 Of the twenty-three undergraduates from George Mason University who were recruited as test subjects for the study, one was found to be an ideal candidate for boredom investigation. Researchers employed a 3-D optical flow tracking system to log head-drooping events of the subject as s/he watched a total of nine boring videos for a total of 22.5 minutes.

It was postulated that head-droop events (see graph above) would indicate boredom episodes in the test subject, and subsequent ratings of the videos by two judges (on a 7-point Likert scale) broadly confirmed this.

[2] “The views and conclusions contained in this document should not be interpreted as necessarily representing the official policies of the U. S. Navy.”

[3] These results remain preliminary because of the single participant examined.