“In Western culture there are countless examples of reference to female legs as a factor in sexual attraction”. 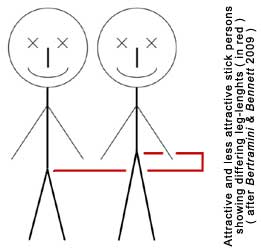 And there is some considerable agreement that “… both males and females perceive female figures as more attractive as leg length increases, in proportion to torso or stature”.

But although previous studies have looked at women’s legs, their relative length, and their attractiveness, there are underlying uncertainties regarding isolating external factors (e.g. waist-hip ratio, muscularity etc) from the results.

A recent research project conducted at the School of Psychology, University of Liverpool in the UK has found a way around the problem by simplifying the test stimuli – and using stick-figures.
In a suite of three experiments, investigators showed variously proportioned stick-figures to more than 150 students (M&F), and asked them to fill-in questionnaires which rated the drawings for attractiveness.

The results provided empirical support for the hypothesis that “… the length of the legs relative to the body of an individual affects perceived attractiveness, and that longer legs are preferred for females, as judged both by men and by women.“

But there are still unanswered questions, as the authors explain – “It is true that society may have created an association between longer legs and femininity, but this still begs the question: what is the possible underlying driving force?”

Nevertheless, the team point out that – “Independent of the issue of leg length, and equally important, is the demonstration that stick figures can serve as a novel and useful tool in the study of attractiveness.”