This is an ex-parrot. It has ceased to be. (Just couldn't resist it, apologies!)

This is the newly named Cyrilavis colburnorum from the Paleogene Green River formation, which is getting to be rather famous for the extremely well preserved birds; it's here that many of the bird specimens for plumage colour reconstruction of fossil feathers have been recovered from.

Briefly, though, I think I'll ram home once again that there is no such thing as a missing link. This fossil is a member of the stem group of parrots; a cloud of organisms clustered around the path on the cladogram, a branch of which eventually gives rise to modern parrots, i.e. crown group parrots. I've even gone to the trouble of knocking up a hasty cladogram in InkScape to make it clear. 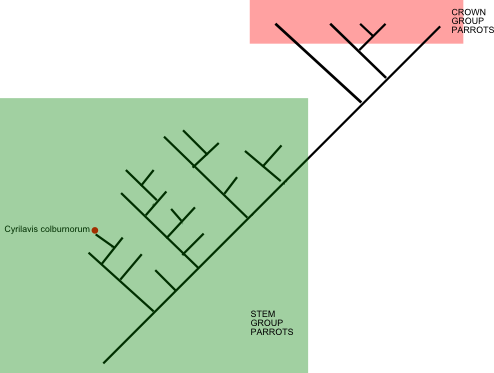 This is representative; it doesn't represent the actual relationships. Remember there's nothing important about the stem on the far right; all of the nodes can freely rotate like a mobile, and that one is only drawn straight for clarity. It's all relative too; though a species of fossil parrot will belong to stem group parrots, it will belong to crown group birds. Also, the fossil specimen is likely to be part of a sequence of transitional fossils; it's only at the tip because we have no data past that (nor do we have any data for all that braching as well, but you get the idea).

So, with that out the way, what does this tell us about the fossil record of parrots? As you might expect, the record is not particularly extensive, but it's more extensive than you might think - it's certainly larger than I expected.

The funny thing is that they are exclusively known from the Northern Hemisphere, whereas modern day ones are known exclusively from the Southern Hemisphere. This is actually a pretty common pattern when you look at the distribution of birds from the Paleogene.
Many have suggested that this is due to the retraction of tropical-subtropical forests. Though, I wonder, because of the few fossils we have, how much of this is due to sampling bias.