Brian
Grone
In 1992, a group of Italian neuroscientists reported that macaque monkeys have neurons that fire not only when a monkey picks up a peanut but also when the monkey watches a human pick up a peanut [1]. Mamma mia! Mirror neurons! Do these neurons, which fire while both seeing and doing an activity, provide a biological basis for empathy? 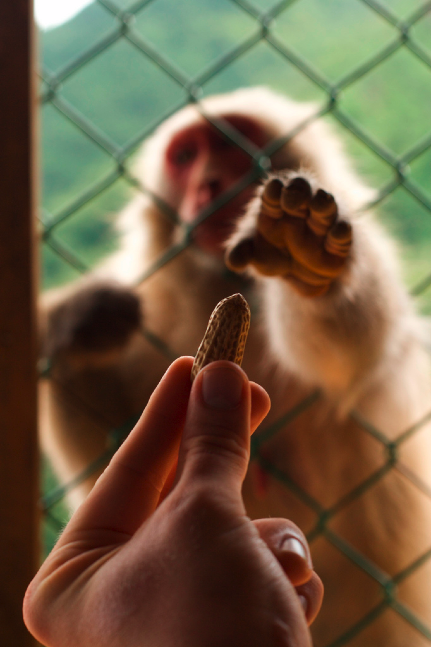 This serendipitous discovery of mirror neurons has spurred hundreds of studies and rampant speculation, with over 700 scholarly articles on mirror neurons published in 2009 alone. In the popular and academic presses alike, people have wondered: Do humans have these neurons? By firing when we see an action performed, do they give us an inner reflection of the mental state of the performer? Could they be responsible for our deep understanding of each other?

The quest is on to discover mirror neurons in humans. Researchers have pulled out the stops, and all the techniques at their command, to find these elusive neurons. The human version of the monkey’s mirror neuron area, called the inferior frontal gyrus (IFG, shown in red in the figure), is active when a person performs a behavior or sees it performed. Until recently, the only evidence of human IFG "mirroring" implicated the whole area rather than individual cells. Just one problem hampers use of electrodes to record brain activity in humans: a perpetual lack of volunteers. One attempt used an epileptic patient whose brain was exposed for surgery, but the electrode picked up activity across huge chunks of the brain involved in movement and language processing, rather than from single cells.

Other experiments in the quest for human mirror neurons have used an alphabet soup of less invasive techniques, including EEG and EMG, both of which measure electrical activity in brain regions via electrodes on the scalp; TMS, which stimulates brain regions through the skull; and fMRI, which gives a three-dimensional picture of brain activity on a relatively slow time scale of seconds. Such studies suggest regions where mirror neurons might live--several regions of the human brain that respond to both acting and observing [2]. But since many different types of neurons exist in those regions, researchers can’t prove that individual neurons respond to actions as well as observations. Therefore, the human brain regions that respond to both acting and observing are called “mirror neuron systems.”

Despite mirror neurons’ uncertain status, researchers as well as journalists have made vast claims for their importance. V.S. Ramachandran, Professor of Neuroscience at the University of California, San Diego, believes that mirror neurons were essential for the evolution of human language and thought, particularly the ability to employ metaphor. The evolution of human consciousness, according to the mirror-neuron-driven model, "was almost certainly a two-way street, with self-awareness and other-awareness enriching each other in an auto-catalytic cascade that culminated in the fully human sense of self. You say you are being 'self-conscious' when you really mean being conscious of someone else being conscious of you." Whoa, man! You’re blowing our minds. But while it provides much gist for budding philosophers, this theory of evolution remains sheer speculation. So far, mirror neurons have only been unequivocally demonstrated in macaques, which have none of our language abilities or ability to reason about others’ understanding of the world.

UC Berkeley Professor Allison Gopnik warned in 2007 about the myths growing around mirror neurons: mirror neurons as seen in monkeys have not yet been found in humans, interpreting the fMRI data is not always straightforward, and even identifying mirror neurons in humans won’t readily tell us what they contribute to the perception of actions or empathy. Despite Gopnik’s argument, pundits continue to employ the mirror neuron as a convenient device to support their pop psychology theories, stating, for example, that “[b]rain research has demonstrated that there are special cells called mirror neurons…” that can be used to explain human learning. With enthusiasm for mirror neurons growing, they have been attributed responsibility for human culture, language, and consciousness, everything from appreciating fine art to learning to play guitar to getting an erection while viewing pornography.

A glance at the titles of two recent studies hints that debate rages on. Earlier this year, Angelika Lingnau and her colleagues published an article entitled “Asymmetric fMRI adaptation reveals no evidence for mirror neurons in humans” [3]. Then, in August, James Kilner and his colleagues published their paper, contrarily named “Evidence of Mirror Neurons in Human Inferior Frontal Gyrus” in The Journal of Neuroscience [4]. It would seem from a cursory look that these papers flatly contradict one another, but the declamatory titles should not be allowed to obscure the truly interesting part of the results: the two groups of authors had different assumptions about what mirror neurons do that led to subtly different experimental approaches. As we’ll see, a closer look at the experiments reveals that the findings are reconcilable.

The phenomenon of “fMRI adaptation,” prominent in both articles, is the process by which neural activity decreases during subsequent activations of a brain region following an initial activation. The term “asymmetric” in the title of Lingnau et al’s paper refers to the different ability of the same stimuli to generate fMRI adaptation, depending on the order of their presentation. Given a pair of behavioral events, such as observing a peanut being grabbed and performing a peanut grab, mirror neurons should show adaptation whether observation comes before action or afterward. If the neurons don’t show adaptation in one situation but do in the other, that’s asymmetry. Such asymmetry of response would suggest that neurons don’t have the same response to observing and performing. If mirror neurons, activated by both observing and performing actions regardless of context, are present, then fMRI adaptation should be symmetrical. Lingnau et al. checked out fMRI adaptation in humans who either watched a hand gesture first or made a hand gesture first. Their finding of asymmetrical response gave them no reason to believe that mirror neurons are at work.

Kilner and colleagues, on the other hand, point out three features that may have allowed them to find evidence for human mirror neurons where others failed. First, they devised an object that subjects grab onto, providing a stand-in for the peanut of the early monkey experiments. Since monkeys’ mirror neurons don’t respond to hands waving meaninglessly about, but rather to interaction with objects, there’s no obvious reason to presume that the human versions of those neurons would react differently. Lingnau’s study used hand gestures without interaction with any object. Such undirected actions are called “non-goal-oriented,” and processing them simply may not be what mirror neurons are good for. Second, Kilner’s group focused their efforts on the IFG. By scanning only the IFG, the home of mirror neurons in monkeys, rather than the whole brain, Kilner et al. collected three times as much data from the IFG as did previous studies. Finally, Kilner and Lingnau used different approaches to decide what part of the brain to look at. Lingnau et al. used anatomy to identify thirteen different regions of the brain. By contrast, Kilner et al. used fMRI data to determine the active regions of the IFG. They did not presume to know which part of IFG contains mirror neurons, but tried to discover it. The steps that Kilner et al. took to maximize their chances of finding signs of mirror neurons paid off: they discovered a symmetrical fMRI adaptation response in the IFG, hinting at active mirror neurons in their human subjects.

Whereas Lingnau et al. found an asymmetrical pattern, Kilner et al. found symmetry. I see two clear lessons that may benefit others in these attempts to use fMRI adaptation. Absence of evidence is not evidence of absence: if experiments haven’t yet found something, that doesn’t mean it’s not there. And the assumptions that researchers bring to an experiment can lead to self-fulfilling expectations. Lingnau et al. set the bar very high for mirror neurons, expecting the poor neurons to respond with vigor to mere undirected hand gestures. Boiling their question down to basics, Kilner et al. demonstrated a simpler, yet remarkable, response.

But can we conclude that mirror neurons like those in macaques exist in humans? Maybe not. Interpreting fMRI data relies on notoriously difficult, complex algorithms and comparisons. Further, fMRI adaptation may not reliably reveal activity of single neurons [5]. Leading mirror neuron scholar Marco Iacoboni, however, claims to have recorded, using an electrode, single-cell activity with mirror neuron properties in a human epileptic patient, but he has yet to publish these results [6]. Such a finding would convince even mirror neuron skeptics of their existence, and it has intrigued journalists who hold notions of cells that could explain sympathetic tears.

Even if mirror neurons exist in humans, the neural bases of empathy surely originate from more than one cell type or brain region. For example, a recent study [7] reported fMRI measurements of subjects' brains while they watched videos of people discussing emotionally intense experiences. Activity in mirror system areas corresponded to correct "readings" of emotions. But other parts of the cortex, thought to be involved in integrating information about social interactions, lit up as well. The complexities of language, emotional comprehension, learning, and “action understanding” likely involve similarly complex sets of brain areas. Nevertheless, mirror neurons remain one genuinely intriguing mechanism by which both monkey and human brains may process the behavior of others. Mirror neurons, with their promise of revealing how we see ourselves in others, will no doubt continue to inspire scientific quest and popular imagination alike.