The first fax machine had no value. It couldn't send a fax to anyone. It was, from a value perspective, useless. 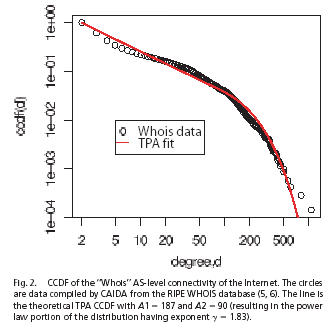 This idea in computer networks is nothing new, it was just considered to be a property of networks themselves.

U.C. Davis researcher Raissa D'Souza discusses new research on this theory of "preferential attachment" in not just networks, where nodes gain new connections in proportion to how many they already have, but how this can be extruded into other areas as well, in the April 10 issue of the Proceedings of the National Academy of Sciences journal, abstracted here.

"'The rich get richer' makes sense for wealth, but why would it happen for Internet routers?" she asked.

In effect they changed the probability that a node with degree ki acquired a link as
by modifying some of the conditions.

"It's exciting because it shows the origins of something that we had assumed as axiomatic," D'Souza said.

This new framework knowledge could make it possible to optimize many different networks, including social ones. Or even social news sites, like the one you are reading right now.

Note: the other authors on the study, which is published online in the journal Proceedings of the National Academy of Sciences, are Christian Borgs and Jennifer T. Chayes at Microsoft Research, Noam Berger at UCLA and Robert D. Keinberg at Cornell University.