Patrick Lockerby
All At Sea With The Vikings

The Vikings had an expression - hafvilla - which indicates a state of being at sea and having no sense of direction.  There are two modern English phrases that cover this situation: 'all at sea', and 'without a clue'. 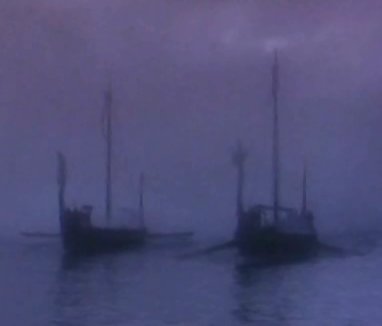 In order to more fully understand the Viking sagas we must learn, not what the Old Norse words mean as translated multiple times down the ages, but what the original words meant to a Viking.

The Vikings used terms for what we would call compass directions in various ways.  To a Viking, in the context of most sailing journeys, North was home.  In other contexts, North was where the prevailing wind blew from.  South was the direction towards the daytime sun.

There's a flag on the mast and it points to the North,
in the North is the land I hold dear;
I will follow the course of the heavenly winds, and back
to the Northland I'll steer.

If you sail to a steady and reliable wind, then it doesn't matter if you lose sight of the sun: your course is going to remain fairly steady.  But if the wind fails and the sky is heavily overcast - or worse, if you find yourself in a fog bank - then in the absence of wind and sun you have no sense of direction: unless you have some sort of compass.

There are grammatical variants of the term hafvilla: hafvillr, hafvillur and hafvillu.  The grammar need not concern us here - our scientific needs are best served by an examination of the etymology.  Haf is the sea - that much is clear.  For example, in Old Norse, a hafskip is a sea-ship, i.e. a seagoing vessel.  Villr seems to equate to the English word 'wild'.  In the context in which the Vikings were said to be hafvilla they were often becalmed.  In what way might a term for 'wild' be applied to a flat calm?

The term hafvilla seems to me to be applied, not to the sea, ship or people, but to the situation.  In what way can the crew be said to be in a 'wild' situation?  The opposite of wild is tame.  A tame animal can be directed in a straight path, but a wild animal cannot.  Nobody would dream of plowing a field with a team of springboks.  Quite apart from their amazing speed, they would be 'all over the place'.  Rowing a Viking ship in the absence of wind would be futile: your course would be 'all over the place'.  Unless you had a solsten.


Solsten - a Viking aid to navigation.

Some of the Old Norse writings state that when Vikings were hafvilla they would use a solsten (sun-stone) or segelsten (sail-stone) to find their course.  The puzzle of the solsten has been addressed before.  It has been suggested that sunstone is a type of rock that helps to determine where the sun is by making use of the optical properties of a natural mineral found in Scandinavia.

Applying the principles of William of Ockham: is it not simpler to assume that the Vikings made use of the magnetic properties of magnetite - a natural mineral found in great abundance in Scandinavia?

There is no evidence that the Vikings used anything resembling a magnetic compass - but absence of evidence is not evidence of absence.  Is it not likely that the Vikings would wish to retain the military advantage of the lodestone by keeping it a closely-guarded secret?  How likely is it that any archaeologist would recognise an early lodestone if found amongst Viking ship remnants?  Would a lump of magnetic rock be seen as anything more than just another lump of rock?