The great thing about the scientific method is that we can figure out what will happen if we do something before we do it.  Scientists figured out long ago that burning fossil fuels and putting CO2 into the atmosphere at a great rate would affect the planet's climate systems.  Which it has.  One of the predictions about the effect of dumping CO2 into the atmosphere was that the Arctic would be affected most.  Which it has been.  Scientists predicted an Arctic acceleration or amplification: a process where positive feedbacks become ever stronger with ever less Arctic ice.  Ice loss is accelerating. 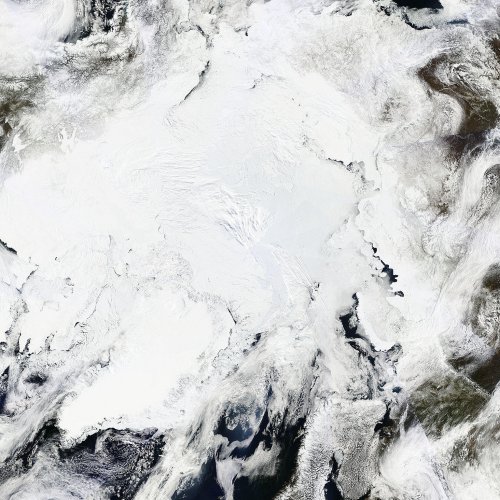 A glance at the current Arctic mosaic satellite image, above, seems to show nothing unusual.  However, with a bit of background knowledge and some more current data we can see more detail, and understand it better.

By measuring the air temperature directly over the Arctic after the end of the summer melt, Serreze found a large amount of released heat. Temperatures in areas losing ice were as much as 5 °C higher over the last four years as compared to the historic average.

The computer models predict this "Arctic acceleration," says Serreze but 20 years into the future. "The models are giving us the big picture of what is going on, but it's all happening much faster than expected," he says.

This change may already be irreversible, as the extra heat creates a runaway thinning of ice that will soon be unable to survive in the summer Sun. If it disappears entirely during the summers, the ramifications would be global.

Arctic warming, like global warming, is not uniformly distributed: some regions warm a lot faster than others.

Four large glaciers in Canada's High Arctic have been continuously monitored since 1963, and "a third to half" of all the ice mass loss that has occurred since measurements began has happened in the last five years, says Sharp.

He says one of the most significant findings of the study is that Canada's Arctic glaciers are about twice as sensitive to ice loss as temperatures climb as expected, suggesting that models used to predict what could happen in future "may be unduly conservative."

All that melting ice is likely to have effects on salinity.  That is what I missed when I wrongly predicted an early April breakup of the Nares Ice Bridge.  A lowered salinity in surface waters means that the ice which forms is less saline than ordinary sea ice - hence generally stronger.

...the northern end of Nares Strait has been experiencing an increase in freshwater runoff since the mid 1980s. The recent changes are most pronounced at the northern end of the strait and diminish toward the south, a pattern consistent with proximity to the apparently freshening Arctic Ocean source in the north and mixing with Baffin Bay waters as the water progresses southward. This increasing freshwater signal may reflect changes in circulation and ice formation that favor an increased flow of relatively fresh waters from the Arctic Ocean into Nares Strait. 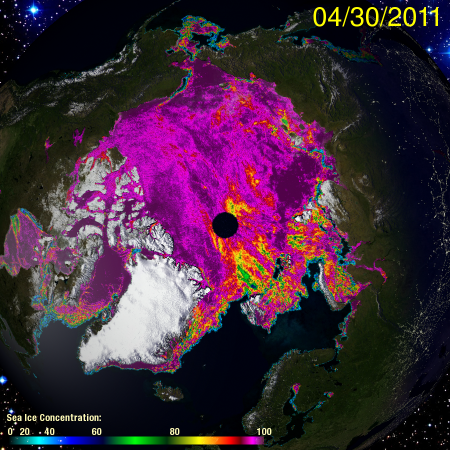 Given what we know about the recent rapid changes in the Arctic climate system, it is unsurprising that images like the one above reveal what is not yet clear in the Arctic mosaic images: there is a great deal of low concentration ice already, at the end of April.  Given that open water absorbs heat and promotes melting, it is reasonable to expect that the sea ice extent will now begin to decline more rapidly.  We may expect the 2011 line in the graph below - which is already touching the 2007 line -  to dip more sharply downwards during May. 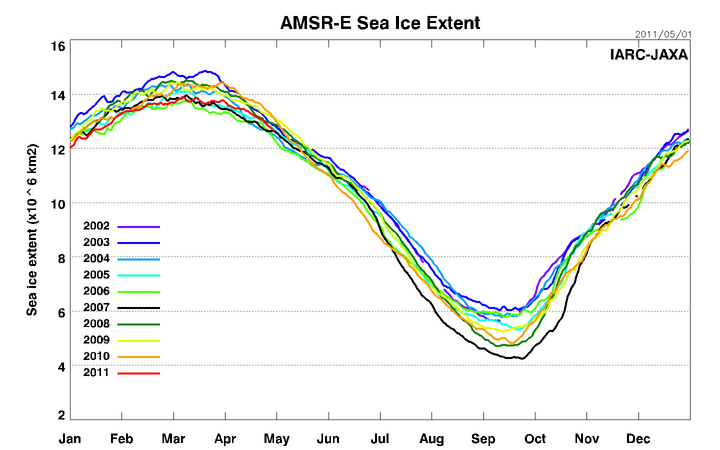 The Cryosphere Today 'Tale of the Tape' continues to show 2011 as significantly different from previous years.  This suggests to me that the 2011 drop in ice extent has barely begun.

It is not just extent, area and concentration that are anomalous.  The oldest and thickest ice is now confined to a relatively small area.  A great amount of ice is 1st year ice and / or is 2 meters or less in thickness, as shown in the next graphic.

In general, the ice is thinner and younger than historical norms.  The Arctic Oscillation has now entered a negative phase which, if continued, will promote further ice loss.

The Arctic is losing ice at an ever-increasing rate.  This should be a major concern to politicians and citizens alike.  Even if we could stabilize our CO2 emissions and prevent global warming rising above 2oC, that may not be enough.  Not only is warming more effective in the Arctic, but Arctic warming is likely to increase the input of GHGs into the atmosphere.  Given what paleoclimate studies tell us about prehistoric Arctic climates, I consider it highly plausible that if we continue with our business as usual profligacy, then the feedbacks from the Arctic climate to the planetary climate system will make our too-late efforts to control CO2 entirely futile.

By studying fossilized seashells from 3.5 million years ago, scientists from the University of California in Los Angeles have constructed an ancient climate record for Ellesmere Island.

Their research shows that, during this period, temperatures were considerably higher in the High Arctic than today.

Three to four million years ago, temperatures from May to September were 11 to 16 C warmer there than the present-day average temperatures of −1.6 to 1.3 C.
...
The Intergovernmental Panel on Climate Change has said keeping carbon dioxide levels at 400 ppm, by reducing greenhouse gas emissions world-wide, will keep global temperature rise to two degrees Centigrade.

Previous research has shown that, for the High Arctic, this 2 C rise will still mean temperatures up to 16 C higher in the Arctic than today by 2100.

Further reading on the current state of the Arctic:
http://neven1.typepad.com/blog/2011/05/sie-2011-update-5-goodbye-april.html

More of my Arctic-related articles:
The ChatterBox Arctic Index
The Chatter Box
More Articles All Articles
About