... the land being very high and full of mightie mountaines all covered with snowe, no viewe of wood, grasse or earth to be seene, and the shore two leages of into the sea so full of yce as that no shipping cold by any meanes come neere the same. The lothsome viewe of the shore, and irksome noyse of the yce was such as that it bred strange conceipts among us, so that we supposed the place to be wast and voyd of any sencible or vegitable creatures, whereupon I called the same Desolation.

John_Davis, 1587
cited by Captain Albert Hastings Markham R.N. in -
Our Life In The Arctic Regions, 1877

The Arctic has changed dramatically since explorers first began to map its geographical features.  Regions which were for centuries unapproachable by ship can now be reached with little difficulty in summer.  Literally hundreds of men died trying to find a polar route from the Atlantic to the Pacific.  This year, two small ships have succeeded in traversing both the North East and North West routes in a single season and are well on the way to completing a full circumnavigation of the Arctic Ocean.

The Cryosphere Today site has a graph of seasonal northern hemisphere sea ice extent from 1900 to 2008.  Their figures are calculated differently from the NSIDC extents.  I have taken their data from 1870 to 2008 and compiled a comparable graph, posted below.  I have extrapolated the end of summer data to include 2009 and 2010, modifying the NSIDC data to conform approximately to the CT data, for purposes of illustration: the 3 data points in the green graph. 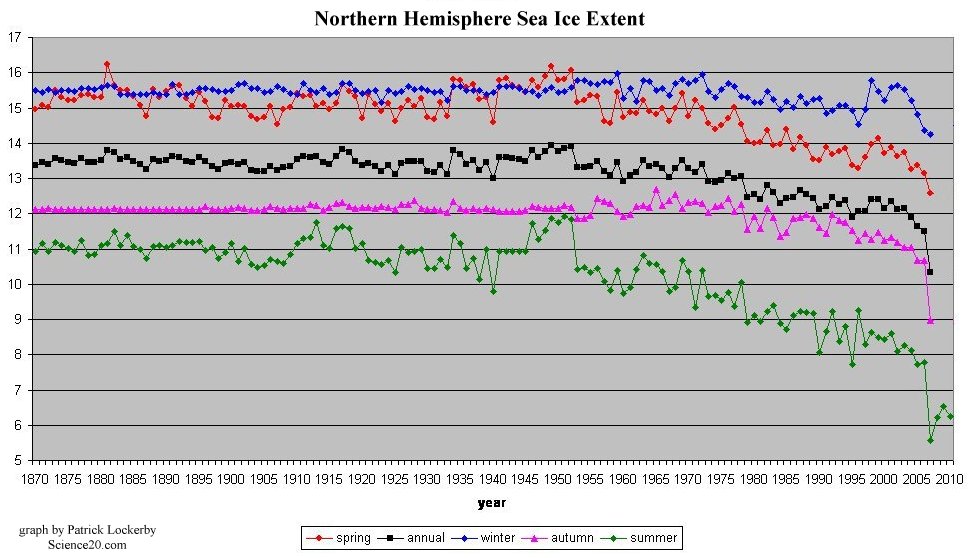 The history of Arctic exploration and discovery is recorded in many books, journals, newspapers, magazines, ship's logs and other printed or written materials.  Old maps and atlases often show Arctic ice limits as far as they were known at the time.  What is clear from this historical data is the gradual ability of ships to travel ever further north over a course of a few centuries. This progress was partly due to the building of stronger ships, each more capable than the last of enduring in pack ice.  However, one simple fact stands out from the reading of historical materials: the Arctic sea ice has been reducing in extent and volume at an increasing rate since the beginning of the industrial era. Since about 1950 the rate of sea ice loss has accelerated further.

This next map, scanned from the 17th edition of Philips' Handy Volume Atlas of the World, 1930, shows the spring ice extent recorded up to 1929.  This map gives some intuitive meaning to the data in the graph above. 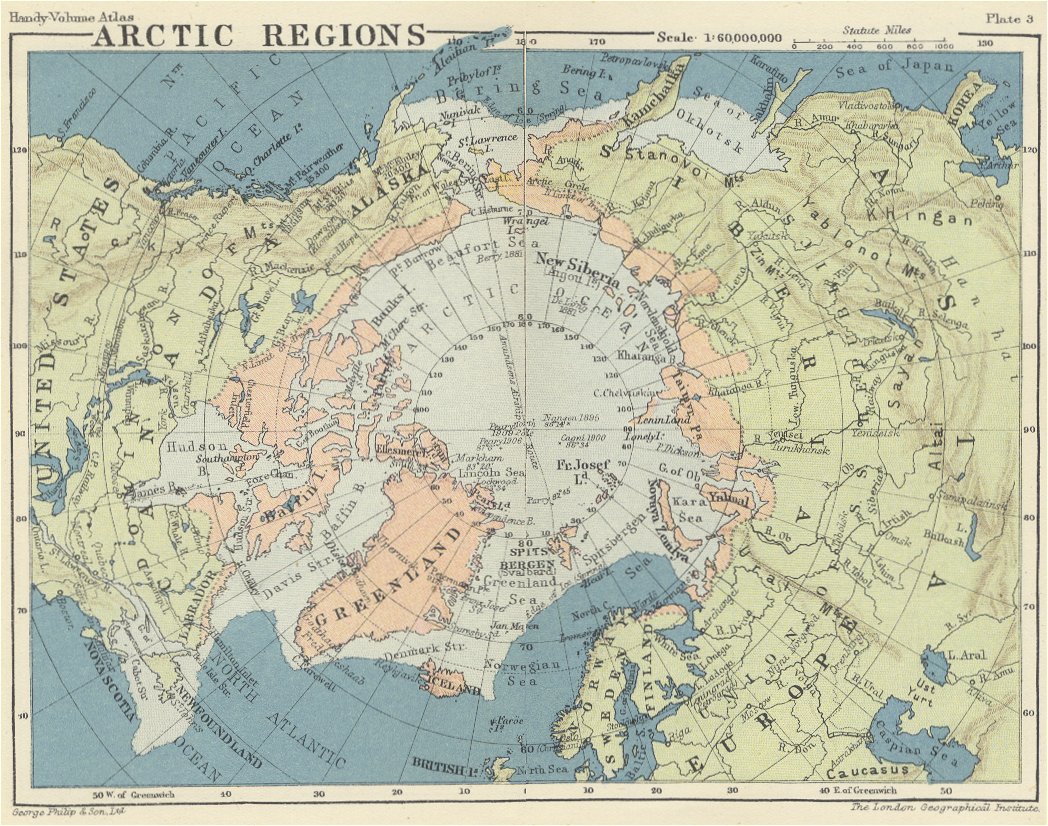 The spring ice extent is shown below - in a 1955 Russian map - as a dashed line.   The 'permanent' and 'impenetrable' central pack is also shown. 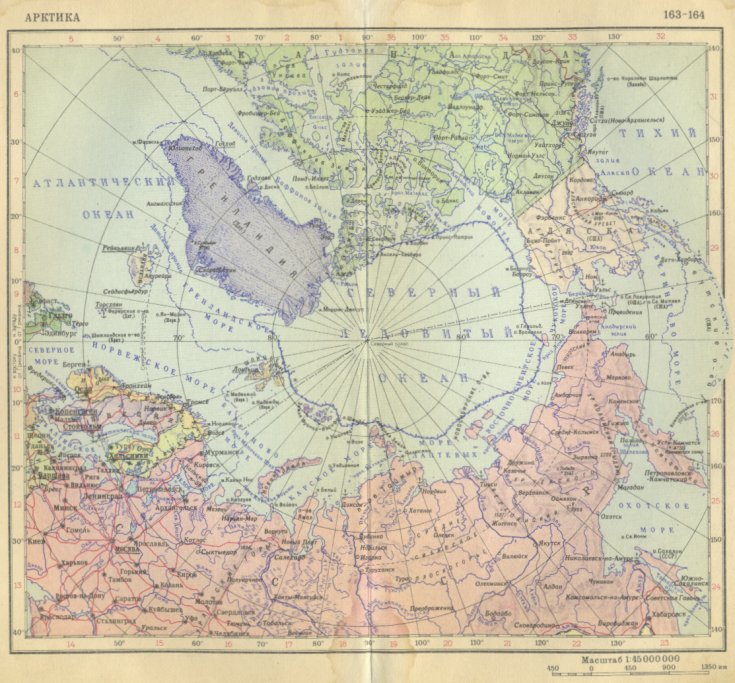 Russian map of Arctic, 1955.
Note the reduction in Spring extent compared to the 1930 map.  The reduction is specially noticeable near Iceland which is now shown as surrounded by open water.

The Arctic was known about in Europe for centuries through myths, legends and travelers' tales. The most consistent descriptions were of a frozen and impenetrable sea extending much as shown in the maps above: a graveyard for ships and men. The history of Arctic exploration can be rediscovered through the many places and features named by or for explorers.  There are also records of 'furthest north' achievements, such as those shown on the 1930 map, above.  To give but one example of a place-name tied to a date: Kane basin was named in honor of Elisha Kent Kane, who surveyed it in 1854 and named it Peabody Bay, the name it still bears in this 1877 map. 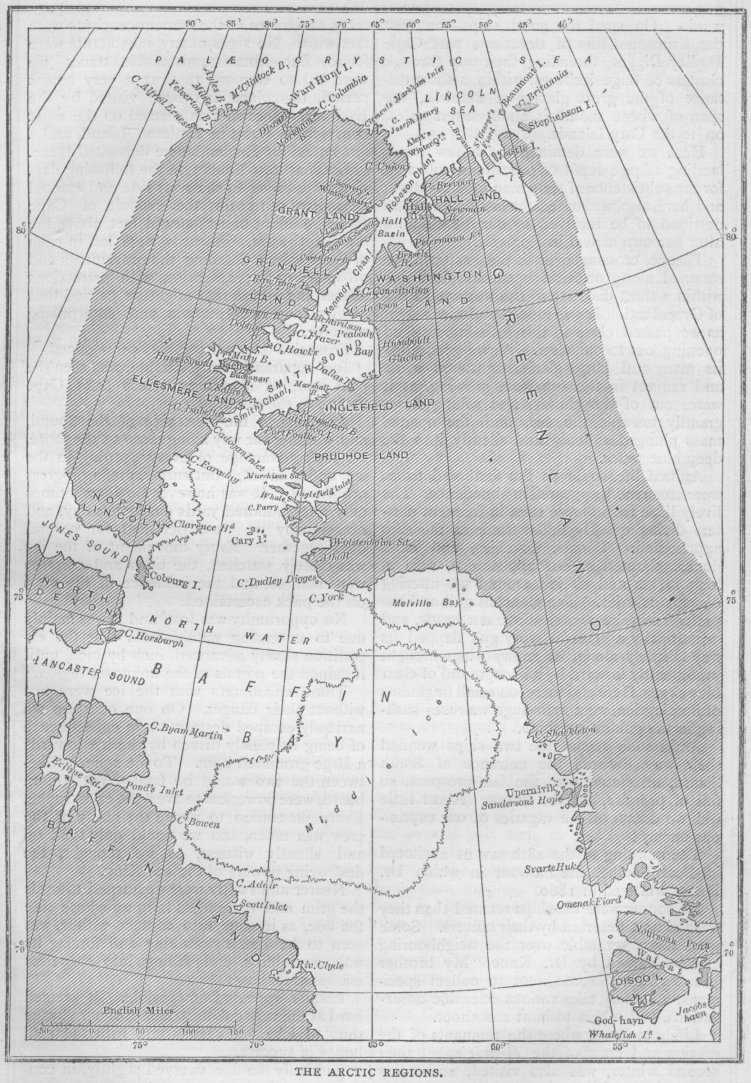 Note the absence of the name 'Nares Strait'.  This map was published while Sir George Nares, leader of the 1875-1876 British Arctic Expedition, was still preparing his report and it was only later that the Strait was named in his honor.

On the sort of site which doesn't deal with real climate science, much is made of the idea of 'open water' in the Arctic.  The suggestion is that open water is not an unusual occurrence.  That is true, but it must be remembered that the term 'open water' is ambiguous: it is entirely indifferent to area.  The term 'open water' is applicable equally to a small polynya or the great expanses of open ocean seen in this, the 21st century.

The Arctic ice has always been mobile and so has always had some amount of open water within the main pack.  Pushed first this way and then that by strong variable winds, continuous ice tends to form cracks called leads.  These can be just wide enough for a kayak or wide enough for a very large ship.  A lead can stretch for a few meters or for many kilometers.  In winter, leads and polynyas are likely to freeze at the surface.

Almost any report of Arctic exploration will make reference to 'open water' at some stage.  In a region where close-packed thick ice is everyday fare, it is only the extremely unusual discovery of a fairly large stretch of open water that is worth reporting.  Unless, perhaps, the explorer is in a submarine, in which case even the tiniest amount of open water is of interest.  In his book  "Surface at the Pole", Commander James Calvert, USN remarked of the 5th polyna found in 1959:

I could see through the periscope two small black spots on the underside of the thin ice.  Suddenly I could make out ripples in them.  It was the first open water we had seen on the cruise.  The puddles, about 2 feet in diameter, showed that the ice in this lead must be very new.

That 'open water' was found in March 1959, about 100 miles from the New Siberian Islands, a few days after surfacing at the pole.  Previously, having found no open water, the USS Skate had surfaced at the pole through a frozen lead on March 17th.  The ice was so thick that it did not obstruct the conning tower with fragments as previous thinner ice had done.  Not only was the ice thick, but it was hummocked to a height estimated at 18 feet, "... the tallest we had yet seen in the Arctic." 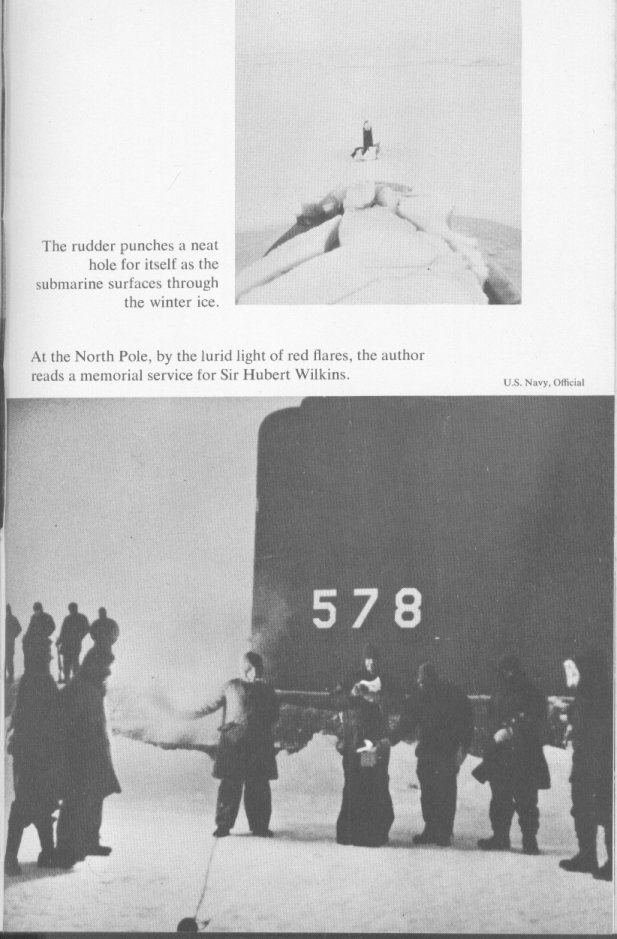 These pictures were taken in Arctic twilight, two days before polar dawn.  Thick ice covers the after deck in the top image.  The lower picture was taken in the light of flares, such as the one held by the crewman, third from left foreground.  The three men on the foredeck are ready to fire a salute following a brief memorial ceremony and the scattering of the ashes of Sir George Hubert Wilkins, MC and Bar.

In the days of wooden ships, the tactic of Arctic explorers was to make for a previous 'furthest north' and then hope to find that local weather variability had produced conditions suited to further progress.  It is very common to find reports of open water where previous explorers had found solid ice.  It is also very common to find that any report of open water is swiftly followed by a report of solid ice, or even of the ship being trapped in the ice.

What follows is from the official report of Elisha Kent Kane on the 1853 Second Grinnell Expedition: 'Preliminary Report of Passed Assistant Surgeon Kane to the Secretary of the Navy, Hon. JAMES C. DOBBIN.'

...
On the 7th of August we reached the headland of Sir Thomas Smith's Sound, and passed the highest point attained by our predecessor, Captain Inglefield, R.N. So far our observations accorded completely with the experience of this gallant officer in the summer of 1852. A fresh breeze, with a swell setting in from the southward and westward; marks upon the rocks indicating regular tides; no ice visible from aloft, and all the signs of continuous open water.
...
As we advanced, however, a belt of heavy stream-ice was seen, - an evident precursor of drift; and a little afterward it became evident that the channel to the northward was obstructed by a drifting pack.
...
We reached latitude 78o 43' N. on the 29th of August, having lost a part of our starboard bulwarks, a quarter-boat, our jib-boom, our best bower-anchor, and about six hundred fathoms of hawser; but with our brig in all essentials uninjured. We were now retarded by the rapid advance of winter ...

Current conditions in a historical context

Historical records show that the Arctic sea ice maximum limit has been in retreat since at least the year 1587 when John Davis reached only about 72° N on the West coast of Greenland, naming the place 'Sanderson his Hope of a North West passage' in honor of one of his patrons.  It appears on Markham's map, above, as 'Sanderson's Hope'.

Judging by historical reports and maps, the trend of Arctic sea ice retreat was quite slow until about about the 1950s.  There was a quite exceptional and brief increase in ice extent in the early 1950s, but post 1950 the downward trend increased.  There has been a further increase in downward trend post 1990s.

The various ice shelves along the north coast of Ellesmere Island appear to have been joined together at one time as the Ellesmere ice shelf1.  Those ice shelves, over 3000 years old, have virtually vanished.

The 'permanent pack' now lies mainly along the north coasts of Greenland, Ellesmere Island and the Canadian archipelago.  At the time of writing, much of that ice is being driven from Lincoln Sea through Nares Strait and is melting in the north of Baffin bay.  As I write these words it is October.  In late August 1853, Elisha Kent Kane was preparing his ship Advance for winter quarters in Smith Sound.  The ship was fully frozen in by September 1st.  That location, chosen for the shorefast ice which would benefit sledging parties, is currently virtually ice free.  There is no shorefast ice along that part of Greenland's coast.

From the vast expanse of ice shown in the maps, the Arctic has changed into a region of vast expanses of open water.  Note that the '15% ice' reported for many areas may be read as '85% open water'.  The explorers from the days of wooden ships would be astonished that their 'inch by inch' progress through thick ice has been replaced by plain sailing in so many areas.

If, at the end of some future Arctic summer, we should find Hudson Bay and Baffin Bay half choked with ice and the east coast of Greenland unreachable by sea due to pack ice, then perhaps we might start to talk rationally of Arctic recovery.  But it would take a substantial change in trends observed since 1587 before we could reach such a point of discussion.