whosoeuer could finde out in what proportion the Angle of the Sunne beames heateth, and what encrease the Sunnes continuance doeth adde thereunto, it might expresly be set downe, what force of heat and cold is in all regions.
George Best, written between 1578 and 1584.

George Best was an Elizabethan scientist, explorer and adventurer.  He was the chronicler of the three expeditions in search of a North West Passage led by Martin_Frobisher.  He sailed on all three expeditions.   He was a Lieutenant on the Ayde (2nd expedition) and Captain of the Anne Francis (3rd expedition).

Best died in a duel in 1584.  As a member of all three Frobisher expeditions he would likely have been born between 1530 and 1540 in order to be old enough to be an officer, but young enough to endure the hardships of an Arctic voyage.

reason perswadeth, the hotest place in the world to bee vnder and about the two Tropikes;

It is common sense that the tropics are hot and the poles are cold.  But Best showed that what 'reason persuadeth' is false: the polar regions in their respective summers receive more insolation than the tropics!

It appears to me from my researches that Best was the first person to record the mechanism which leads to the poles having a greater total heat input in summer than do the tropics.  I propose that this 'polar tropical heating' effect of polar summers should be named the Best effect in his honor.

According to a long-held view of how the Earth warms, most Elizabethans - never having traveled to check their 'facts' -  held that equatorial regions were too hot to support life.  The prevailing view of climate, from Ancient Greek authority, held that there were five climate zones, only two of which were inhabitable.  George Best refuted this notion in his "experiences and reasons of the sphere, to prove all parts of the world habitable, and thereby to confute the position of the five zones".

If the heate of the Sunne in the day time doe burne or parch any thing,
the moysture of the night doeth coole and refresh the same againe, the Sunne
being as long absent in the night, as it was present in the day.

Translation and explanation by George Best

Best expands on this observation of Pontus Heuterus and shows in his writings a clear grasp of the way that the atmosphere modifies the extremes of day-night temperature that would occur without it.  Although he makes reference to moisture, it is not clear that he understood the importance of water vapor as such.  The references to moisture seemingly apply to the cooling of the atmosphere in the absence of the sun.

Best makes clear in his writings, long before scientists like John Tyndall, that the heat of the tropics has nothing to do with the difference in distance to the sun, citing the coldness of mountain tops in Africa as proof that nearness to the sun is irrelevant.

Best noted a key fact of climate science: the amount of heat accumulated in a climate zone depends greatly on the angle of the sun's rays and the number of hours of daylight.  This simple fact was deduced from the fact that the Earth is round.  It is clear from this and other observations in the writings of George Best that the Elizabethans most definitely did not think that the Earth was flat. 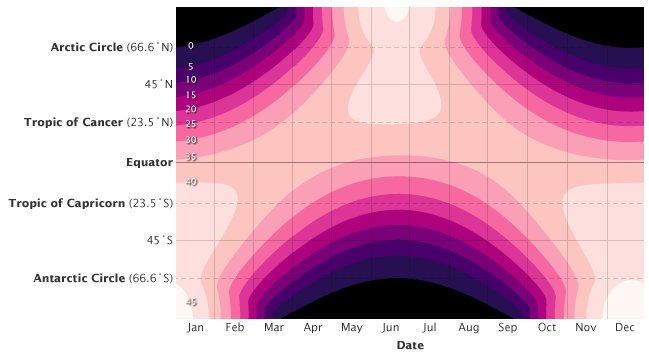 In the “summer hemisphere,” the combination of more direct sunlight and longer days means the pole can receive more incoming sunlight than the tropics, but in the winter hemisphere, it gets none.

In his writings on the summer Arctic heat input, George Best suggests that the ice which caused problems for the Frobisher expeditions can be taken as a proof of the immense quantities of heat which the Arctic receives in summer.

... those infinite Islands of ice were ingendred and congealed in time of Winter, and now by the great heat of Summer were thawed, and then by ebs, flouds, winds, and currents, were driuen to and fro, and troubled the fleet; so that this is an argument to proue the heat in Summer there to be great, that was able to thaw so monstrous mountaines of ice.

It is clear that Best broadly understood that sea ice advance in winter and retreat in summer is only possible due to the great heat input during polar summers and the loss of that heat during polar winters.

For a long time the advance and retreat of Arctic sea ice was variable from year to year but with no obvious long term trend.

It is only since the industrial era that a long term trend of ice loss has become apparent.

Given that atmospheric CO2 levels have risen greatly since the time of George Best, it is unsurprising that the tropical heat of Arctic summers is increasing and is not being entirely released to space during Arctic winters.

For the convenience of my readers, some key passages of most relevance to this article are reproduced below.

A true discourse of the three Voyages of discouerie, for the finding of a  passage to Cathaya, by the Northwest, vnder the conduct of Martin  Frobisher Generall: Before which as a necessary Preface is prefixed a  twofolde discourse, conteining certaine reasons to proue all partes of  the World habitable.
Penned by Master George Best, a Gentleman employed  in the same voyages.

... because it hath bene accompted of the olde Philosophers, that there coulde nothing prosper for the extreme heat of the Sunne continually going ouer their heades in the Zodiacke, I thought good here to alleadge such naturall causes as to me seeme very substantiall and sure reasons.

Heat is caused by two meanes that is by his maner of Angle and by his continuance.

First you are to vnderstand that the Sunne doeth worke his more or lesse heat in these lower parts by two meanes, the one is by the kinde of Angle that the Sunne beames doe make with the earth, as in all Torrida Zona it maketh perpendicularly right Angles in some place or other at noone, and towards the two Poles very oblique and vneuen Angles. And the other meane is the longer or shorter continuance of the Sunne aboue the Horizon. So that wheresoeuer these two causes do most concurre, there is most excesse of heat: and when the one is wanting, the rigor of the heat is lesse. For though the Sunne beames do beat perpendicularly vpon any region subiect vnto it, if it hath no continuance or abode aboue the Horizon, to worke his operation in, there can no hote effect proceed. For nothing can be done in a moment.

And this second cause mora Solis supra Horizontem, the time of the sunnes abiding aboue the Horizon, the old Philosophers neuer remembred, but regarded onely the maner of Angles that the Sunne beames made with the Horizon, which if they were equall and right, the heat was the greater, as in Torrida Zona: if they were vnequall and oblique, the heat was the lesse, as towards both Poles, which reason is very good and substantiall: for the perpendicular beames reflect and reuerberate in themselues, so that the heat is doubled, euery beame striking twice, and by vniting are multiplied, and continue strong in forme of a Columne. But in our latitude of 50. and 60. degrees, the Sunne beames descend oblique and slanting wise, and so strike but once and depart, and therefore our heat is the lesse for any effect that the Angle of the Sunne beames make. Yet because wee haue a longer continuance of the Sunnes presence aboue our Horizon then they haue vnder the Equinoctial; by this continuance the heat is increased, for it shineth to vs 16. or 18. houres sometime, when it continueth with them but twelue houres alwayes.
...
Therefore, whosoeuer could finde out in what proportion the Angle of the Sunne beames heateth, and what encrease the Sunnes continuance doeth adde thereunto, it might expresly be set downe, what force of heat and cold is in all regions.

But the Sunne is thought to giue no otherwise heat, but by way of Angle in reflection, and not by his neerenesse to the earth: for throughout all Africa, yea in the middest of the middle Zone, and in all other places vpon the tops of mountaines there lyeth continuall snow, which is nearer to the Orbe of the sunne, then the people are in the valley, by so much as the height of these moantaines amount vnto, and yet the Sunne notwithstanding his neerenesse, can not the melt snow for want of conuenient place of reflections. Also the middle region of the aire where all the haile, frost, and snow is engendred, is neerer vnto the Sunne then the earth is, and yet there continueth perpetuall cold, because there is nothing that the Sunne beames may reflect against, whereby appeareth that the neerenesse of the body of the Sunne worketh nothing.

Pontus Heuterus was born in Delft in 1535 and ordained as a priest in the same city.  He was captured in Gorinchem by the Geuzen in 1572 but escaped and fled to the Southern Netherlands.  He was a canon at Deventer from 1585 till 1591.  He died in St. Truyden, 1602.