Christopher Monckton presents himself as an expert on climate.

Since he is an expert on climate, it follows that we should all trust and believe him when he says that there is no problem with the Arctic sea ice.

"Arctic ice extent is just fine: steady for a decade"

My dear, if you find science confusing, you should try politics!

Margaret Thatcher, to President of the Royal Society, March 1990 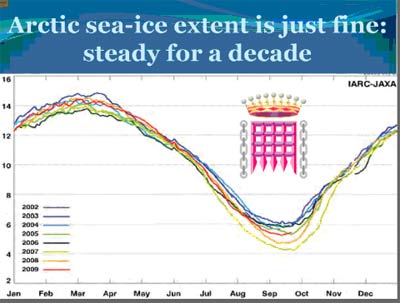 Christopher Monckton has been a very naughty boy.  he's been telling porkies1.

His 'scientific' talks rely on appeals to misquoted authority.  He misquotes climate experts, conflates issues and attempts to sway his audiences with the worst kind of propagandist logic.

Perhaps he learned the art of propaganda from his father, who was the British army's director of public relations in the 1960s and who probably learned much from his own father - who worked in the British government's propaganda department during WW2.

Monckton is second inheritor of a title created in 1957.  He is not, nor has he ever been, a member of the House of Lords.  He likes to use a pretty pink crowned portcullis logo.  He likes the logo so much that he will stick it on any graph, image or document regardless of authorship, copyright and conditions of use.

The principal emblem of the House is the Crowned Portcullis. It is a royal badge and its use by the House has been formally authorised by licence granted by Her Majesty the Queen. The designs and symbols of the House should not be used for purposes to which such authentication is inappropriate, or where there is a risk that their use might wrongly be regarded, or represented, as having the authority of the House.

The crowned portcullis logo used by Monckton uses a different crown.  He might argue that the modification exempts him from parliamentary copyright and the laws of heraldry.  Maybe so.  But I doubt it would protect him from being charged by parliament with the tort of 'passing off'.  Passing off, known as 'palming off' in some other jurisdictions, comprises three elements:

the claimant’s goods or services have acquired a goodwill or reputation in the market and are known by some distinguishing feature;

the claimant has suffered, or is likely to suffer, damage as a result of the erroneous belief engendered by the defendant’s misrepresentation.

Christopher Monckton, by using his title Lord Monckton together with the crowned portcullis is implying that he speaks as a representative of the House of Lords.  He doesn't.  His use of the logo and title is an appeal to authority with himself as the implied authority.

Christopher Monckton doesn't like to disabuse his audience of the notion that he was just an adviser, not the advisor to Margaret Thatcher. He was once just one of many special advisers to Prime Minister Margaret Thatcher.  But not on anything to do with climate.  Monckton relies on implication to have people believe that, since his context is climate, therefor his reference to being an advisor concerns climate.  It most certainly does not.  If, which I doubt, Monckton ever advised Mrs. Thatcher on climate then she most definitely and roundly ignored him.

What we are now doing to the world, by degrading the land surfaces, by polluting the waters and by adding greenhouse gases to the air at an unprecedented rate—all this is new in the experience of the earth. It is mankind and his activities which are changing the environment of our planet in damaging and dangerous ways.
Speech to United Nations General Assembly

... the climate changes which we have witnessed in the past have been mainly the result of natural factors, changes in the Earth's orbit or in the amount of radiation given off by the Sun, for instance—Man's activities had only a small part to play. In the future, this can no longer be assumed. Man's activities are already adding greenhouse gases to the Earth at an unprecedented rate, with inevitable consequences for our future climate.


... in a speech to the United Nations last year, I spoke of the problems of global climate change and its causes, above all the addition of greenhouse gases to the air at an unprecedented rate. Of course, we need the greenhouse effect but we do not want too much of it!

I think that most of us accept this diagnosis yet hardly had I got back when I found that there are researchers who argue—and some were quoted in our newspapers last week—that temperature changes over the last hundred years have less to do with man-made greenhouse effect than with changes in solar activity, something over which we have no control at all.

There is an expression used of Kings and Queens, of Lords and Ladies - noblesse oblige - whoever claims to be noble must conduct himself nobly.  A Lord who will use any propagandist's trick to fool his audience besmirches his own title.  It is high time that he conducted himself nobly, ethically and with the sense of duty and pride in duty that is so very British.


Lord Monckton, being a Lord, has a duty to lead others in the performance, in turn, of their duties.  It is no part of his duty to bang the drum for the anti-science brigade.  He is fond of reminding the world at large that he was once an adviser to Margaret Thatcher.  Perhaps it is high time he learned to take, rather than give advice.

We must remember our duty to Nature before it is too late. That duty is constant. It is never completed. It lives on as we breathe. It endures as we eat and sleep, work and rest, as we are born and as we pass away.  The duty to Nature will remain long after our own endeavours have brought peace to the Middle East. It will weigh on our shoulders for as long as we wish to dwell on a living and thriving planet, and hand it on to our children and theirs.

http://www.stthomas.edu/engineering/jpabraham/
http://www.skepticalscience.com/Abraham-shows-Monckton-wrong-on-Arctic-s...
The Chatter Box
More Articles All Articles
About