Patrick Lockerby
What Color Is An Orange ?


A question like that, here at science20.com, just has to be a trick question.

It is possible, by the application of common sense arguments, to prove to a scientific level of certainty that an orange is absolutely not orange.

Between 41% and 67% of participants, depending on the exact way the question was asked, thought that the eye sent out some kind of ray or beam in order for us to see.

That's not the startling bit.

The startling bit is that the participants in the experiment were college students who, just a few weeks before, had taken an introductory psychology class on perception. As part of this class students had been explicitly told on a number of occasions how people see.

It seems that once an idea becomes firmly entrenched in our minds, it becomes very difficult to dislodge.  It doesn't matter how often we are shown the facts if we can't see them.


How we do see

Way back in Ancient Greece, the way we see things was widely discussed by philosophers.  From around 500 BCE there were two broad schools of thought: extramission theory supposes that vision is accomplished by something coming from the eyes; intromission theory supposes that vision is accomplished by something entering the eyes.  It seems that the people surveyed, above, held to the extramission theory.  That is very strange, because intromission theory has been held to be correct by more and more philosophers since Lucretius wrote about it in 50 BCE.  Today, the idea that we see by means of light coming into our eyes from the thing seen is not so much a scientific theory as an easily proven fact.

And thus I say that effigies of things,
And tenuous shapes from off the things are sent,
From off the utmost outside of the things,
Which are like films or may be named a rind,
Because the image bears like look and form
With whatso body has shed it fluttering forth ...

On the Nature of Things, Book IV
Lucretius. 50 BCE

An object illuminated by white light reflects and scatters some of that light.  In the case of an orange, the light which reaches the eye of any observer is orange.  The light came from whatever source, commonly the sun, and the components of the source light which we call 'orange' were bounced off the fruit.  From whatever angle you view the fruit you intercept orange light.  This is true for all observers.  It follows that the orange light is not a part of the 'essence', the 'is' of an orange.  The property 'orange' is not a property of the fruit but a property of the source of illumination.  Whatever an orange 'is', it is not orange.

Human color vision can be readily understood in terms of a very simple model.  If you use a computer to control the three colors created on a phosphor screen by the three electron guns of a cathode ray tube, you have the essence of a computer controlled color graphics display.  The actual type of computer display is of no importance: the logic behind the display of a color image is the same for all display types.

The human eye, optic nerve and brain all work together as an image processor.  The first stage of that image processing is done by the retina.  In the retina are three types of color receptor.  Roughly speaking these receptors respond to red, green and blue light and are the inputs to our color sensing system.  Television screens and computer monitors  produce three colors and mix them in a way that matches fairly closely the way that we see colors.

When a computer controls the colors on a screen it does so by converting binary numbers to brightness levels for each of the red, green and blue components or channels of the imaging system.  By convention, computers handle binary numbers as words of 8 bits.  A word of 8 bits can encode any number from 0 to 255 decimal.  By another convention we include zero as a light level, making 256 levels per channel.  Thus the number of colors we can generate by using 8 bit numbers to control the mix of red, green and blue - the RGB channels - is 2563 = 16,777,216 colors.  That is enough colors for most non-professional uses and is the basis of the colors displayed in most current graphic images in html web pages.


Inverse video and the 'not' colors

For any set of three RGB values which display a color there is a set of complementary numbers which display the inverse color.  The inverse of any color in this scheme is calculated by subtracting each channel value in turn from 255.  The image below shows the numbers for just one of the many shades of orange in the image, and its blue inverse. 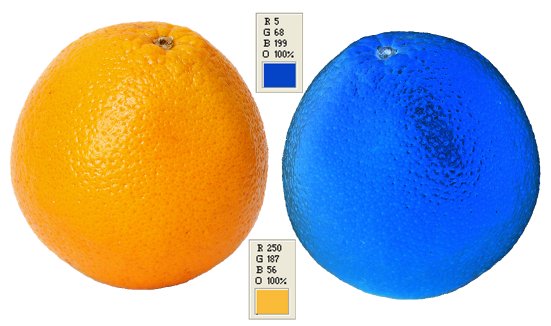 In the same way that white is not black, and black is not white, we can use the concept 'not' for any color and its inverse.  The exclamation mark makes a handy abbreviation for 'not', so we can write -

and since the order makes no difference to the logic we can write this four different ways.

When white light shines on an object, the colors seen by the eye are the colors scattered by the object.  If the object is all of one color - let us call it skypink - then we can say with some certainty that the object receives white light and scatters skypink.  We have seen that skypink + !skypink = white, so a very obvious question to ask now is: what happened to all that !skypink ?

If an object absorbs all the light which it doesn't scatter, what happens to that light?  Does the absorption affect the object in some fashion?  It is now accepted that the light absorbed by a body is converted into heat.  Today we have cameras which can photograph this heat.

Objects scatter some of the light that falls on them and that is how we see them.  The light which they do not scatter, they convert into heat.  The beginnings of the discovery of that particular piece of science can be traced back to Emile du Chatelet, whose paper Dissertation sur la nature et la propagation du feu was published in 1744.  In that paper, she showed that heat and light are two effects of a common cause.  She thus foreshadowed the discovery of infra red radiation. 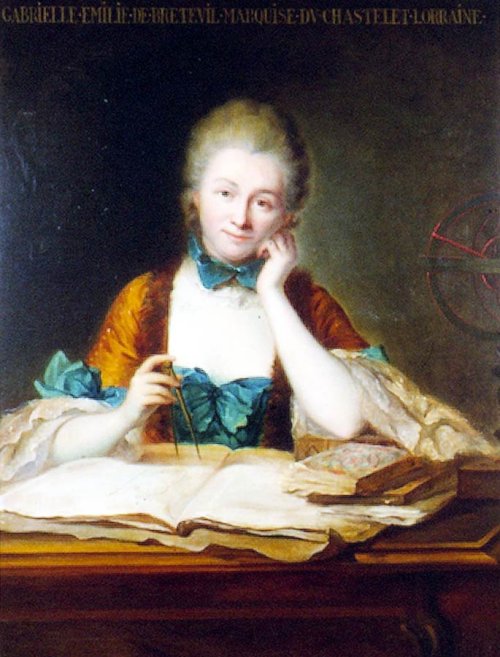 Every object absorbs some of the light that falls on it and converts it to heat.  Every illuminated object thus contains within itself, and emits, thermal energy.  We are surrounded by that thermal energy, or infrared radiation, but it is invisible to us.  Unless heat radiation is somewhat concentrated we remain entirely unaware of it.  But it is around us everywhere.

So, what color is an orange ?
The Chatter Box
More Articles All Articles
About