From earliest times to today, from boat safety pamphlet to engineering treatise on marine architecture: all are agreed that the anchor does the work of keeping a boat or ship from moving.

Machines can do work, but an anchor is not a machine.


A vessel on any body of water is subjected to wind and water forces tending to move it.  In order for it to remain in a well defined geographical area the vessel must in some way oppose those forces.  The notion that any anchor, however designed, can somehow cancel those forces is false according to the laws of thermodynamics.

A ship can maintain position by steaming into the wind or current.  Obviously, this uses energy.  In using fuel to stand still, the ship is matching drag one-for-one with propulsive force.  The effect of the kinetic energy in the wind and or water is opposed by the use of fuel to cause heat-generating drag.  The kinetic energy which would otherwise move the ship is dissipated as heat.

If the wind/water energy is not converted into another form of energy it can only transmit its kinetic energy to the ship, thus causing it to move.  An anchor is not supposed to move.  If it does not move it cannot do any work; it cannot convert energy to heat.  It follows that anchors do not prevent ships from moving, q.e.d.


A brief history of anchor design

The simplest anchor is a rather large rock.  Take one rope, tie it securely to the rock and the boat, drop the rock in the water and you are anchored.  This simple system is so reliable for parking dinghies and canoes inshore that no thought need be taken as to how it works.  It is self-evident: the rock holds the boat in place.  The anchor does the job and the rope is just something to attach the anchor to the boat.  Simple.  But it's not good science.

In a strong wind or tide the forces acting on the boat can cause the rock to be dragged across the lake or sea bed by the boat.  This is called 'dragging the anchor' or 'anchor drag'.  It should not be confused with the term 'drag' as applied to retarding effects cause by friction.

If an anchor has anything approaching a hook designed into it, it will dig into soft bed or it may snag on rock.  The more horizontal the forces acting on an anchor are, the more it will tend to dig in rather than lift.  Where a rope is used it helps to have a weight of some kind towards the head or 'stock' of the anchor.  Modern-day leisure sailors often use a length of chain for this purpose.

From the earliest known anchors to modern oil rig anchors, this has been the principle behind anchoring systems design: make the anchor heavy and make it dig in by keeping it as nearly horizontal as possible.  The size of anchor needed varies in some proportion to the size and shape of the ship. 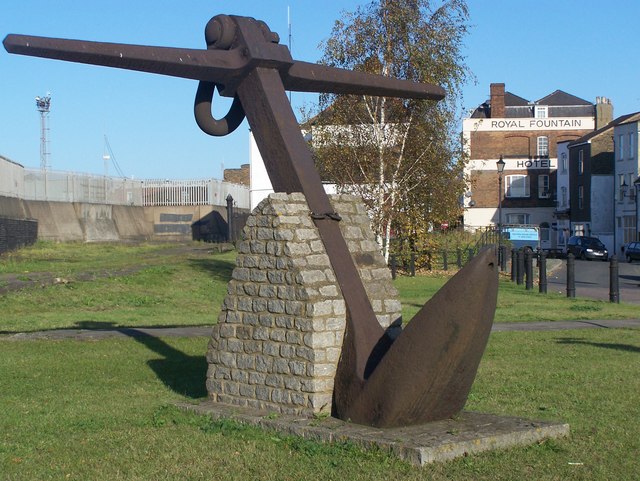 Note: in the following, rode is rope, cable or chain and scope is the amount of it actually let out from the ship or boat.  Rode applied to anchoring is the same as rode applied to horses: it is from Middle English 'riding'.  A ship is said to 'ride' to anchor.  In any storm it is quite a ride.


Imagine that you don't have an anchor for your ship, but you have plenty of chain.  As you drop the chain it starts to lay on the seabed and then, as the ship drifts, the chain forms a curve.  The shape of the chain between the ship and the point of seabed contact is a catenary.  After the point of contact the chain follows the - usually flat - seabed profile.

Building on a long tradition that the science of anchoring equates to the notional tying of a ship to the seabed, marine architects note that a catenary is a mathematically ideal solution to the problem of keeping the "most important item" - the anchor - horizontal.  They then proceed to devote much time and effort to the mathematics of catenaries as applied to scope - the length of chain let out between the ship and the anchor.

Given enough chain, the anchor is entirely superfluous.  In a thought experiment we let out chain with no anchor.  Even when the chain touches bottom, the ship can move by dragging the chain.  As more and more chain is let out, the chain-dragging is less and less.  Long before the chain is infinite in scope, the motion due to the dragging chain stops.  The ship is just as much at anchor as if there were a real anchor.

According to the laws of physics, the primary purpose of an anchor is not to hold the ship, but to hold one end of the chain on the seabed in much the same way that a chain would hold itself.  Given a chain long enough not to drag, any anchor at its end is entirely superfluous.  The anchor occupies a smaller stowage space than the length of chain that it replaces: that is its engineering advantage over chain.  If it is also cheaper than the force-equivalent length of chain, so much the better.

If the anchor rode is considered as merely connecting the ship to the anchor, it doesn't matter much whether it is chain or rope.  The standard view is that there must be enough scope to keep the rode from becoming bar tight in the most extreme circumstances and that it must be capable of withstanding the maximum predictable load in tension.

If the rode is too short there is a good chance that in a storm it will be snatched bar taut.  This will tend to dislodge the anchor.  If nothing breaks, the slackened rode will let the anchor dig in again.  The ship will move in a series of drifts and jolts until either  something breaks or the ship is driven aground.

The only attention given by naval architects and sailors to the physics of the anchor rode is in its metallurgy and tensile strength.  This does not address the issue of its true systems function.


The physics of an anchoring system.

A ship could perhaps be anchored to the seabed by a system of buried anchors and steel bars.  In such a case it could not ride the waves: it would soon be battered to pieces by wave action.

The anchor and rode system allows a ship to move around in three dimensions so as to avoid damage.  The ship is free to yaw, pitch, roll and drift within design limits.  The drift pattern arises from the fact that the wind is not constant.  As the wind blows it distorts the rode catenary upwards.  This represents stored energy.  As the wind drops, the stored energy causes the rode to fall back towards its natural catenary.

On considering the physics of the matter, the most obvious function of the rode is to store and release kinetic energy.  It's least obvious but, I suggest, its most important function is to dissipate kinetic energy as heat.

As wind and tide cause the rode to move about it causes turbulence in the water.  By this means it loses its stored kinetic energy.  By a lesser mechanism, its own internal frictions, it also dissipates energy.

The loss of kinetic energy from the rode to the sea is, I suggest, the single most vital component of the whole energy exchange system that is called anchoring.  Without that loss of energy the ride at anchor would be more violent.  In relatively calm conditions a build up of energy would cause ever more violent motion in the absence of dissipation.

Where any anchoring system connects a structure to the ground by means of any form of cable or chain it must provide means by which heat may be readily dissipated.  Within obvious design limits, the greater the flexibility and heat dissipation capabilities of the rode, the greater the ability of the whole system to withstand violent forces.

Heat dissipation in a rode may be enhanced by increasing its drag.  However, this rode drag will be superimposed on the ship's hull drag, thus increasing the size - hence weight - of rode needed.  If a chain were made of tight pivoting links instead of open links the friction would be enhanced.  Another choice might be a chain of steel bars bonded to an elastic material.  An alternative might be to incorporate, in any ordinary rode, a form of agitator or turbine which converts linear tension to rotary motion and hence heat.

Such a turbine might be combined with an alternator to provide some electrical power to the ship at anchor.  In the case of a leisure vessel it should provide enough power to keep an anchor light lit and to keep the ship's batteries charged in the absence of the owner.

An anchoring system works by converting kinetic energy into heat.  It can do nothing else.

one-armed wooden anchor with a lead-cored wooden stock from a mid 7th-century B.C. shipwreck at Mazarron in Spain
http://www.mazarron.es/ingles/historia/barcos.asp

the art of anchoring
http://www.canadianyachting.ca/how-to-diy/seamanship/the-art-of-anchorin...