Tweet
Today, Planned Parenthood of Greater New York announced it is finally going to remove Margaret Sanger’s name from the Manhattan Health Center, which means they finally recognize what everyone knew; Sanger's first goal of birth control was eugenics.

Sanger was an institutional racist, part of the progressive elite that believed they had scientific justification for advancing white supremacy. She was not alone, she was joined by luminaries such as H.G. Wells and John Maynard Keynes. They had Oliver Wendell Holmes on the Supreme Court, who wrote that a rape victim should be sterilized because he believed she was simply promiscuous and she would be the “probable potential parent of socially inadequate offspring, likewise afflicted”.

But it's the legacy of Margaret Sanger, their founder, that has stigmatized Planned Parenthood so much they were forced to create reactionary talking points bolstering her image. Yet they knew she was against anything but healthy white people. 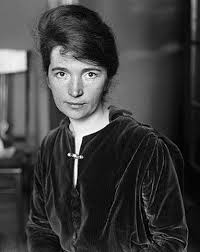 “By all means, there should be no children when either mother or father suffers from such diseases as tuberculosis, gonorrhea, syphilis, cancer, epilepsy, insanity, drunkenness and mental disorders. In the case of the mother, heart disease, kidney trouble and pelvic deformities are also a serious bar to childbearing. No more children should be born when the parents, though healthy themselves, find that their children are physically or mentally defective.” - Margaret Sanger in “Woman and the New Race,” 1920, Chapter 7.

Yet modern Planned Parenthood is impossible to reconcile with her beliefs. They help all women. But any woman of color who knows eugenics has to feel uncomfortable visiting a building where her name is on it. They finally recognized the problem and are facing it squarely.

This is in stark opposition to just a few years ago, when they wrote talking points denying her eugenics legacy, and political allies at outlets like Time rushed to rehabilitate her image.

“Margaret Sanger’s concerns and advocacy for reproductive health have been clearly documented, but so too has her racist legacy," said Karen Seltzer, Board Chair at PPGNY. "There is overwhelming evidence for Sanger’s deep belief in eugenic ideology, which runs completely counter to our values at PPGNY. Removing her name is an important step toward representing who we are as an organization and who we serve.”