Hank Campbell
In the 1966 Harry Harrison novel "Make Room! Make Room!" concerns about population control were the driver of the plot and the storytellers were various people in New York City when the world has reached a population of 7 billion. You have probably never heard of the novel, but you likely have heard of the movie version, "Soylent Green", starring the incomparable Charlton Heston.

Population was a big concern throughout the 20th century. Until the mid-point, the solution embraced by progressives was eugenics - weeding out those deemed less fit and letting evolution take over from there. A decade after the New York Times called it settled science and popular leaders such as Supreme Court Justice Oliver Wendell Holmes had advocated sterilization of those considered genetic defects and turned it into law, the Germans elected Adolf Hitler, who was a big proponent of creating a master race, and it went out of fashion, only to be brought back as...birth control.(1)

In the novel, the world of 1999 had 7 billion people. Water is rationed and when "soylent" (soy and lentil) "steaks" - go on sale, there is a riot. Looting is common. When the dystopian science fiction was turned into a film, the situation was even more bleak, because pop culture scientists like Paul Ehrlich and later his spiritual brother John Holdren made it bleak. The year was changed to 2022. And soylent green was no longer what the poor had to eat in the past - vegetarian food - it was people. It was horrifying. And it was a success catering to those who worried about a new Ice Age and mass starvation. 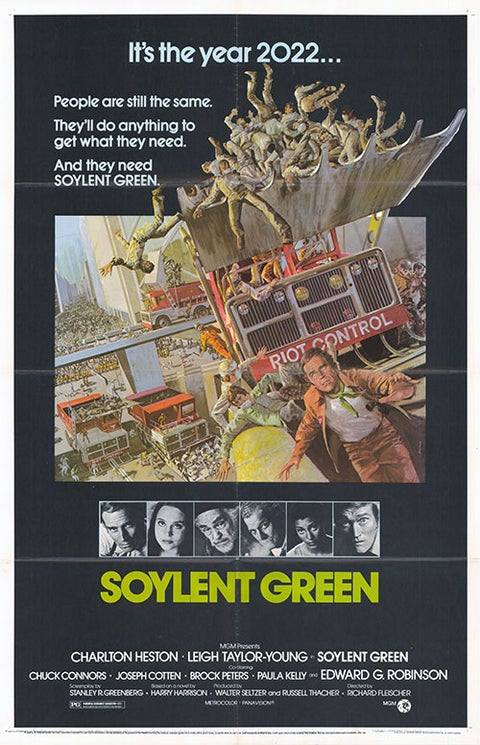 It's 2022. Welcome to the future. Yet we were not eating people. We can thank science for that. And yet another slap to the face to old environmentalists and closet eugenicists who continue their war to keep affordable food and energy out of the hands of the developing world.

In the late 1970s the Population Bomb was still considered real, just like some people still believe oil comes from dinosaurs - it's even weirdly still called "fossil fuels"(2) - but the electricity that powers their Tesla doesn't come from fossil fuels at all. The Ehrlichs and Holdren even wrote "Ecoscience", where they once again hinted that mandatory birth control might be needed, along with the centralized world government to implement it.(3)

By 1980, though worries about population would continue, the boom and bust of food and famine began to level out. We now have crops that grow using less water, less energy, and less land than ever before. Food is plentiful and it is so affordable a $120 billion industry has grown up around making it a "values" issue for coastal elites. Like Sneetches who have stars, they can proclaim they are better than the right of us because they buy a special label.

Instead of mass starvation, food became so plentiful besity began to climb but that is a better problem than starvation. It outrages aging lefties who front for expensive organic food inside Mother Jones when I note that for the first time in the history of planet earth the poorest people can afford to get fat, but it is true, and it is a wonderful twist that rich progressives have to complain about the poor being fed too much rather than them being born, like they did 100 years ago.

The reason for the success was chemistry and biology. Chemistry began to replace old pesticides like copper sulfate, which due to resistance needs to be used in high quantities (now really only used in organic food, where yield is unimportant because cost is unimportant. and maybe they believe it is not a chemical) and GMOs began to make staple crops like corn so affordable we can even use it for boondoggles like government-mandated ethanol.

That legacy of scientific success in the face of dystopian media claims helped when it really mattered recently. Chemistry and biology teamed up to make the COVID-19 vaccines that have saved countless lives. The same chemistry and biology that activist groups denied for decades. Who led the world in vaccine denial before SARS-CoV-2? Rich white people, the same groups who think organic food is more nutritious and that their electricity comes from the sun.

The fight for science is often in opposition to activist groups and their supporters, who make their money being against things. We have been fighting for you since 2007 and for the last 15 years I have joked in talks I give that "'your food is safe' is a terrible call to action" and it is. We are billions in revenue behind groups like Greenpeace and Natural Resources Defense Council and Environmental Working Group, whose primary source of funding is suing governments and companies using shoddy epidemiology, mouse studies, or other observational claims and then settling for big paydays.

But having a terrible call to action, being proud of progress, does not mean it's the wrong thing to do. It only means we can't own the yachts that NRDC lawyers do. Supporting science is something we are instead proud to do, and will continue to do, so I hope you can make it possible with a donation.

(1) Reproductive choice is a great concept of course, but it can't be a shock that Margaret Sanger, who founded Planned Parenthood, was also a eugenicist. She pivoted from optimizing the genetics of white people to preventing births in minorities. It was only in 2020 that Planned Parenthood finally acknowledged that, while they do positive work now, their endorsement of abortion always looked a little queasy to those who saw it was mostly white people endorsing abortions for people of color. Prior to that, they had told everyone she was simply misunderstood (anyone who read her book “Woman and the New Race” must have loved being told they were stupid) and their political allies inside places like Time magazine did their best to claim she was not an institutional racist at all.

(2) Oil comes from microbes. Why the dinosaur business? Modern journalists are educated by Google - odd since they reflexively also claim to be anti-corporate - and Sinclair Oil sponsored a great deal of paleontology the same way Exxon Foundation and Gates Foundation sponsor lots of science now. Their logo was a dinosaur. So somewhere along the line someone claimed that the two must be correlated and it's been part of pop culture ever since. It's ridiculously wrong.

(3) Everyone now recognizes that is codespeak for racism but until the 2000s Holdren still had so much cachet in progressive circles President Obama made him his "Science Czar" - that they love Russian terminology so much was always odd.
Science 2.0
More Articles All Articles
About