Hank Campbell
Soylent is getting ready to feed people - I will spare you a joke about the 1973 dystopian film "Soylent Green", inspired by Harry Harrison's "Make Room! Make Room!", since you already made it in your head.(1)

It's not meat of unknown origin, it is instead a nutrient drink that the company wants to have in grocery stores. It might work. There is the Prepper market, of course, and then the hipster factor - they are no dummies picking that name for their product - but there may also be a market for people who just don't care about food. The way some people are asexual, some are also a-culinary. They may eat as a social thing but on their own they just eat for subsistence and want it functional. (2) Think of the reduced food waste if people who don't care much about food don't cook it and throw it away.

It doesn't sound sexy, but they don't want it to be, they want Soylent to be like water - cheap and plentiful and a staple. If you want to buy expensive water, you can, and the same goes for expensive food. They are banking on the idea that this kind of 'medical food' is a market. So far, it seems to be catching on, and they haven't even shipped a product. They already have $1 million in pre-orders. 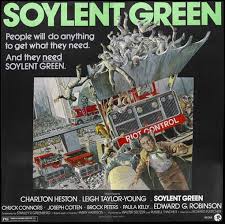 Still has nothing to do with this product but they picked the name so it has to be referenced. Link: Black Hole Reviews.

Okay, if it is not people, what is it?

You can imagine that modern youth has concerns regarding allergens, glutens, vegan-friendliness and everything else the media has taught them to be scared about - and some just want to know what is in food before they buy it. Since this is designed to be a balanced food substitute, they picked ingredients that the Institute of Medicine says are necessary to maintain health and then did tests and experiments to try and get it right. The founder says it has:

Nothing dangerous in there, it's all FDA approved, but also not a happy place for the organic fetish people. And, really, lots of food activists could be outraged by this Frankendrink because, while all of the ingredients are safe, no one has ever combined them all in this way before (3) and that is enough to get protests going.

What about the health impact?  No one who can't eat solid food or gets it through a tube has died due to lack of nutrition so I wouldn't be too worried, but it merits some thinking in the broader world.  As technology journalist Kim-Mai Cutler of TechCrunch puts it, "you’re essentially trusting that because the 50 beta testers and Rhinehart haven’t had serious health problems as a result of living off Soylent, you probably won’t either."

But company founder Rob Rhinehart has a good response to that - “No one really worried about me when I had an awful diet of Doritos and fast food. But now that I’ve invented something that’s good for you, everyone is worried about me killing myself.”

Indeed, while it may not be perfect right out of the gate it just doesn't seem like it could be a problem for anyone's health, but then again I understand GMOs too, which is why I am not afraid of them.

For my Prepper needs, i.e. should the power and gas ever go out for a day, I have good old-fashioned military MREs but if they send me some Soylent, I will try it and report back here. Oddly, companies rarely take me up on these ideas.  I also offered to test ArKay No Calorie, Hangover-Free Whisky and The Carbonator Bottle to make beer on the go. Still no bites.

(1) Oh, fine, you won't stop thinking about it until I show a clip:

(2)  At least I think, I don't know any of those people, my friends are all foodies. Our neighborhood poker nights are even super-competitive, cuisine-wise.

(3) That's a joke, even the worst anti-science hippies are not that deranged. Well, I hope...
Science 2.0
More Articles All Articles
About