Tweet
I can save you some time. If the first few episodes of "Star Trek: Lower Decks" are any indication, CBS All Access won't be retaining a lot of new subscribers who signed up to watch it.

It's no secret that "Star Trek" from the 1960s and "Star Wars" from the 1970s hold a grip on cosmic fiction in culture, and they do so without much overlap. Their hardcore fandom, outside 'nerd' sterotypes on television shows, is pretty distinct. I prefer "Star Trek" because it's a little lighter in tone than the Sturm and Drang of the "Star Wars" universe, and that makes it perfect for a comedy.

And there is no better open field for comedy potential than the bowels of a starship, where glory hound captains never venture because they're off doing something in violation of the Prime Directive.

There is a long-standing joke about a "red shirt" being the kiss of death in "Star Trek"(1) so stories about the mundane, funny things that occur in any job where you're not the boss, you just make sure the water is running, would be great fun. If Kenny can die in South Park over and over, there's no reason that a red shirt can't die in some preposterous fashion each episode. Or when a command comes over the intercom to report to the transporter room for no one to want to go.

But we get none of that. The show is instead not sure what it wants to be (see also: "Space Force") - action, adult black dramedy in cartoon form? If you had hoped to see "Enlisted", a show about soldiers doing rear guard duty except in space (and you do want to see that), you'll be disappointed because it instead looks like two different shows competing for time. 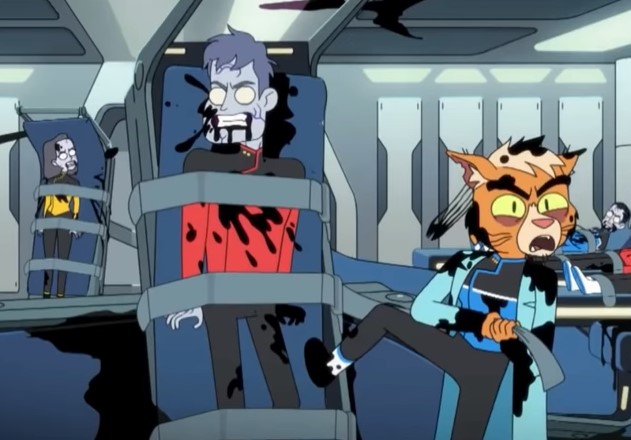 It's about as funny as it looks. And that's disappointing.

I am not some elite hard sell when it comes to shows, either. I laugh at "Mike and Dave Need Wedding Dates" every time I watch it in the yard. And I love the Kelvin universe "Star Trek" J.J. Abrams helmed. Their characters don't inhabit the same universe, though. I can't fault the animation but just like use of color theory shapes how you regard scenes in movies, animation style determines the vibe you expect. Instead of the comedy you expect, or much comedy at all, you get action with characters you don't know. It isn't the acting. Most people will know Jack Quaid from "The Boys" but a lot more should know him from "Plus One", where his comedic timing is flawless. There is no blood spurting in "Plus One" but it's certainly for adults and it's the funniest film of last year.

That leaves a final uncomfortable consideration. Maybe the "Rick  &  Morty" guy just got lucky one time and this is a money grab.

Obviously it's not over after four episodes. "Parks  &  Recreation" sort of limped along for almost two seasons before it figured out what was wrong, and by season six had arguably the best finale of any show ever. But in 2020 we really need a great comedy so I hope they figure out what they want the show to be sooner rather than later.

(1) It's true that security and engineering have more gross numbers of casualties, that's because there are a lot more of them than there are bridge crew or science and medical staff - and they're the defense team. There are 300 red shirts running around.