Wait, aren't the Republicans the ones who don't trust vaccines? Only for the last year, and only for political reasons. California, which once had more vaccine deniers than the entire rest of the US combined, suddenly claimed to be pro-vaccine. Except weird places like San Francisco told people they needed four shots. And to wear masks outside.

That is not pro-science, it means you don't trust it at all. Just as always.

It may also be that some have become inflicted with a psychological malady known in Japan, where masks have always been common; maskaholism. Mask dependency. An addiction to hiding one's face.

They don't think that, of course, addicts never think they are addicted to something until long after everyone else realizes it but as science journalist John Tierney writes in City-Journal, masks being pulled up and down every time you take a sip of water on an airplane are in defiance of what every health care professional knows about mask efficacy. Government forcing airline employees to be law enforcement arms of TSA in the air were not helping anyone. Masks have benefits when used properly. Mandates did nothing but create casual criminals out of people who would've worn them had a more positive approach been taken. 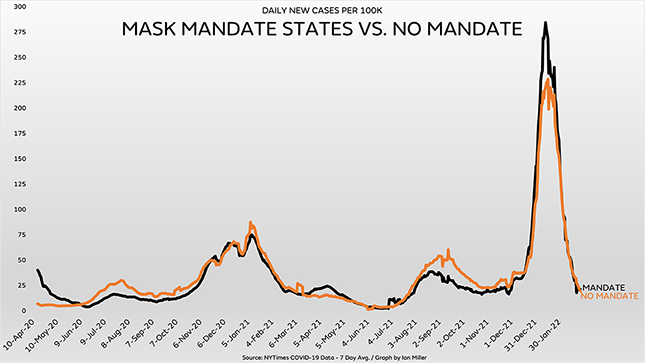 People who are comfortable wearing masks should continue to do so but there is instead a kind of fundamentalism built up around the issue now. Some don't need to feel safe, they don't need to feel like they are helping people, they just need you to be forced to pretend they are right.

I was in the military and everyone in the military has been exposed to tear gas. It is part of your training. You go into a giant tent with a mask on and then you have to take it off. That stuff works. You will produce more mucus than you will ever have thought possible. But the filter on every modern airplane is guaranteed to be better than those gas masks used in training.

Regular masks flipped up and down every time you walk into a grocery store? Nope. Instead, the US CDC and the United Nations WHO agreed there was “no evidence that face masks are effective in reducing transmission” of viruses. That all changed during the COVID-19 pandemic and some of it makes sense even if the science was the same. I could not figure out why people were sticking bottles of Purell everywhere and Clorox was flying off shelves but if it makes people feel better, it's their money, and it is no more useless than Tamiflu.

People buy Tamiflu because they get to feel like they did something. And so it was with a lot of the hygiene theater we saw related to COVID-19.

“The nail that stands out will be hammered down” is a phrase in Japan. It means just what it sounds like; don't be different. Oddly, hammering any nail sticking out farther than any other has been adopted by the same demographic who claim they want to celebrate diversity and freedom of thought. It is just the opposite. It is also un-American to demand mindless uniformity.

On masks, use them if you want, but if you have become a maskaholic, don't call everyone who actually trusts the science a Republican. Despite what politicians will try to claim this November, science has no political affiliation.