Tweet
It's an election year and the third coronavirus pandemic of the last 17 years so Resistance Journalism has lots of targets for its culture war, which is to say the War on Republicans.

So we have been treated to claims that Trump didn't do enough to prevent coronavirus deaths by letting CDC handle it after they previously claimed he did too much when he put in travel restrictions after WHO said it was unnecessary, because SARS-CoV-2 couldn't spread human to human.

And then stories of defiant tweets about right wingers not wearing masks because they are awful people.

Well, half of coronavirus tweets are bots, and their methodology is right out of the playbook China and Russia have used since Twitter began, so we can dismiss those. What about the other half?

A new HuffPost/YouGov poll finds that the 99 percent of journalists on Twitter complaining about Republicans are out of touch with the 96 percent of Americans not on Twitter. In the broader world, only 8 percent of Americans see wearing a mask as "a sign of weakness." Hardly a reason to panic. That is a lower percentage than deny vaccines on the west coast of the U.S. - before we passed a law to mandate vaccines some schools in Marin County had 74% denial so from an infectious disease point of view 8% is pretty great. 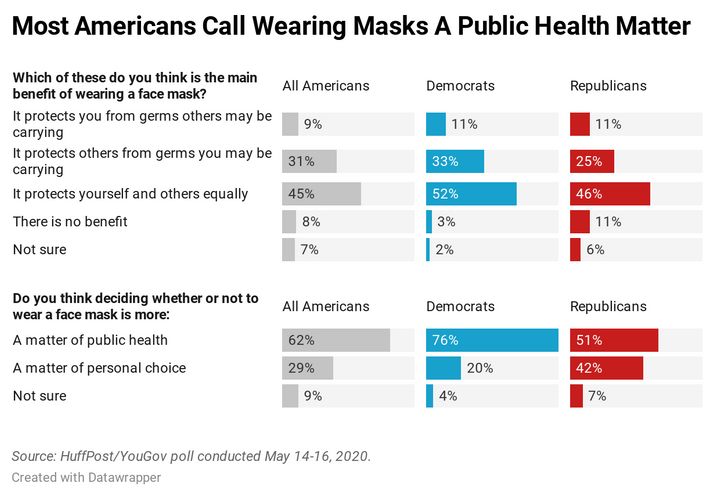 Now, there is a real difference between action and surveys, as we were reminded of in the November 2016 election. Republicans, for example, are far more skeptical of climate change science than Democrats on surveys, but when it comes to behavior they recycle and conserve energy as responsibly as nearly all Democrats.

Given that, it could be that the schism over masks is even less than the poll shows; it may be 8 percent on surveys, where there are no repercussions, but it may be only 4 percent in behavior, because they may have kids and that brother-in-law with the beard who says "hella" and shops at the organic co-op so they just don't want the drama.

I wear the mask, even though I was among the first to criticize China for its cover-up, I criticized Trump for his travel restriction, and I have routinely noted that flu will kill twice as many in an average year as this year's coronavirus will. Because you have to read the room. My mother-in-law has three of the risk factors for COVID-19 to be a fatal disease. But if you think some guy in Oklahoma not wearing a mask is going to harm her, in some miraculous daisy chain of events, you are engaging in infectious disease homeopathy, a butterfly effect of transmission, not science.