Alex "Sandy" Antunes
A good science fair project typically takes less time and is more interesting to do, than a bad one.  Does this make sense?  Do you want to spend extra time having less fun?  As a sequel to last year's "Secrets of a Science Fair Judge", I present to you my suggestions for making your science fair project go faster, be more fun, and still get you a higher grade.

The first and most important thing in doing your project is to choose an interesting.  Pick an idea that makes you think, "hmm" or "wow" or "wait, that is a good question!".  It doesn't have to sound 'sciency', it should be a real question.

It can (and probably should) come from everyday life.  Some examples of potentially interesting questions include:

"which hits further, an aluminum or a wooden baseball bat?"
"Which room of my house gets the hottest?"
"Will a longer barrel on my homemade 'PVC marshmallow gun' shoot further?"
"Does the shape of a baking soda volcano affect how much lava spills out?"

Choose something that interests you.  If you're not interested in it, why do you think we judges will be?

It should only take a day to run

Choose something you can do in 1 day or over a weekend.  Do you really want to spend a full weekend setting up, modify things twice a day for two weeks, then spend another weekend measuring and fussing with things?  Wouldn't it be better to set up, take your measurements, and then be done with the experiment part?

Projects that can be done simply and cleanly in one day, or over one weekend, often result in better science as well.  If you can do all your data collection quickly, you minimize outside influences and contaminations and have stronger data.  It also gives you more time to do thinking beforehand and writeups afterward.  Plus, your time is valuable. 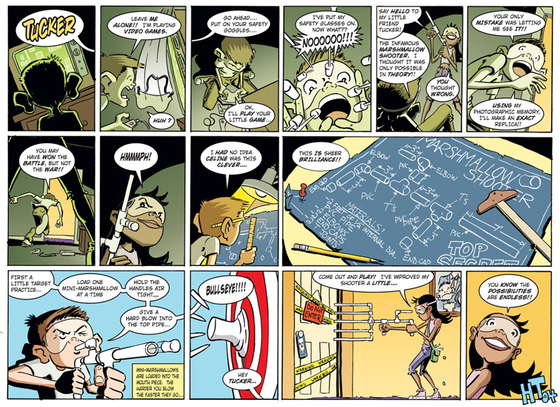 Related to this... avoid plants.  Sorry, I know plant stuff is popular, but trust me.  Plants are difficult.  They take a long time to run the experiment, you have to set up a lot of them, they're surprisingly hard to measure and (being living things) they behave erratically even if you're really diligent about how you do it.  They are also strongly effected by many things that are hard to control-- equal amounts of light, temperature differences, shading differences, even down to different seeds just being born with slightly different potentials.  If you have to do a life experiment, use sea monkeys (brine shrimp), they're quicker and more consistent.

Have 1 thing you change and 1 thing you measure.  It's actually a stronger experiment (as well as being easier to do!)  The cleanest experiment is going to give you the more clear result.

It is better to compare several quantities or level of a single thing, than lots of different things.  Put another way, compare quantities, not oddities.

For example, don't compare which melts the best between salt, baking soda, and pepper.  Instead, compare how the amount of salt affects melting.

In short, if you're using 3 chemicals or 3 shapes or requiring 3 measurements, you can make less work for yourself and have a better experiment if you eliminate choices down to 1.  Measure 1 thing for a variety of levels or concentrations, instead of measuring many things poorly.

As a warning, simplifying is good but being clueless is not.  So don't pick something that the answer is known and obvious: does light help plants grow (yes), does adding layers of insulation reduce melting (yes, by definition-- that's what insulation does!)

Something that seems obvious but isn't is fair game, but harder than it sounds.  'Does adding more wheels make a cart roll faster' could be interesting, for example (build a model wooden car with 4 wheels and roll down a ramp, timing it; then add a middle set of wheels, time it; then add more; is there a point where more wheels just don't help reduce friction?)

Even for an overly obvious example like "does light help plants grow", you can salvage it as a project if you make a numerical prediction.  All you need to do is rephrase the question.  "Does doubling the amount of watts double the plant growth", perhaps?

With that in mind, for all experiments you need to...

Commit With Your Prediction

Simple or not, make sure your prediction (the hypotheses) actually makes a firm prediction.  Don't say "things will be different", that's wishy-washy.  Say in which direction and by how much.

It's 2 simple bits: which direction, and how much.  The longer barrel will shoot further and doubling the barrel doubles the distance.  Adding salt to ice will slow melting and double the salt halves the freezing rate.

Don't worry about being wrong with your prediction.  In science, wrong is fine.  Wrong is often good.  What is important is to commit to something that you can then test.  Otherwise, you'll be stranded in nowhere land with nothing to write about.  Saying "I said it'd be different and it was" does not get you a good grade, or give you much to write about.  Saying "I thought distances would double but they only went up by 25%" gives you a Scientific Result.

In short, you want to predict the behavior, not just answer a yes/no question.  And again, don't worry about right and wrong too much.  If you already knew the answer, there wouldn't be a point in doing the experiment.  You could just write a research paper instead.  And speaking of research papers...

Background Research: Not a Little, Not a Lot

Don't neglect your preliminary research-- but don't kill yourself on it, either. It's not a research paper, you're not supposed to know the full answer when you start. There's no point in running an experiment where you already know the complete answer, and why.

Hit Wikipedia if you wish (yes, we know you use it), but also visit 2-4 of the reference links Wikipedia lists at the bottom, where they got their info.  Do not use one source or one opinion.  You only need to research something until you can:

If you go to a doctor and say you're in pain, they'll ask you how much on a scale of 1-10, 1=none and 10=excruciating. They apply a scale to something that doesn't have one.  You can do the same.

Plants are weird.  If you're measuring the effect of light on plant growth, you'll often discover that the worst plant, that in total darkness, will grow tall and spindly-- taller than the others.  It puts all of its energy into one stalk desperately seeking light.  A happy plant, meanwhile, may be lush and green like an overflowing bush, but have little height.

If you're measuring growth, your measurement should match what your judgment agrees with.  If a short but lively, bushy, vibrant green plant is measuring less than a spindly near-death tall stalk, your choice of measurement for 'growth' is wrong, not your measurement itself.  Choose a better measure.  For plants, try plant mass (weight the plant at the beginning and end of the experiment), or spread it against a sheet of paper and see how much total plant area you can trace out.  Or cut down the plant and weight that.  Be sure you measure what you think you're measuring.

Don't just say whether your hypothesis was right or wrong.  Give how much.  Use adjectives: "little change" or "strong change", "big effect" or "small effect".

Come up with why you think the experiment turned out its way.  The experiment 'which room of the house is warmest' measures temperature, but the conclusion uses detective work.  Was it the highest room, the one closest to the thermostat, the kitchen, those with south-facing windows, the one with the least air circulation?  You're still measuring a number (temperature), but the answer is not a number but a more complex entity, 'room'.

Earn bonus points for criticizing yourself

In your conclusion, go back and criticize yourself.  Mention things that may have caused the results that you did not expect or measure.  Talk about how you might set up an even better experiment for the same question.  Bring up something that, in retrospect, you could have done better.

In short, criticize yourself-- and you'll get extra credit for doing so.  How often do you get to boss someone around in school-- never?  Well, in science, you can boss your 'past self' around by saying things you should have done.  And any problems or mistakes you point out are something that you can't be downgraded for, because, hey, you mentioned it before the teacher did!

Why Should Others Care?

Think of why your experiment might be useful to others.  This goes back to having an interesting question.  When you're done-- why should we care?

Does studying melting ice help us predict ecological changes due to global warming&cooling?  Why yes it does.  Does understanding how items mix help us make tastier food?  It might!  Does making a better marshmallow gun suggest ways to build a better army?  Sure!  Think of your experiment as a 'teaser' to future work that could give us a better understanding of some small subset of our world.

Intrigue us with your question and surprise us with how it might be used.  Then, you won't just earn a good grade and potentially win awards.  You'll also enjoy doing the experiment.

But I Hate Science!

In sports, you run into problems like "how can I get past their defense".  In business, it might be "how can we sell more products" or "what should I invest in".  You do a little research and come up with a couple of strategies.  Then you test those strategies, and try variations.  You measure your results (by score, by profits).  Then you look back and understand what worked.

Stuff that didn't work-- that's useful information, because you can avoid it and stop doing it.  Stuff that works, you keep.  Then you test out some new ideas, repeating the process.

As long as you're being forced to do a project, I suggested you choose something you're interested in.  That's also good advice for life.  Choose something you're interested in, make predictions, and see what happens. You won't always call every prediction correctly, but if you put thought into it, you will succeed in your journey.  That's a science fair secret for life.