Alex "Sandy" Antunes
How can you test for disaster without freaking out all your co-workers?  Assume the best way to test for a disaster is to simulate it.  Now factor in that a typical co-worker, if they overhead that a chlorine tanker overturned in DC or that terrorists are storming the building, will likely freak out.  Is there a safe way to simulate an emergency?

Enter zombies.  Often literally.  It turns out that you can do good contingency operations exercises by seeing how people respond to a zombie infestation.  Case in point, this year we're running a Contingency Operations Plan (COOP) live exercise at Goddard Space Flight Center (GSFC).  This is the second so-called 'Zombiefest' live exercise.  Despite the undead elements, we're deadly serious about it.

The theme is "information that any individual or group possesses in an emergent situation can be incomplete, misleading, or even outright wrong; yet, decisions still need to be made."  In the real world, there may exist plans for handling disasters, but (as Hurricane Katrina showed) the plans may be unclear, outdated, hard to access, or simply not specify who is in charge of what.  Whether the threat is earthquake, chemical spill, terrorists, or undead incursion, plans only go so far.  Ultimately, your main resource is people, and how they can handle and adapt to a plan determines your survival and success rates.

The event is a 2-hour 3-phase simulation for multiple 6-8 person teams.  The location is a NASA base, and the threat is, of course, zombies.  The backstory asserts that we are several days into a zombie invasion, and that GSFC is helping to coordinate a cure dispersal in collaboration with the CDC, NOAA, Wallops Flight Facility, and NASA HQ.

The use of zombies as a threat has advantages beyond 'not freaking out passerbys', but it's important to restate that anyway.  Imagine you're at work and you hear a nearby meeting discussing how best to deal with a deadly chlorine cloud heading for your worksite.  You might, understandably, be a little freaked out.  Or imagine you're heading to your cubical when you spot black-clad weapon-toting commandos walking through the door.  In today's day and age, you'd be justified in panicking a bit.

The trick to doing a good 'live fire' simulation is to ensure that people not participating don't panic.  That can lead to lawsuits or even friendly fire.  Look in the papers to see how people (over-)react to nearby paintball games or even school responses to overly realistic Halloween costumes. We've become hypersensitive to the prospect of real workplace violence, and any simulation has to account for that.

Zombies provide a safe alternative.  While everyone can agree and understand they are a threat, no one will mistake them for a genuine real-world emergency.  By framing a disaster scenario using fantastic elements, you preserve the idea of risk (at the cost of realism) and enable the real world lessons-- testing preparedness and human response-- to emerge.

In short, by using zombies as a threat, we're using our brains the way they should be used.  As food. 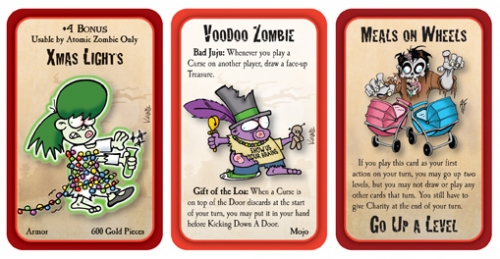