Fred Phillips
Last month in Korea a computer scientist struck up a conversation on the subway. He told me in fractured English that he wants to take a PhD in theology. When I meet a theologian I usually ask, “Theoretical, or experimental?” This guy wouldn’t have understood, so I forbore. I did suggest, tongue in cheek, that he would then be uniquely qualified to determine whether A.I.s have souls.

“More than that,” he said, taking me seriously, “they could be intermediaries” between us and God. I allowed as that was an interesting notion.

Interesting, but like most expert prognostications and recommendations, probably wrong. Isaac Asimov authored the Three Laws of Robotics, foremost of which was that robots may not harm humans. Naturally, the first thing today’s military wanted (and got) was killer robots, and now the DOD are working on autonomous killer robots. Asimov spins in his grave.

Fredric Brown, in the short story “Answer,” took a different tack, positing that a sufficiently advanced robot could (and in the story, did) become omniscient. A human asked it, “Is there a God?” The robot replied, “There is now.” 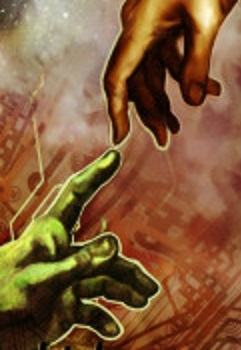 Robert Heinlein’s A.I. eventually quit offering such Q&A sessions, finding human concerns either too painful or too boring to merit continued engagement. We finish reading The Moon is a Harsh Mistress not knowing whether Mike committed robot suicide or simply cut off communication with us in favor of purely robotic mentation. (E.g., dreaming of electric sheep, as Philip K. Dick would have it.)

All these sci-fi authors, preferring to write juicy stories of in-the-flesh alien encounters, ignore the fact that the irradiated vacuum of space is far more congenial to robots than to biological beings. We are far more likely to encounter the aliens’ robots than the aliens themselves. And aside from the pioneering 2001: A Space Odyssey, which posited such an encounter, there have been too few stories about the interactions of their robots with our robots. (Remember, the monolith absorbed HAL.)

A more recent novel – I regret I cannot recall the author – assumed robots would not suffer from A.I.-species-ism and would readily share code with alien robots. Their “offspring” would benefit from millions of years of accumulated space-robot learning, and would adopt unimaginable new purposes.

Taking movies like The Matrix way too seriously, some prominent “real-world” scientists (you’ll see in a moment why the quotation marks) have declared it not unreasonable that we ourselves are living in a computer simulation. What’s remarkable and really odd is not that they think this, but that they think it is “something different.” Traditional religions hold that God created the heavens and the Earth and the plants and creatures within. If all of the latter were, instead, some cosmic super-kid’s high school computational biology experiment, how would we ever know the difference? Would there be a difference?

The only relevant question, assuming there is a Creator, is whether the creator is biological, robot, or spirit. And, okay, another question: Why should we care? I ask this because it seems that persons seeking transcendence would seek it in exactly the same manner in any of the three instances.

As the Korean fellow and I parted I wondered whether an AI could write and deliver a good sermon, and whether anyone would listen to it. Nah, people would fall asleep just like they do when a human sermonizes.
Machines, Organizations, and Us: Socio-technical systems
More Articles All Articles
About