1:1 In the beginning Newton declared space and time. 1:2 And space was without form, and void; and darkness was upon the face of the deep. 1:3 And Newton said, Let there be force: and there was force. 1:4 And Newton saw the force, that it was good: and Newton divided force from straight motion. 1:5 And Newton called force change of momentum, and straight motion he called momentum conservation. And the evening and the morning were the first day.

1:6 And Newton said, Let there be a force in the midst of matter, and let it divide matter from energy. 1:7 And Newton divided matter which were under influence of the force from energy which were above the force: and it was so. 1:8 And Newton called the force Gravity. And the evening and the morning were the second day.

1:14 And Einstein came and said, Let there be movement between the light to divide absolute from relative; and let them define time: seasons, and days, and years. 1:15 And let them render space and time one: and it was so. 1:16 And Einstein created a principle; a single principle to rule the dynamics of matter and also to rule fields. 1:17 And Einstein applied it to the firmament of the heaven to cast light upon the doubters, 1:18 And to divide reality from the darkness of the ether: and Einstein saw that it was good. 1:19 And the evening and the morning were the fourth day.

1:29 And All said, Behold, we rule the quantum field, which is upon the face of all the universe, and every piece of space and time, yet we fail to understand how the quantum bends space and time. 1:30 And it was so. 1:31 And All saw every quantum gravity theory that was made, and it was not good. And the evening and the morning were the sixth day. 2:1 Thus space and time refused to yield to the quantum. 2:2 And despite all their work they made; nobody found rest on the seventh day. 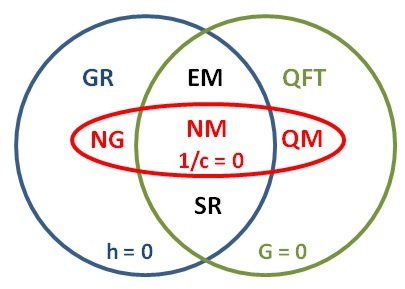 Specific theories are labelled as follows:

Quantum gravity, the elusive theory of everything, is represented by the area external to the two circles.
The hammock physicist
More Articles All Articles
About