Hank Campbell
The most popular organic fertilizer is feces while the most popular pesticide is copper sulfate. Both of those don't sound great to ingest but a new study says that extra dung leads to more bacteria - and that may be a good thing, if you believe a lot more bacteria is beneficial to gut health.

Yogurt marketing and supplement claims aside, there is no evidence that your body is impacted by probiotics unless you suffered a legitimate medical issue (as in you need an actual fecal transplant), yet like gluten-free diets probiotic foods have become a trend among people with extra money to spend. The same people who buy organic food.

For that wealthier demographic, a new paper has good news; organic food has a lot more bacteria, but the authors believe it might be a good thing. It's okay to be skeptical. Chipotle didn't make fewer people ill when they started touting their organic ingredients (not the cheese, the beef or the soda, but the burrito was non-GMO at least), a lot more people started vomiting because of increased bacteria and viruses, and if you drink raw milk, you are asking for a day on the toilet, but no one has implicated organic apples yet. 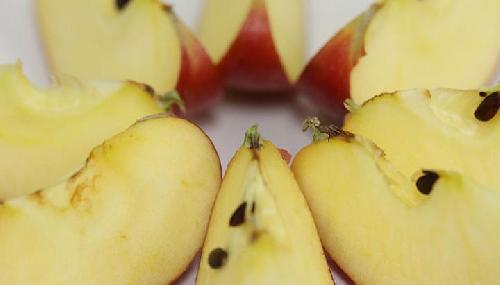 Some skepticism is warranted. The authors suggest organic apples may actually be tastier because of different bacteria, and that doesn't make a lot of sense, unless you believe that being able to detect the gravitational effect a fly in your kitchen has on the moon means the moon is being thrown out of orbit by the fly. Taste is unlikely to be noticeable because the pesticide has an organic label. It is common for people to take different kinds of food grown in a region's particular soil and declare because they like that food more, it is the type pf sticker on the chemicals used in the process rather than the giant, glaring differences in the food itself.

To shore up their belief that organic apples must be healthier because, you know, organic, they bought conventional and organic apples and analyzed the parts (1) and had to be disappointed to find they both contained about 100 million bacteria.(2) So they switched gears and found that the organic apples had more diverse bacteria. And if you are going to virtue signal about your food, telling your Manhattan friends that your apples are more diverse in their probiotics than the apples those peasants between NYC and Frisco eat means you are winning the Living Your Best Life Award that day.

Some of those bacteria might maybe perhaps possibly be correlated to an increased chance of better health some day, like the Lactobacilli that yogurt marketing groups are always going on about. And if you truly want to believe organic pesticides taste better than conventional pesticides because they cause more bacteria, it gets even better; there was more Methylobacterium. Sure, that really only matters in strawberry flavor, but it gives you a new term to drop when you are swishing the organic apples around in your mouth and describing the bouquet for your friends.

"Freshly harvested, organically managed apples harbor a significantly more diverse, more even and distinct bacterial community, compared to conventional ones," says study senior author Professor Gabriele Berg of Graz University of Technology in their press release. There is an opening on all those organic trade group paper-writing committees that discredited economist Chuck Benbrook used to occupy, so Berg may be the perfect person to sit in on those new Environmental Health Perspectives articles claiming organic food just tastes better.

(1) Even the calyx, that part at the bottom where the flower used to be. I didn't even know what that was called but it sounds a lot more like science if you list uncommon words.

(2) That sounds like a lot, but it really isn't. It's about as many as you'd get on an apple. Still, if you are going to write a paper but don't really have anything conclusive to put in, throwing around cosmic numbers helps sell it.
Science 2.0
More Articles All Articles
About