Hank Campbell
Does the world need another sweetener? With debates raging over cane sugar, corn sugar, beet sugar, raw sugar, and numerous zero-calorie alternatives to sugar, new products would seem to be just another thing for Center for Science in the Public Interest to manufacture lawsuits about.

The debate may be why Brazzein, from the fruit of the West African Pentadiplandra brazzeana plant, never got any commercial traction despite being 2,000 times sweeter than sucrose but with zero calories. It's not a sugar at all, it's a protein. For 25 years it's remained a novelty. (1)

Modified bacteria may be the key

Bacteria get a bad rap, outside those stupid probiotic yogurt commercials. In reality, bacteria are a tool in science, like anything else. Insulin, for example, is made with bacteria.(2) A number of proteins, including enzymes, are made using bacteria, but producing complex disulfide bond containing proteins remains difficult(3), say University of Oulu scholars, so they developed CyDisCoTM (cytoplasmic disulfide bond formation in E. coli). In their process, mammalian proteins are introduced into E. coli bacterial cells and the genetically modified bacteria can then produce functional disulfide bond containing proteins.

As a test-case they produced brazzein. They were not the first, brazzein was interesting to manufacturers because the taste profile is similar to sugar and it does well when cooking, but experiments with bacteria and yeast didn't work well because cysteine amino acids formed disulfide bonds. 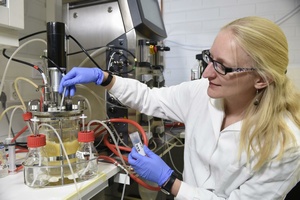 Will it take off? If Stevia is any indication, brazzein will have challenges. There are lots of sweetening options, and even the War on Sugar has been lost, though some food fad diet practitioners continue to insist it is the type of calorie and not the total that is the obesity problem.

But with no calories and performing well in baking, not to mention that it can call itself a protein rather than a sugar, it may have a chance.

(1) Technology moves on. For its first 50 years, hydraulic fracturing (fracking) for natural gas was also not viable, but once President Bill Clinton and Senator John Kerry shut down future nuclear energy in America by declaring in 1993 that any scientific research could be weaponized, emissions shot upward due to the necessity of more coal instead of carbon-free nuclear in the U.S.. To compete, wildcatter George P. Mitchell took on fracking again, using what Big Oil believed were played out wells, and advanced it enough that we now retain low-cost energy with far less emissions. Our energy emissions are so low the free market achieved in 2017 what the abandoned Clean Power Plan would have mandated by 2025.

(2) A genetically modified organism, the first true GMO ever made commercial. Though organic food trade groups insist they can taste the difference between regular rock salt and rock salt that has been given a Non-GMO Project label, hundreds of millions of diabetics, including those who only eat organic food, are just fine.

(3) "Many proteins require disulfide bonds in order to fold. If the disulfide bonds are missing the protein does not fold correctly, but forms aggregates inside the cell. The correct three-dimensional fold of a protein is essential for them to work in their assigned roles, for example, as enzymes or as hormones,” says University of Oulu Professor Lloyd Ruddock.
Science 2.0
More Articles All Articles
About