Cashew Spread Is Not Butter And States Are Closing Regulatory Loopholes FDA Will Not
By Hank Campbell | June 24th 2019 03:00 AM | Print | E-mail

Hank Campbell
Ever since President Clinton turned the Dietary Supplement Health and Education Act of 1994 into law, taking away federal authority over food and supplements unless bodies started dropping, the US Food and Drug Administration has been a little timid in doing the things it should do. Obviously it still approves products, but it has acted more like an agency buffeted by politics. When grassroots vaping caused smoking to drop, they responded to narrow political interests on the coasts, who were supported by both pharmaceutical and cigarette money, and basically declared all non-pharmaceutical smoking cessation products should be banned.(1)

A new administration came in and quickly reversed that, modifying the date when new products had to go through approval and giving companies plenty of time to comply. They also streamlined generic drug approval. 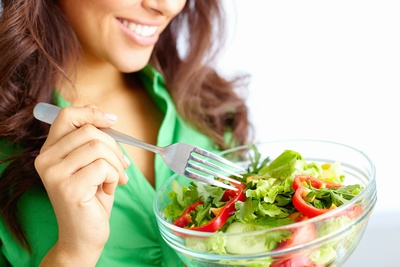 People who buy a lot of salads have let marketing companies convince them that they need to think salads are hilarious - and that orange and teal must frame everyone who eats plants. But they will never convince people these are butter or rice or bacon. And they shouldn't be allowed to claim they are. Image: Storyblocks

But one persistent issue has been food. They let Non-GMO Project deceive the public by claiming rock salt, water, or any product with a credit card, is non-GMO even if it there is no GMO version. Even if it is not an Organism (O) to Genetically(G) Modify(M), like salt. And supplements continue to run unchecked unless a body count is about to happen. FDA has been timid about food ever since the Clinton administration perhaps because people more woo-based (a quick look at the demographics of Whole Foods stores will show that) and such people are loud and active.

Seven years before FDA was neutered on food health and supplement claims, FTC got involved to tell Kraft they could not even advertise that its singles contained five ounces of milk (2) because of the implication the cheese might have as much calcium as 5 ounces of milk when it only had as much calcium as 3.5 ounces of milk.(3) Today anything can be called cheese. Or butter. Or milk. You name it, and it's open season for companies to exploit th vacuum left because FDA is spending its time costing companies a billion dollars and 15 years for Drug(D) approvals instead of bringing clarity to the Food(F) in their name.

After criticism from Henry Miller, MD, founding director of the FDA’s Office of Biotechnology, in the Wall Street Journal, FDA Commissioner Scott Gottlieb, MD, tweeted he was going to start looking into this, but he left before it could happen.

States are doing the job FDA will not. Recently, Louisiana governor John Bel Edwards joined six other states by signing a truth in labeling law for food. No more vegan bacon, broccoli rice or other deceptive marketing practices are allowed. Wisconsin is no longer allowing cashew spread to pretend it's butter. This makes sense, if the cattle industry can't roll out vegan meat ('for bi-vegans whose veganism is exploratory and includes meat') then cashew paste shouldn't be called butter.

Trade groups insist that no one they know is confused but it isn't about how much confusion their paid surveys show, it is about truth in labeling. It is also not about a free market (4), at least not when regulatory agencies treat Kraft one way and vegan companies get to operate under their own set of rules.

FDA is too timid to take on the false claims being made in the food industry, and USDA regards all food as their domain, so they won't stand up for any particular group of farmers over another, and that leaves it up to states. But America should not have patchwork laws for truth in labeling any more than California or Vermont should attempt to hijack commerce using their arbitrary beliefs about science.

(1) Yet they couldn't outright ban them without cause so they instead took the role of Congress and and decided any product created since it first became popular would have to go through registration, which was a de facto ban.

(2) As we have seen in San Francisco with their 'weedkiller causes cancer' lawsuits, a jury in an activist friendly (i.e. anti-science) region like San Francisco may decide what they want, like plants are people, but an appellate court uses evidence and often throws this stuff out. So a few years ago when trial lawyers tried to claim Parmesan cheese was "full of sawdust" because cellulose could be detected, a judge laughed them out of court and the class action suit was decertified. The same demographic that thinks a weedkiller will cause human cancer also believes milk should not be pastreurized and dominates anti-vaccine thinking.

(3) The Consumers Union (the company behind Consumer Reports) in-house magazine incessantly hammers food companies - unless they are using the "organic" manufacturing process. That is likely because Michael Hansen of Consumers Union is the go-to guy for both organic trade groups and Dr. Oz, he is a good friend to both the alternative food and alternative to medicine industries.

(4) An amusing way for vegan trade groups to plead the alternative about regulations, since their members want to suppress the free market and ban meat. Strangely, free market groups need to maintain ideological purity so much they will probably side with companies who want to sell something using capitalism while lobbying to have competitors banned, in that way The Onion once joked that the ACLU defended the right of Nazis burning ACLU headquarters down.
Science 2.0
More Articles All Articles
About